The song that began in a church basement moved to the lawn of Parliament Hill today. Hundreds of people showed up to sing Harperman, the protest song written by Tony Turner, a migratory bird specialist with Environment Canada. 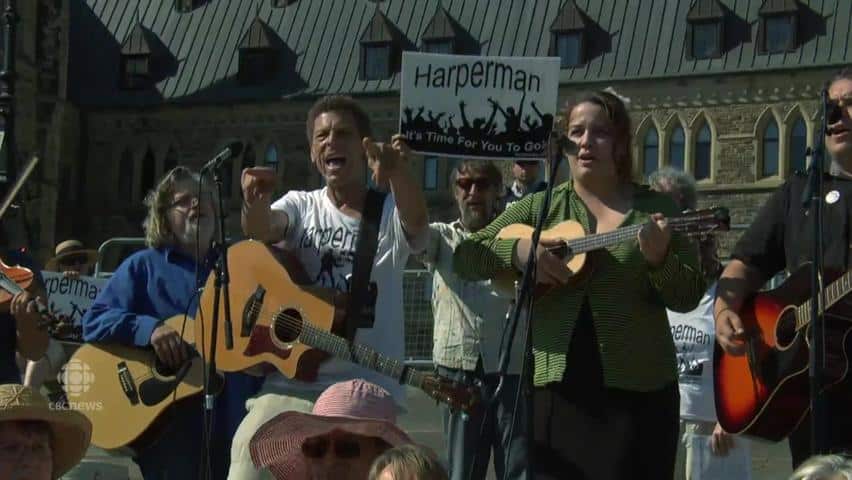 5 years ago
2:42
Clive Doucet says "Harperman" songwriter Tony Turner is still on leave as a scientist with Environment Canada and that their video has more than 2 million views online. 2:42

The protest song that began in a church basement moved to the lawn of Parliament Hill today.

Hundreds of people showed up to sing Harperman, which was written by Tony Turner, a migratory bird specialist who works at Environment Canada.

Turner is under investigation at work for making and posting a video performance of the song. At issue is whether Turner violated the code of ethics that all public servants must adhere to — one that mandates they be impartial and non-partisan.

Until the investigation at work is finished, Turner cannot go into the office or associate with people who helped create the YouTube video, said his wife, Sharon Reeves

But she said it was heartwarming to see a crowd show up to sing her husband's protest song.

"Every word in it is true. He didn't make it up. He took it from previously written documents and press and media reports, and I think it resonates with Canadians who are looking for change," Reeves said.

The song, which Reeves describes as a "toe-tapping, fast-moving, ear-catching, cool-rhyming, smile-inducing" tune, had just 45,000 views before Turner was suspended. Afterward, she said, that number jumped to two million hits.

Chris White, a singer-songwriter in Ottawa, and one of the organizers of the Ottawa Folk Fest, put the singalong together. He's not surprised the song is catching on with the public across the country.

"I actually think it's the happy hopeful vibe. We've been getting a steady stream of doom and gloom and fearmongering for a long time now," White said.

He believes the song will make a difference on election day.

"I met Pete Seeger several times. This is all reminiscent of songs changing the world. Even the fact that this happened, is unbelievable. So what happens next? I'm not going to put any limits on it," White said.

Turner's union, the Canadian Association of Professional Employees, encouraged its members to attend the singalong to show their support for Turner and his right to free speech.

"It's an ideal opportunity to remind the government that public servants are Canadians too and have a right to express their opinions," reads a statement on its website.

The union said members could use a few hours of their annual leave to take the afternoon off to head down to the protest singalong.

But the union encouraged its members to be discreet at the event to avoid repercussions at work. "Don't wear anything that might identify you as a public servant. Put your name tag or ID card away in your pocket or purse," the statement warns.

The members were told to avoid identifying themselves to journalists as a public servant. "Tell them you are a concerned citizen who wants to participate in an activity that celebrates Canadians' right to free speech.

"There is no need to say that you are a public service employee."

Despite the headache the Harperman song has caused for Turner, Reeves said she has no regrets.

"I'm proud of him. I think it was a song that was meant to be written. I don't think he ever anticipated it would come to this, but it speaks truth to power and I think it's a really good song.