A Chinese market meltdown that caused global stocks to slide on Monday also touched off a flurry of finger-pointing and back-patting among party leaders on Canada's federal election campaign trail. 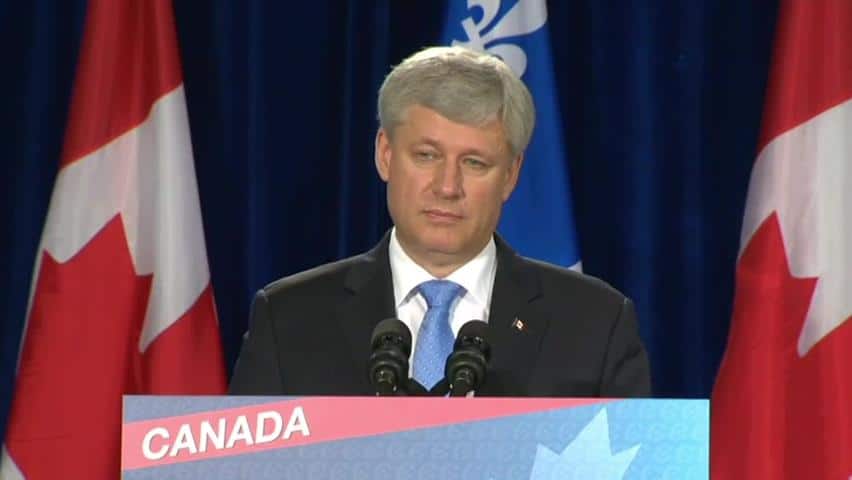 A Chinese market meltdown that caused global stocks to slide on Monday also touched off a flurry of finger-pointing and back-patting among party leaders on Canada's federal election campaign trail.

The gloomy economic news also spurred a conversation between Conservative Leader Stephen Harper and the Governor of the Bank of Canada Stephen Poloz on ongoing developments. While it's common for the prime minister and the Bank's governor to speak about the economy, it doesn't happen often during an election campaign.

While the Conservative leader pressed his party's fiscal record and warned that his opponents pose a "major risk" to Canada's economy, NDP Leader Tom Mulcair and Liberal Leader Justin Trudeau blamed the Tory government for failing to cushion the country from an external blow.

A statement from the Prime Minister's Office sent to reporters shortly before markets closed said Harper and Poloz discussed the decline in stock markets and commodity prices, slowing growth in China and emerging markets and the potential impacts on Canada's economy.

A senior campaign official told CBC News acknowledged it is unusual for the two to talk during a campaign but that it "reflects the seriousness of the situation."

A spokeswoman for the Bank of Canada confirmed Poloz's call with Harper on Monday but did not disclose details of the conversation. Louise Egan told CBC News the Bank "continues to monitor market developments closely, as it always does."

"Having these discussions on important economic issues is one of his responsibilities as head of the central bank,"  Egan said. "He [Poloz] does so on a regular basis."

News of the conversation came as the state of the economy dominated Monday's campaign events — with Harper taking more questions about the fiscal outlook than the Mike Duffy trial for the first time in weeks.

Harper spent Monday outlining the Conservative economic record, including tax breaks for business and families, free trade agreements signed with 39 countries, and an infrastructure program he described as the longest and largest in the country's history.

"Do we in Canada really want to go down the NDP-Liberal road of out of control spending, permanent deficits and higher taxes?" Harper told a crowd of about a hundred supporters at a Monday evening event in Lac Beauport, Que.

"I think we want to stay the Conservative course that has, in a troubled global economy, consistently made this country an island of stability."

'A more precarious situation for all Canadians'

Meanwhile, Mulcair accused Harper of leaving the economy vulnerable by relying too heavily on the oil sector and ignoring the manufacturing sector at the expense of 400,000 jobs.

Mulcair, speaking at a Monday evening event in Mississauga, mocked Harper for "suddenly" and "urgently" calling Poloz during the campaign after claiming for months the economy was "A-OK and there's nothing to worry about."

"Well, Mr. Harper, you may have been blind to it, but Canadians have known for some time that your plan just isn't working," he said.

The NDP leader said he would deliver a fully-costed platform, including one high-priced promise to deliver a child-care program that would add a million new spots.

"Don't forget that the reason we're in such a precarious situation in Canada right now is because Stephen Harper made a huge bet on one number — oil and gas," Mulcair said during a campaign stop earlier in the day in Toronto. "And when that number didn't come in, guess what? We were left with a more precarious situation for all Canadians."

Trudeau, speaking Monday evening in Peterborough, Ont., said Harper's plan has failed to create growth because it focuses on breaks for the wealthiest Canadians.

"Canadians are sitting around their kitchen tables today and are understandably worried about their investments and their retirement savings, given the news across the markets. But meanwhile Conservatives are scrambling to take political advantage of it and point fingers," Trudeau said.

The Liberal plan, he said, would focus on tax breaks and child care benefits for the middle-class.

The TSX started off down about 750 points before clawing its way to only be down about 100 points around midday. But by the time markets closed, the gloom had returned and Canada's benchmark stock index was back down 420 points. Every subindex was lower as the TSX closed at 13,052.

China's main index sank 8.5 per cent — the biggest drop since the early days of the global financial crisis — with deepening fears the world's second-largest economy is slowing down.

With files from Susan Lunn and Tom Parry