Elizabeth May lays out plan to end homelessness

Calling substandard housing for First Nations a "scandal," Green Party Leader Elizabeth May announced a plan to create a national housing strategy that would take concrete steps for senior, low-income and indigenous Canadians. 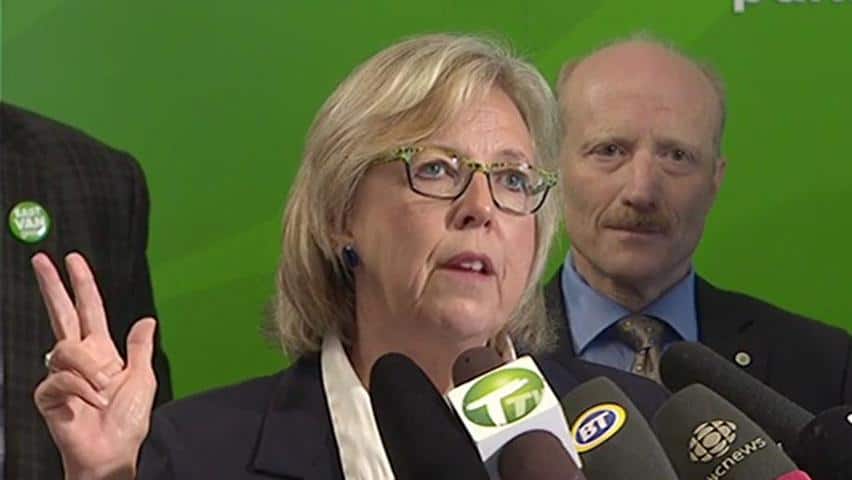 Elizabeth May on the Green Party's housing plan

5 years agoVideo
1:12
Green Party leader Elizabeth May lays out her party's housing strategy at a campaign event in Burnaby, BC. 1:12

Canada could end homelessness and become a world leader in energy efficiency through a national strategy, says Green Party Leader Elizabeth May.

Calling the shortage of housing for First Nations, Métis and Inuit a national "ongoing scandal," May announced a three-pronged national housing strategy that would also aim to ensure seniors and low-income Canadians have a place to call home.

"It is no longer acceptable for Canadians, that any of us, should live without adequate housing. Housing is a human right, and in Canada as a wealthy country, we simply have no more excuses for our failure to ensure housing, May said during a campaign stop in Burnaby, B.C.

May said the Conservative government has rolled out the red carpet for wealthy foreign investors, who have gobbled up properties and created a dire shortage of affordable housing for Canadians. The problem is most critical in B.C.'s lower mainland.

"This is something we can stop without offending any trade deals or any provincial rules," she said.

Some highlights of the Green housing strategy:

The Green Party housing plan also commits to improving substandard housing for First Nations and wants a "guaranteed liveable income" to replace federal transfers for social assistance, disability supports and other benefits for children and the elderly. According to the party's platform documents, the principle is to establish an "income floor" below which no Canadian could fall, but with incentives for recipients to continue working and earn more.

Fran Hunt-Jinnouchi, former First Nations chief and Green candidate for the B.C. riding of Cowichan—Malahat—Langford, said housing is the most critical issue for aboriginal Canadians. The guaranteed income would help those now forced to "couch-surf" or live on the streets, she said.

"Really the issue here is poverty, and that's the first step that we have to address," she said.

Taking questions from reporters after the announcement, May blamed Conservative policies favouring the oilsands for the current economic uncertainty.

"All policies, whether environmental, or social, or you name it, have been sacrificed to getting as much unprocessed bitumen out of Canada to be refined in as many other countries as possible," she said. "This is a strategy based on high-volume exports of a low-value product. It means for every barrel of bitumen we want to ship offshore, we're shipping off jobs with it."

Small deficit 'not a big deal'

She said bringing in austerity measures to eliminate a small deficit is "shameful and bad economics" if the country is teetering near a recession. A $1-2 billion deficit in a $2-3-trillion economy is "not a big deal."

"Running deficits to ensure we stay healthy as an economy is sensible," she said.

May also predicted there will be a minority government in the next Parliament, and urged Canadians to elect Green MPs who will work collaboratively and productively to influence social and environmental policy.