Canada's more aggressive role in the world not gone unnoticed

Canadian voters tend not to pay much attention to foreign policy. But after 10 years of Conservative government they have probably noticed that Canada's role in the world has changed, Derek Stoffel writes.

In the camps for Syrian refugees, Canada is an ideal destination for those who have escaped the horrors of war.

"I think Canada is a great country," said Amar Aldoura, who fled Damascus nearly two months ago with his wife and baby boy. They stayed for a few weeks in a refugee camp along the Syrian-Turkish border before heading to Istanbul.

Aldoura is pondering his next move. Europe is a more likely destination for the English teacher and his family. But he says he's heard Canada and its government have changed their attitude somewhat.

"I think Canada now is less welcoming to people like me," he told CBC News.

Foreign policy rarely figures much in Canadian elections, which usually focus on domestic issues. But the campaign this year was upended by the refugee crisis in Europe and Canada's response to it.

Since their election in 2006, Stephen Harper and his Conservative party have dramatically reshaped Canadian foreign policy.

Gone seems to be the idea that Canada, as an honest broker, can use its so-called "soft power" to influence friends and help solve global conflicts.

Instead, Harper has chosen what appears to be a more aggressive foreign policy that has largely sidelined international institutions such as the UN.

The government has also promoted a stronger, better equipped military, and has had no qualms about sending Canadian forces into combat.

Canadian warplanes took part in the airstrikes to protect civilians in Libya in 2011. Fighter jets and support planes from the Royal Canadian Air Force continue to fly missions in the U.S.-led effort to defeat ISIS in Syria and Iraq. Canadian special forces troops are training Kurdish soldiers in northern Iraq.

This new direction in foreign policy has changed how Canada is viewed around the world, most notably, perhaps, in the Middle East.

In Israel, Harper is hailed as one the best friends to the Jewish state and its prime minister, Benjamin Netanyahu. In 2014, he was given a welcome there rarely seen by visiting leaders. 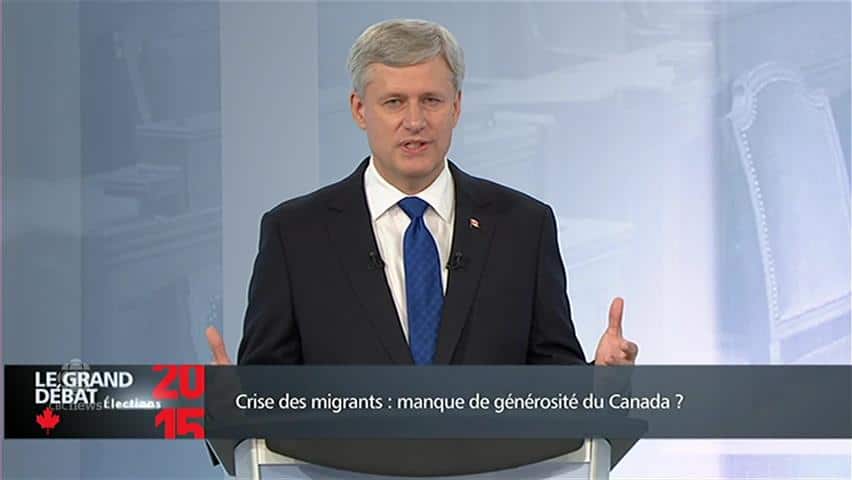 5 years ago
2:08
Stephen Harper defends his record as Tom Mulcair and Justin Trudeau accuse his government of inaction on the Syrian refugee crisis 2:08

But in the Arab world, the unwavering, unapologetic support of Israel has disappointed governments and citizens alike who think Canada has chosen sides.

"I think that Canada was neutral, and they were willing to help the Third World. But unfortunately now, there is no indication to say Canada is helping the Syrians," says Nahal Ghadri, a Syrian who now works with an aid agency assisting the millions of Syrians displaced by the war.

Former Liberal prime minister Jean Chrétien kept Canada out of the 2003 war in Iraq, but he did commit the Canadian Forces to a long and costly conflict in Afghanistan.

And it was during this period that Canada's military focus shifted from UN peacekeeping missions to a more assertive, combat-ready force.

Soldiers traded in their blue berets for the sand-coloured camouflage of desert warfare.

What to do with Syria

The Conservatives would stay the current course.

Indeed, Harper defended Canada's role in the anti-ISIS mission even as the refugee crisis in Europe began to dominate the campaign.

"The scale of the humanitarian crisis in Iraq and Syria cannot be solved, cannot even come close to being solved, by refugee policy alone," the Conservative leader said.

Putting aside the issue of refugees and how much Canada is prepared to do to help, foreign policy has not been a huge factor so far in the election campaign.

But so far, at least, there has been little discussion of how to actually end the tide of refugees from Syria, by ending the long-running war in that country. And no one is talking about the dormant peace process between Israel and the Palestinians.

Canada sat on the sidelines this past summer as six world powers, led by the U.S., negotiated an agreement with Iran to limit its nuclear program.

The Harper government shut Canada's embassy in Iran and expelled Iranian diplomats in Ottawa in 2013, citing security reasons, leaving Canada as one of the very few countries without diplomatic ties to Tehran now that the British recently reopened their mission.

Canadians may not walk into the ballot box with global issues on their minds, but the outcome of the vote could determine whether Canada will continue its aggressive foreign policy, or perhaps take a new direction.