Conservative Leader Stephen Harper says the Liberal plan to exclude the F-35 from the bidding process to replace Canada's aging fleet of CF-18s would "crater" the aerospace industry. Would it?

Leaders engage in war of words over fighter jets 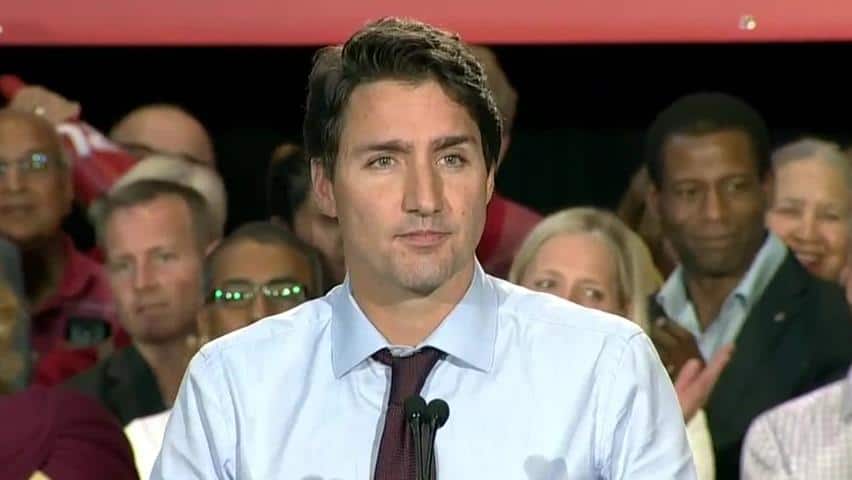 Trudeau: F-35 jets would be a 'nightmare' for taxpayers

"He's not giving shipbuilding anything; he's merely talking about cratering our aerospace industry, which is, as I say, bad policy.... I don't understand where they're going with this." — Conservative Leader Stephen Harper on Liberal Leader Justin Trudeau's promise to scrap the F-35 stealth fighter program and channel the savings into naval shipbuilding.

One of the cornerstones of the Liberal defence policy is to formally opt out of the Conservative government's plan to acquire 65 F-35 stealth fighter jets to replace the Air Force's aging fleet of 1980s vintage CF-18s.

A Liberal government would hold an open competition among the lower-cost competitors, Trudeau has said, noting that there would be no penalty for withdrawing from the F-35 project. Harper said Monday that would "crater" the aerospace industry, particularly in Trudeau's backyard of Montreal.

Spoiler alert: The Canadian Press Baloney Meter is a dispassionate examination of political statements culminating in a ranking of accuracy on a scale of "no baloney" to "full of baloney" (complete methodology below).

This one earns a rating of a lot of baloney. Here's why.

In the summer of 2010, the Conservative government signalled its intention to buy the F-35, but did not sign a purchase contract at the time.

Scathing reports from both the auditor general and the parliamentary budget office accused National Defence and Public Works of lowballing the enormous cost of the program and of not doing enough homework on alternatives.

Consequently, the program was put on hold and the Conservatives elected to extend the life of the CF-18s until 2025, forcing the final decision on a future government.

The Lockheed Martin-built F-35 — at US $382 billion — is the most costly weapons program in U.S. military history, one plagued with delays and technical bugs, many of which are related to the development of the fighter's software.

But it is also one of the most sophisticated military/industrial complex programs in history, where partner nations help Washington finance the development of the aircraft in return for not only a favourable purchase price, but access to sub-contracts for each nation's aerospace companies.

As of December 2014, 33 Canadian companies have won US $637 million in contracts for both F-35 production and sustainment, according to industrial participation tabled in Parliament by Industry Canada. The same document estimates that over the 40-year lifespan of the aircraft, aerospace firms in this country could receive a total of $10.17 billion.

Since there is no signed agreement, Canada would not face contract penalties for withdrawal — but the aerospace industry would likely fall out of favour, a senior Lockheed Martin executive warned.

"If, in fact, the Canadian government were to decide not to select the F-35, we will certainly honour the contracts that we have here with the Canadian industry, but our approach in the future would be to try to do business with the industries that are in the countries that are buying the airplane," Orlando Carvalho, executive vice-president of aeronautics at Lockheed Martin, said in a 2013 speech in Montreal.

Data from the Aerospace Industries Association of Canada shows there are more than 700 companies of all sizes from coast to coast, employing of more than 180,000 workers, and with net revenue in 2014 of $27.7 billion.

Based upon current figures, the F-35 represents approximately 2.29 per cent of the industry's total revenue.

Almost three-quarters of the industry is dedicated to manufacturing, while the rest does repair and overhaul. The majority of the growth in the next six years is expected to be in the commercial aircraft market.

What the experts say

Elinor Sloan, a professor of international relations at Carleton University and former senior analyst at National Defence, says choosing another aircraft wouldn't be the end of the world.

"Obviously if we didn't buy that aircraft we wouldn't get those benefits, but that's not to say we wouldn't get benefits from purchasing a different American aircraft," said Sloan, who noted the F-35 is different from traditional procurements, which obliged defence contractors to spend the equivalent of the equipment purchase price in Canada.

"A lot of the (F-35) benefits, of course, are projected. There are projections as to the number of jobs are going to be created. We won't know it until it happens."

Going with another aircraft could in fact provide more certainty to the aerospace industry because under a traditional benefits arrangement, the spending would be guaranteed, said defence analyst Dave Perry of the Canadian Global Affairs Institute.

What Canada would lose by dropping out of the F-35 program would be access to the cutting-edge technology and know-how that's going into the jet, he said.

It's specious of Harper to claim disaster would follow a withdrawal decision, since the Conservative government itself left the door open to leaving, Perry added.

"We have made no decision and made no progress on making a decision in the last year-and-a-half. The government has been very diligent and very consistent in saying it is reviewing all options."

Adding to the uncertainty, there has also been significant concern in the Canadian aerospace industry that much of the sustainment work on the F-35 would be conducted in the U.S., he said.

But there is also the potential for those losses to be mitigated — or even erased. For that reason, Harper's claim earns the rating of "a lot of baloney."

The Baloney Meter is a project of The Canadian Press that examines the level of accuracy in statements made by politicians. Each claim is researched and assigned a rating based on the following scale:

No baloney — the statement is completely accurate

Full of baloney — the statement is completely inaccurate