Pollsters say one of the curious things about Quebec voters is this apparent contradiction: They are at once conservative and progressive. The CBC's Nancy Wood visits the St-Tite festival to learn more about voting intentions on the ground.

At once conservative and progressive — Quebec voters are an apparent contradiction

I spent a day in St-Tite recently, to get a feeling for how Quebecers outside Montreal might be planning to vote.

The St-Tite Western Festival is a big deal in Quebec. It lasts 10 days and during that time, more than half a million people come to town. There's country music, line dancing and a saloon run by the government liquor board.

Cowboys ride down the main street and there's a world-class rodeo, second only in Canada to the Calgary Stampede.

St-Tite is located in the Mauricie region — not far from Jean Chrétien's hometown of Shawinigan. But people come from far and wide for the festival. I figured if I wanted to know how a broad swathe of Quebecers felt about politicians, this was a pretty good place.

Before I left Montreal, I met with Christian Bourque, a pollster from Leger360. He told me one of the curious things about Quebec voters is this apparent contradiction: They are at once conservative and progressive.

"Based on all the polling that we do, at least a quarter if not up to a third of Quebecers could be considered right of centre," said Bourque.

"They are fiscal conservatives. However, they do not vote conservative on the federal stage, because they do not like something about that brand of conservatism that's brought to them by what they identify as a Western Canadian style."

Bourque points out that at the provincial level, the right-wing Coalition Avenir Quebec got more than 25 per cent of the vote in 2013. Right now, though, the federal Conservatives are polling at about 14 per cent.

They have the highest level of unmarried couples and children born outside of marriage in Canada. They support same-sex marriage and gay rights. They are firmly attached to subsidized daycare and the freedom it gives women to return to the workforce. The gun control movement got its start here, after the 1989 Polytechnique shooting.

In St-Tite, I wondered about how this clash of ideas would translate into voting intention. Would people here dislike the idea of conservatism imposed by Western Canada?

I watched as spectators doffed their cowboy hats for the Canadian anthem and the flag riders galloped around the rodeo arena with the Maple Leaf and the Fleur-de-lis. Everywhere I looked, people were wearing cowboy hats and boots.

On the streets, many told me they had nothing against the Conservatives. 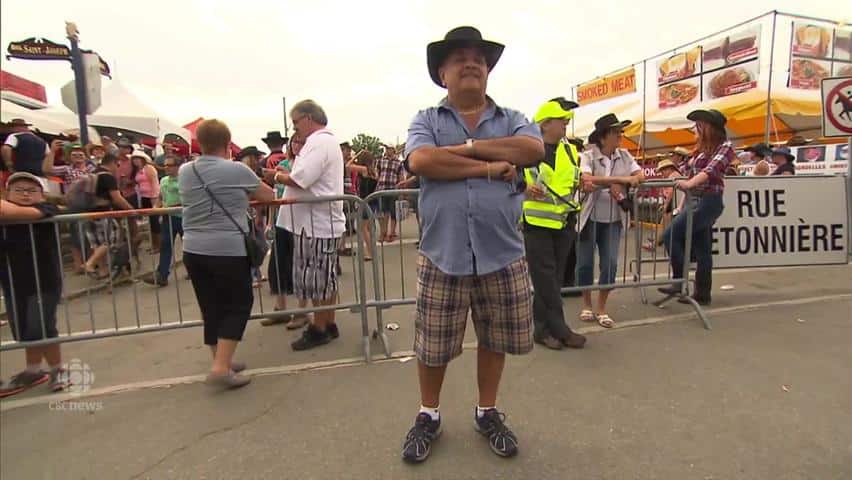 5 years agoVideo
2:50
Quebecers from far and wide gather at the Festival Western de St-Tite. CBC News hits the ground to learn more about the voting intentions of a people who appear to be both conservative and progressive. 2:50

"I've got nothing against Harper," said Marcel Falardeau, "except for the fact that he sent our soldiers to war. That, I did not like." Falardeau said he's undecided, torn between the Conservatives and the NDP.

Still, voters like Sarah Pelletier reflect what pollsters are seeing.

She said she's uncomfortable with Harper's social policies. "He's way too conservative for me, too churchy," she said. "I think he's been there long enough."

Thus the allure of the New Democrats; although many I spoke to had a hard time remembering the leader's name. Tom Mulcair is a Quebecer who served as a Liberal member of the National Assembly from 1994 to 2007.

But he is less well-known than his predecessor Jack Layton, who died just months after his party swept most of Quebec's 75 seats in 2011.

"Quebecers seem to trust the NDP," said first-time voter Alex Métivier, 18, "but I don't know if it's because we felt bad for Jack Layton and what was happening to him so that now we feel a connection to Tom Mulcair, or whether it's really his ideas that people like."

"I think I like Mulcair," said Nancy Ramesay. "Not because of anything he says just because my gut tells me he's the one."

With about three weeks left in the campaign, Quebecers still have one more French-language debate (TVA, Friday, Sept. 25) to decide if those impressions are founded — and which way they'll cast their ballots.