Recreational drone users in Canada face new restrictions on where and when they can fly their remote-controlled devices, under new rules being announced today by Transportation Minister Marc Garneau.

Recreational drone users in Canada face new restrictions on where and when they can fly their remote-controlled devices, under new rules being announced today by Transportation Minister Marc Garneau.

The rules, which are effective immediately, mean recreational users will face a fine of up to $3,000 if drones weighing more than 250 grams are caught flying:

Some of those rules existed only as guidelines before the announcement, Garneau said, with no specific penalties for breaking them.

RCMP Chief Supt. Brian Stubbs said at the announcement at Toronto's downtown Billy Bishop Airport that police could really only penalize someone using a drone dangerously if they broke a section of the Criminal Code, such as criminal negligence or mischief.

"These regulations will give us a [less harsh] way to manage these types of calls," he said.

"Of course discretion is a part of this as well too. Police officers have the discretion just to educate, perhaps, an operator of a drone, all the way to [using] the Criminal Code."

Transport Canada says anyone who sees someone flying a drone illegally should call 911.

The new rules do not apply to people flying at sites and events sanctioned by the Model Aeronautics Association of Canada, a national model aircraft association Garneau said has an excellent safety record.

Garneau pointed out that people who use drones for commercial, academic or research reasons already have to get a special certificate, and most fly them safely.

But he added that Transport Canada has noticed a large increase in the number of reported safety incidents involving drones in the last three years: 41 in 2014, 85 in 2015 and 148 last year.

"I believe that we have to strike the right balance between encouraging the drone industry, but doing it responsibly," he said. 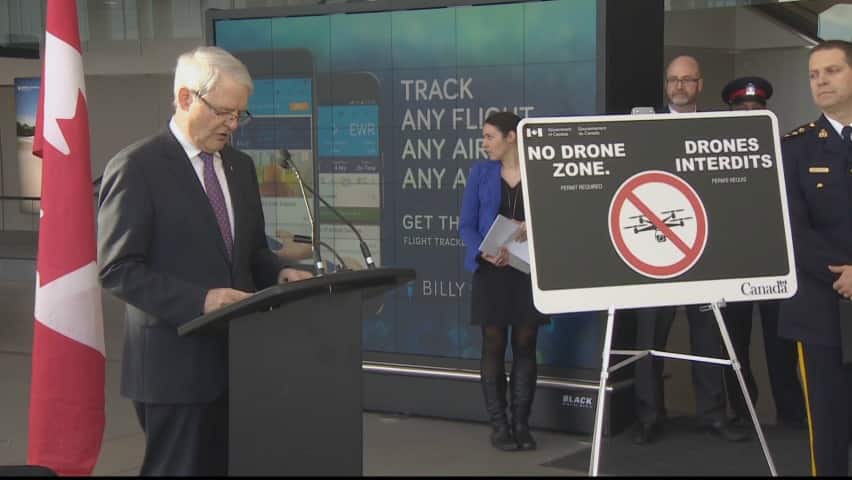 4 years agoVideo
2:38
Transport Minister Marc Garneau describes a number of interim measures for drone operations in Canada, describing the possibility of a crash between a drone and an airplane as a 'nightmare scenario'. 2:38

He said an overhaul of Canada's regulations for all unmanned aircraft is coming in June, but there's an urgent need to do something now on an interim basis.

"When it comes to safety, I don't think anything is overkill," said Garneau in response to a reporter's question.

"I have read almost on a daily basis reports from pilots coming into airports, on the flight path, and reporting seeing a drone off the wing."

In a statement, the Ottawa International Airport Authority called this a "necessary and welcome move."

"As drones grow in popularity, we need to work closely together to ensure that our skies remain safe for aviation activity while keeping communities safe from collateral harm," said Mark Laroche, the airport authority's president and CEO.

Others wondered where drone users in cities would have left to fly.

"There are places where drones can be used, I would encourage people to contact the Model [Aeronautics] Association of Canada or to find an area that is more remote," Garneau said.

"We've had too many incidents of drones landing near people, landing on cars and they pose a hazard. If they're over 250 grams they can cause serious damage, including killing people."