Canada's trade war with the U.S. "is as difficult a moment as we have ever faced as a country," former Ontario premier Bob Rae wrote this week. So, uh, Happy Canada Day.

'It is as difficult a moment as we have ever faced as a country,' says Bob Rae

"It is as difficult a moment as we have ever faced as a country," Bob Rae wrote last week.

The former NDP premier of Ontario and federal Liberal leader is referring here, of course, to Donald Trump. And the trade wars, tantrums and global instability the American president entails.

It is because of Trump that Canada's birthday will be rung in this weekend with a round of retaliatory tariffs, raising prices on goods like American licorice, handkerchiefs and mattresses.

It is because of Trump that everything seems that much more tenuous.

Historians might note that Canada has had its share of difficult moments before now. Two world wars, the Great Depression, the Conscription Crisis, the October Crisis, Oka, two Quebec referendums. And whether this moment is any more or less trying is perhaps worthy of debate.

But this is not a passing trifle.

It is a measure of the current tension that significant intrigue has surrounded Stephen Harper's decision to meet with White House officials next week without notifying Prime Minister Justin Trudeau's office, as if he had been caught cavorting with the administration of a hostile state.

While announcing Canada's summer offensive on Friday, Foreign Affairs Minister Chrystia Freeland was diplomatic on the question of Harper's choice of meetings.

"He is a person we all need to respect as the former prime minister of Canada. The remarks he made on Fox News recently, I think were helpful. And we wish him well in all his endeavours," she said, standing in a steel factory in Hamilton, Ont.

She was only slightly less diplomatic in explaining what the Trudeau government was about to do to the price of American exports to Canada. 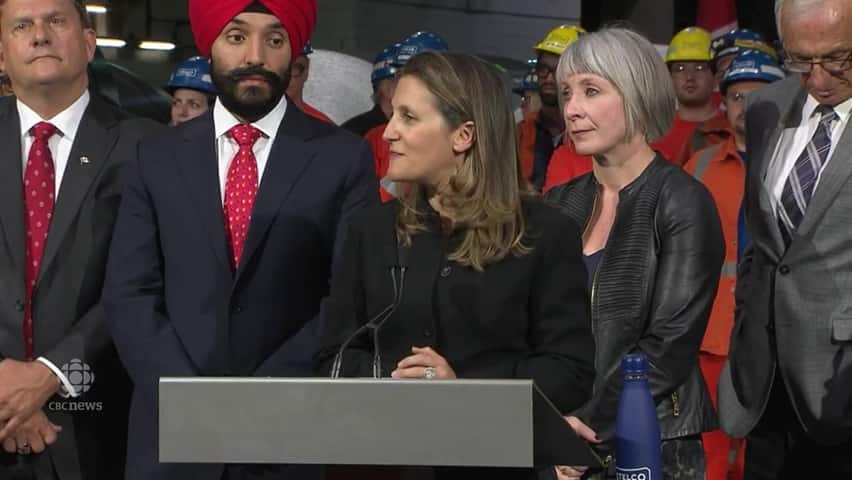 3 years ago
0:41
Foreign Affairs Minister Chrystia Freeland tells reporters in Hamilton that Canada's reponse to US tariffs is firm and measured 0:41

Flanked by people in hard hats, Freeland described the American tariffs that started the dispute as "illegal" and "unjust" and "absurd" and "hurtful." The Canadian reaction, she said, would be "perfectly reciprocal."

"I cannot emphasize enough the regret with which we take these countermeasures," Freeland said. "We are acting very much in sorrow than in anger."

Of course, the Canadian public could be moved to anger if this situation drags on.

Was she worried, Freeland was asked, about the possibility of further American action in response to the Canadian retaliation?

"As I said, the day before our NAFTA negotiations began, we expected that there would be moments of drama," she said. "And I think that prediction has been borne out." 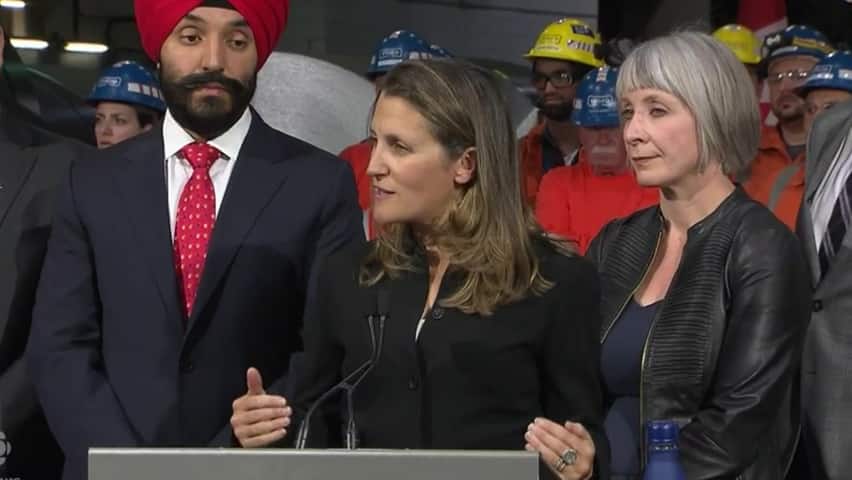 Freeland 'There will be moments of drama in the future'

3 years ago
1:16
Foreign Affairs Minister Chrystia Freeland tells reporters in Hamilton that Canada's reponse to US tariffs is firm and measured 1:16

"And I think all of us, at this point, fully anticipate there will be some moments of drama in the future," Freeland said.

A few hours passed without a presidential tweet in response, which at least made for a relatively calm Friday afternoon.

Freeland continues to speak with the American trade ambassador, she reminded everyone. And the Mexican presidential election is today. The Canadians anticipate NAFTA discussions will enter "a renewed, intensive phase" soon thereafter.

U.S. Republicans have shown little to no interest in constraining Trump to this point, but the combination of punitive tariffs and midterm elections might put new pressure on Trump to end this fight and move on, even if only to reduce the likelihood that he will face a Democrat-controlled Congress for the next two years.

"I am absolutely confident that common sense will prevail," Freeland said. "I am an economic determinist and I think economic reality is a very powerful thing. And the economic reality is our relationship with the United States is balanced and mutually beneficial."

So it's possible this trade war is over by the fall.

But that wouldn't allow Canadians to stop thinking about Trump.

The ramifications of Trump

Chances are, people fleeing U.S. immigration policy will continue showing up at the Canadian border. And the tumult of the G7 Summit in Charlevoix, Que., could be a preview of every major international gathering for the foreseeable future. Trump might drop tariffs on Canadian products, but continue his trade wars with Europe and China.

In any number of ways, the spectre and ramifications of Trump could continue to frame Canadian politics.

In unofficially launching his party's re-election campaign this week, Trudeau mentioned neither Trump nor the trade war, but the subtext was clear.

"We've seen it, around the world, the politics of division, of polarization, of populism, are taking more and more hold," Trudeau said at a rally in Mississauga, Ont. "And we have to demonstrate, here in Canada, for ourselves, for our communities, for our kids, but also for the world, that those don't always work."

At a news conference in Ottawa on Friday, Conservative finance critic Pierre Poilievre segued from a condemnation of American trade policy to a wide-ranging argument against Liberal domestic policy.

"Unfortunately, Justin Trudeau enters this trade war in a position of weakness," he said, criticizing the government's decision to run budget deficits, lamenting a lack of foreign investment and calling on the Liberals to cut taxes.

So this Canada Day won't pass without some thought of Trump.

And we'll likely still be thinking about him at our next birthday.

It could, in fact, be a long while before this moment passes.