During a news conference in Toronto Tuesday, Freeland was asked how she intended to build on early progress on the cases of Michael Kovrig and Michael Spavor, who have been held by Chinese authorities without charge since December 2018. Freeland said last week she raised the cases in a bilateral meeting with Chinese Foreign Minister Wang Yi on the sidelines of a foreign ministers' meeting in Bangkok and the pair committed to "continued discussions."

"It was a positive step that I was able to have a face-to-face meeting with my Chinese counterpart, and we both committed to keep the lines of communication open. But I do want to emphasize for Canadians that the situation continues to be challenging, and we're just going to keep working at it," she said after meeting with her U.K. counterpart, Dominic Raab.

Kovrig and Spavor were detained on alleged national security offences, not long after Canada arrested Huawei executive Meng Wanzhou at the request of the U.S.

Prime Minister Justin Trudeau has maintained the detentions are "arbitrary" and that Meng's case will be dealt with by the rule of law.

Global Affairs confirmed Monday that consular officials in China met with Kovrig for the 10th time, but could not provide details on the visit due to privacy provisions. 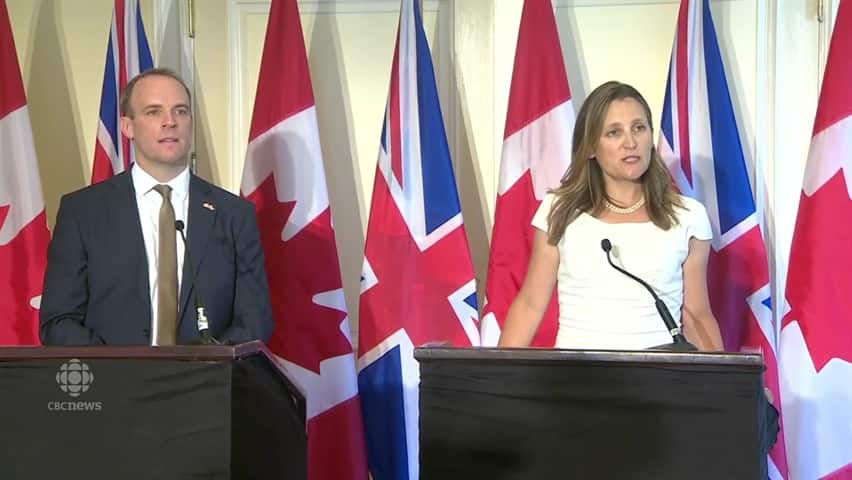 2 years ago
1:07
Canada's Minister of Foreign Affairs says relationship with China "continues to be challenging" during a press conference following a bilateral meeting with Dominic Raab, UK's Secretary of State for Foreign and Commonwealth Affairs. 1:07

Freeland, who met with Raab Tuesday to discuss trade, human rights and climate change, thanked her counterpart for his government's support on the file.

"We are very grateful to you and to the U.K. for your very strong and public stand on this difficult issue," she said.

The two ministers also discussed the ongoing crises in Hong Kong, Crimea and Venezuela. Asked if Canada would follow the U.S. in imposing sweeping new sanctions against the regime of Venezuela's socialist leader Nicolás Maduro, Freeland said only that the government is "looking at them closely."

"We do have a very strong set of sanctions currently in place against the leaders of the Maduro regime," she said.

An executive order signed by U.S. President Donald Trump Monday freezes Venezuelan assets in the United States and immediately bars all business with the government of Venezuela.