Bryan Adams to MPs: Give artists more control over their work

Canadian singer-songwriter Bryan Adams wants the federal government to amend the Copyright Act to give artists more ability to regain control of their scripts and songs after they've been sold to a company.

Canadian singer-songwriter Bryan Adams wants the federal government to amend the Copyright Act to give artists more ability to regain control of their scripts and songs after they've been sold to a company.

Appearing at the House of Commons heritage committee this morning, the veteran rocker pitched a proposal that he said would require a change to only one word in the law, but would make a huge difference to artists.

Right now, the act gives companies which have the rights to work by musicians, authors, composers and other creators the power to retain those rights for 25 years after the artist's death. Adams called for a change to the act that would limit those companies to exclusive rights for 25 years after the initial sale of the rights — more than enough time, he said, for labels to commercially exploit artists.

"This would be a very big step in the right direction, to help composers and authors in Canada to own and control their work," he said.

The U.S. allows companies to retain rights to artists' work for 35 years after their sale.

"I think we can do better in Canada," said the 58-year-old Adams.

Adams said his pitch is the "simplest change" Parliament could make to improve the livelihood of artists, but added he recognizes that's just one aspect of a bigger challenge in the global digital era.

Adams became a star in Canada and the U.S. with his 1983 album Cuts Like a Knife and earned international recognition for his album Reckless the following year, which included the hits Run to You and Summer of '69.

He said the change he is proposing may benefit him personally, but he sees himself fighting for a younger generation of artists, many of them struggling to pay their rent. He thanked the Canadian public for supporting him through what he described as his "blessed career."

The committee is studying remuneration models for artists and creative industries as part of the statutory review of the Copyright Act, and is hearing from a broad range of stakeholders and experts.

Many of the members praised Adams' long and impressive career, and some recalled their favourite concert memories. Quebec MP Pierre Breton noted that Adams' career has spanned more than 40 years — 14 albums, more than 70 million copies sold — and called him "a feather in Canada's cap."

"I still say you were the best rock concert I've ever seen," he said.

Adams said that as a young artist, he was rejected by Canadian record labels. Still, he said, the regulatory regime that requires Canadian content on the airwaves helps promote artists.

"Otherwise we'd just be playing what the hits are south of the border, and we would never have recognized Canadian talent," he said.

This afternoon, the Kingston, Ont.-born Adams posted photos on Twitter and Instagram, including one of him posing in front of the National War Memorial near Parliament Hill, and used the hashtag #proudcanadian.

"Spent today in Ottawa, Canada to make the case for authors/composers and the reversion of copyrights to Canada's heritage committee," he wrote. "Also had time for a little sight seeing too. I love this town, standing in front of the war memorial, brings back so many memories of spending time here as a youngster."

Heritage Minister Pablo Rodriguez said he is "super happy" that artists like Adams are sharing their perspectives with the committee, but would not comment on the specifics of the musician's proposal.

"What's important for us at the end of the day is that artists, the creators, are paid for the work they do," he said. "This is a way of life, it's the way they live. It's important that they be paid for that." 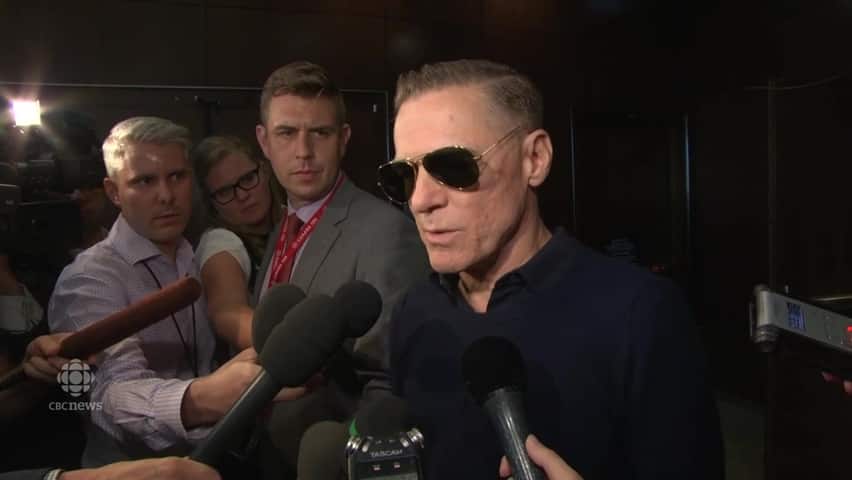 2 years ago
1:17
Legendary Rocker Bryan Adams was a witness at the Commons Heritage committee on Tuesday 1:17
CBC's Journalistic Standards and Practices|About CBC News