The federal government will no longer be able to advertise policy measures that have not yet been adopted by Parliament under new rules designed to curb partisanship in taxpayer funded ads.

7 years ago
Duration 1:33
Treasury Board President Scott Brison says he is following up on an election promise

New measures to scrub self-serving and partisan government communications will take effect immediately, says Treasury Board President Scott Brison — but that doesn't mean the Liberals will put the brakes on federal ad spending.

The new "interim" safeguards include banning all government ads within three months of a fixed election date and barring the government from advertising policies that have not yet been passed by Parliament.

"For the very first time we are defining non-partisan communications in policy to avoid any potential confusion, misinterpretation, or abuse," Brison told a news conference Thursday, promising ads that are "objective, factual and represent a legitimate public service announcement."

"We just want to make it absolutely clear that we are ending the ability for any government, current or future, to use tax dollars to fund what are partisan or quasi-partisan ads."

The former Conservative government earned years of criticism for its aggressive Tory-blue branding that melded party and policy, sloganeering and persuasion, in one seamless, whole-of-government campaign under the "Economic Action Plan" motif. The ubiquitous EAP signage still dots the country.

Those Conservatives came to office in 2006 riding public anger over the Liberal sponsorship scandal, an advertising scandal that resulted in criminal convictions and a public inquiry.

The new government policy covers everything from the federal identity program (no more "Harper Government" in official communications) to public opinion research and barring party-hued colour schemes and the images, voices or names of MPs or senators in ads.

The 2015 Liberal election platform promised to create an advertising commissioner, housed in the federal auditor general's office, to review all government ads, but Thursday's interim measures fell short of that commitment.

Instead, the government will pay $65,000 annually to have Advertising Standards Canada — the private ad industry's self-regulating body — review all government ads.

Brison said the auditor general has been asked to audit the program and that feedback will be used to draft legislation entrenching the changes at some future date.

"As with all our audits, final decisions regarding scope will be made in light of the [office of the auditor general's] mandate, the existing audit schedule, and available resources," spokesperson Ghislain Desjardins said in an email to CBC News.

Janet Feasby, vice-president of standards at Advertising Standards Canada, said in an interview they expect to handle between 50 and 60 government ads each year, in English and French.

"It'll be done by the same (three) staff that currently reviews complaints under the Canadian Code of Advertising Standards in our Toronto and Montreal office," said Feasby.

Ads will be reviewed twice — in the planning stage and again after production but before airing. If the ASC determines they breach the new standards, Treasury Board will withhold funding, said Brison.

Political advertising is not part of the ASC's mandate but it does handle increasing numbers of public complaints over government ads.

He's comfortable with the ASC's role but eventually would like to see the vetting done through an office that's accountable to parliament.

The Conservatives spent $761.5 million on government ads from 2006 through March 2015 — not including last spring's pre-election bonanza — and the Liberals are not signalling they'll shut off the taps.

"I don't want to get into the mug's game of saying what is the appropriate level (of spending)," Brison said.

"In terms of the overall dollar value, I think the most important thing is we focus on the principles that government advertising needs to actually provide public benefit." 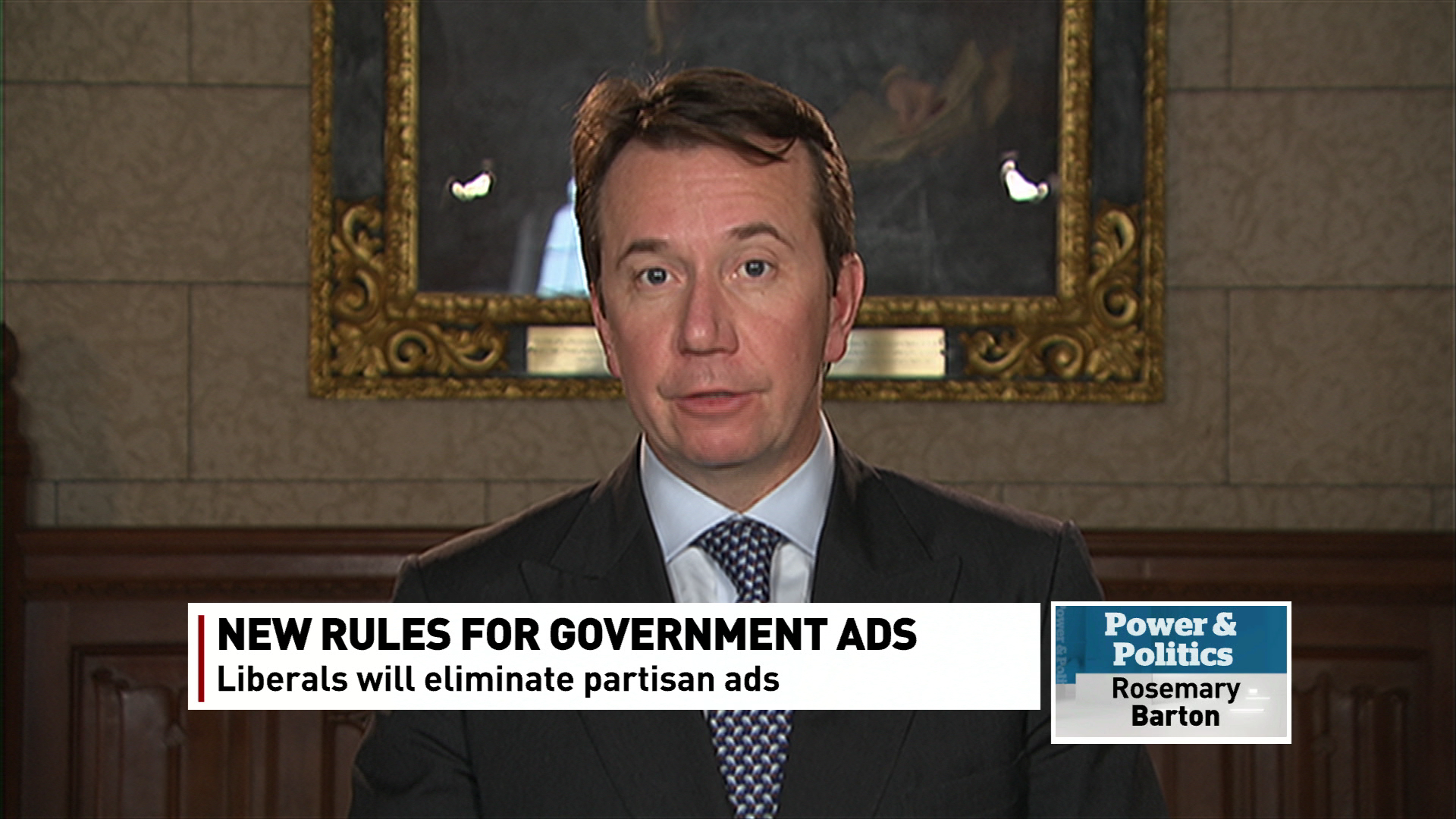 Marland said federal advertising concerns cross party lines and go straight back to the sponsorship scandal of the 1990s. In fact, Brison was part of a previous Liberal effort to clean up the ad game when, as public works minister, he delivered the 2003-04 government advertising annual report with a pledge to "ensure that Canadians get the most benefit possible from government of Canada advertising."

"It would have been nice to see (these changes) a long time ago," said Marland, the author of "Brand Command: Canadian Politics and Democracy in the Age of Message Control."

Here are the highlights of Brison's announcement Thursday: