NDP president Brian Topp has announced he is running for his party's leadership, vowing to carry on the work started by Jack Layton and to push Prime Minister Stephen Harper out of power.

'It's going to be fun,' Topp says. 'Together we will get the job done' 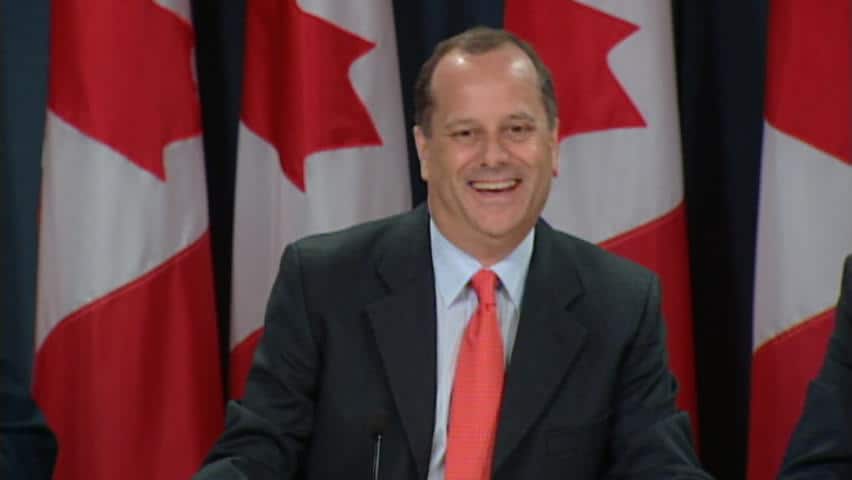 NDP president Brian Topp announced Monday he is running for his party's leadership, vowing to carry on the work started by Jack Layton and to push Prime Minister Stephen Harper out of power.

Topp made his announcement at a news conference in Ottawa with former NDP leader Ed Broadbent and Quebec NDP MP Françoise Boivin at his side.

Topp, a veteran political strategist and campaign organizer, said he has learned how to be an effective leader from Broadbent, Layton, and Roy Romanow, the former NDP premier of Saskatchewan for whom he also worked.

"I'll lead a caucus that works harmoniously and seriously as a government-in-waiting. And then we’ll win. And then we’ll govern well," Topp said. "I’ll take Stephen Harper on, I’ll expose his failed record. I’ll do it first in Parliament and then during the next election and we will elect Canada's first NDP government."

The rules for the NDP's leadership race were announced Friday by the party's federal council. Several potential candidates have expressed interest in running for the job and Topp is the first to confirm that he is entering the race. Registration for the contest opens Thursday. When Topp files his papers he will also resign as the party's president, he said.

He also committed to running for a seat in the House of Commons, regardless of whether he wins the leadership vote on March 24.

Topp kicked off his leadership announcement by talking about Layton, calling him a "hero" to New Democrats and saying he misses his friend. Layton died of cancer last month, after leading the NDP to its best election result in history on May 2, when the party won 103 seats and became the country's Official Opposition.

"No one can replace Jack, but we can honour him by making sure his dream of social justice will never die. We can carry on his work, that’s my pledge today," said Topp. "I pledge to continue to build our party on the strong foundations that Jack built."

In Monday's podcast, Brian Topp is in The War Room, along with Jaime Watt of Navigator Ltd, former NDP MP Lorne Nystrom and Rob Silver of Crestview Strategy.

Topp talked about wanting to lead Canada to be a more equitable country with a better environment and health-care system, and a strong economy that creates jobs. He said he will talk more in the coming months about his vision for the country.

He also spoke of wanting to finish what he started in 2008, when Liberal and NDP representatives crafted an agreement toward a potential coalition government that the Bloc Québécois was prepared to support in the House of Commons. Topp was a key player in the negotiations to replace the Conservative government — an effort that ultimately failed when Stephen Harper prorogued Parliament to avoid losing a confidence vote.

Topp said the coalition talks were "a project that almost rid Canada of Stephen Harper, which is a piece of unfinished business to which I am very much looking forward to getting back to." He said a merger between the NDP and the Liberals, however, is not on his agenda and that he doesn't subscribe to the belief that it's the only way to replace the Conservatives.

"We don't have to become Liberals to win," he said.

As a backroom party organizer, Topp is unknown to most Canadians, and he acknowledged it will be a challenge to raise his public profile but said it's one other candidates will also face.

He used part of his news conference to explain his background, saying he was born in Longueuil, Que., to a French mother and an English father, and has lived in cities across Canada. He touted his political experience, highlighting his long history with the NDP at the provincial and federal levels and his labour union experience. Topp currently serves as executive director of ACTRA, a national union for Canadian artists, and has worked with credit unions.

He said he joined the NDP in the 1980s to work with Broadbent, was deputy chief of staff to Romanow, worked on raising his party's profile in Quebec, and assisted on all of Layton's campaigns as federal NDP leader. He was elected party president this past June.

Broadbent, whose influential endorsement was considered integral to Layton's selection as NDP leader in 2003, said no one can match Topp's breadth of political experience and judgment and that he has the "special mix of character and intelligence" that he looks for in a leader.

"He has the political and intellectual substance we need to meet today’s challenge. He has the qualities Canadians require in a prime minister," he said. "He will make a great leader, an excellent prime minister."

Broadbent said that there will be other good candidates in the race but only one stands above the others. "Brian Topp is that person," Broadbent said. "He's a listener and a team player and he knows how to get things done."

Topp is the first out of the gate to declare his candidacy, and others may be waiting until after the NDP's caucus meetings this week. The caucus begins meeting Tuesday in Quebec City for three days and the gathering provides an opportunity for MPs interested in the job to gauge their support among their colleagues.

Quebec MP Nycole Turmel is serving as interim leader until a permanent one is chosen at the leadership convention in nearly seven months.