Prime Minister Justin Trudeau affirmed his desire Wednesday to see Britain remain in the European Union, on the eve of a historic vote marked by fierce campaigning and fond remembrance of a slain British lawmaker. 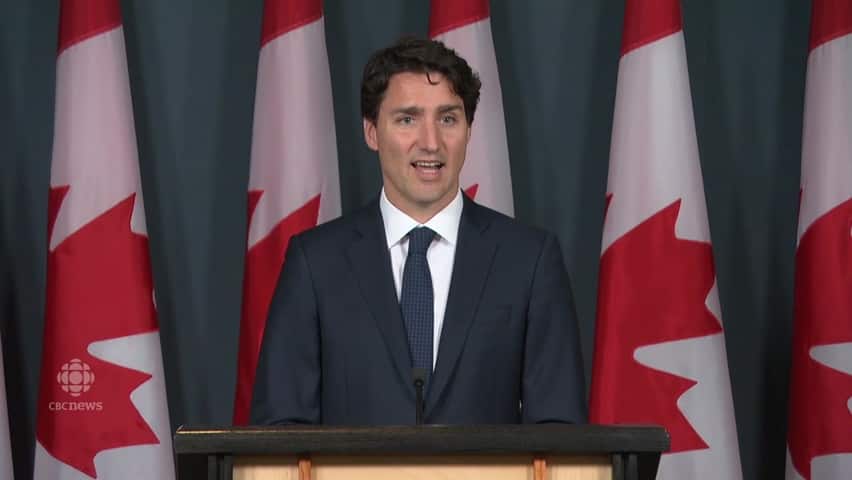 Trudeau on Brexit and CETA

5 years agoVideo
1:25
In his end of sitting press conference, Prime Minister Justin Trudeau discusses why he wants Britain to stay in the EU and why it matters to Canada. 1:25

Prime Minister Justin Trudeau affirmed his desire Wednesday to see Britain remain in the European Union, on the eve of a historic vote marked by fierce campaigning and fond remembrance of a slain British lawmaker.

Trudeau said he wants to see Britain continue to be a strong voice in support of trade and economic prosperity as the country's voters decide Thursday whether to remain part of the 28-country bloc. Canada needs British support to move forward with the Comprehensive Economic and Trade Agreement, he added.

"Great Britain has always been a strong and positive voice around the European table in support of CETA," Trudeau told a news conference.

"So we certainly hope that the outcome of tomorrow will continue to assure that CETA has as many strong voices in support of it as we move forward towards ratification and implementation of an important deal for Canadians, for jobs and for our shared future."

The trade deal is a potentially lucrative one that both sides want to see ratified and in force by early next year.

Trudeau said he'll be watching the referendum closely, but it will be up to the British people to decide their future. He made it clear, however, he is not in favour of the so-called "Brexit" campaign to leave the EU.

"I've made no bones about the fact that I always believed that we are stronger together."

Last week, the top Canadian diplomat in Britain, High Commissioner Gordon Campbell, told The Canadian Press that if Britain votes to leave the EU it would have "generational" economic consequences that would ripple across the globe.

The EU referendum campaign marches on

Trudeau's remarks came on the final feverish day of campaigning in Britain. Prime Minister David Cameron made impassioned pleas for Britain to stay, saying the EU was in recovery and is "the largest single market in the world."

His main opponent on the leave side, former London Mayor Boris Johnson, said the time had come "to break away from the failing and dysfunctional EU system."

Meanwhile, thousands gathered in London and across the world to pay tribute to the slain British MP Jo Cox, who would have turned 42 on Wednesday. Her husband, Brendan, said the killing last week by a man who gave his name in court as "death to traitors, freedom for Britain" was "political" and "an act of terror designed to advance an agenda of hatred toward others."

He reminded the crowd that his wife was an ardent campaigner for Britain to remain in the EU.

In Ottawa, more than 100 people crammed the sidewalk in front of the British High Commission to pay tribute to Cox, placing pink and white roses at the foot of an improvised memorial.

The killing in Cox's northern England constituency temporarily stopped referendum campaigning and was seen by some as a potential blow to the Brexit side.

There was no direct mention of the referendum by those who came to pay tribute to Cox in Ottawa, but the values she embodied, including her firm desire to remain in the EU, were celebrated by those in attendance.

"Her message is one of tolerance, not of polarization; of respect for each other; of finding our common things, not our difference," said Oxfam Quebec's Lina Holguin, who became friends with Cox after living with her for a year during a work assignment in Britain.

"She was the most brilliant campaigner I ever met — so energetic, so committed."

"For me personally, it was very numbing," said Gould, one of several Canadian politicians who was on hand to pay respects to Cox.