Canadian carriers are rolling out new safety campaigns and policies to ease public skepticism about the 737 Max as they ready for the jet's first Canadian flights after being grounded for nearly two years.

As they prepare for the return of the Boeing 737 Max to Canadian skies for the first time in almost two years, Canada's two largest airlines are grappling with how to ease passenger wariness about the jet's reputation during a time of heightened anxiety around flying.

"The pandemic compounded people's concern about the Max," said WestJet's vice-president of communications and chief of staff, Richard Bartrem. "The angst around the pandemic drove their reticence to flying even higher."

Countries worldwide grounded the Max in March 2019 after two crashes just months apart, in Indonesia and Ethiopia, that killed 346 people including 18 Canadians and family that were permanent residents.

Transport Canada hasn't specified the date when Canadian airlines can resume using the 737 Max for passenger flights, but said it's imminent. Airlines expect an announcement could come as soon as this week.

A year ago, restoring confidence after two fatal crashes would have been a big challenge by itself. Now, Air Canada and WestJet are doing that during a pandemic, when WestJet's internal research shows travellers are more apprehensive about flying in general — and even more uncomfortable with flying on a Max than before.

The majority surveyed — 64 per cent — said they would avoid flying on the Max altogether, according to the latest data the airline shared with CBC News from the fall.

The two crashes exposed serious flaws with the plane's design and certification process.

Boeing agreed to pay $2.5 billion US after admitting to defrauding and obstructing the Federal Aviation Administration (FAA) in connection with evaluating the plane's flight-control system, called MCAS, which was found to have pushed the plane's nose down as pilots struggled to right it in the two crashes.

Canada's regulator said it has spent 15,000 hours independently verifying changes to the aircraft and ensuring Boeing and the FAA addressed all of its safety concerns. Last month, the U.S. became the first country to approve the plane to return to the skies, followed by Brazil.

75 per cent not comfortable with Max, WestJet finds

As WestJet aims to return its fleet to service on Jan. 21, the carrier has been tracking public opinion. The airline conducted a series of surveys with more than 800 Canadian flyers online over an 18-month period.

The results show that pre-pandemic in September 2019, 59 per cent of flyers surveyed said they would not be comfortable flying on a Max when it returns to passenger service. As the pandemic wore on, that number of wary travellers grew to 75 per cent in October.

Canadian travellers in Western and Atlantic Canada, along with business travellers, said they were more likely to get back on a 737 Max.

Ruth Adonya flew from Ottawa to Nigeria this week, but said she wouldn't have done it on a Max.

"I'm already anxious about flying," said Adonya when CBC News spoke to her at the Ottawa International Airport. "I know someone who died from one of the crashes. I'm very nervous about it, so I wouldn't get on."

To try and ease that apprehension, WestJet has released a new webpage with a safety video and a new policy it says is centred around transparency.

If you're booking on a Max, WestJet says it will make it clear that you can opt out at any time and change your flight to another plane free of charge. Notifications will also be sent to customers ahead of their flight reminding them.

"We never want to put anybody in a position where they feel they're being forced to be on that aircraft," said Bartrem, who added that WestJet hasn't decided how long the policy will be in effect.

"If you are at the gate and haven't read any of the emails or didn't notice at the time of booking, and you now look out the window and want to talk to a customer service agent [because you] realize it's the Max — if you don't want to get on, then we'll certainly book you onto another flight." 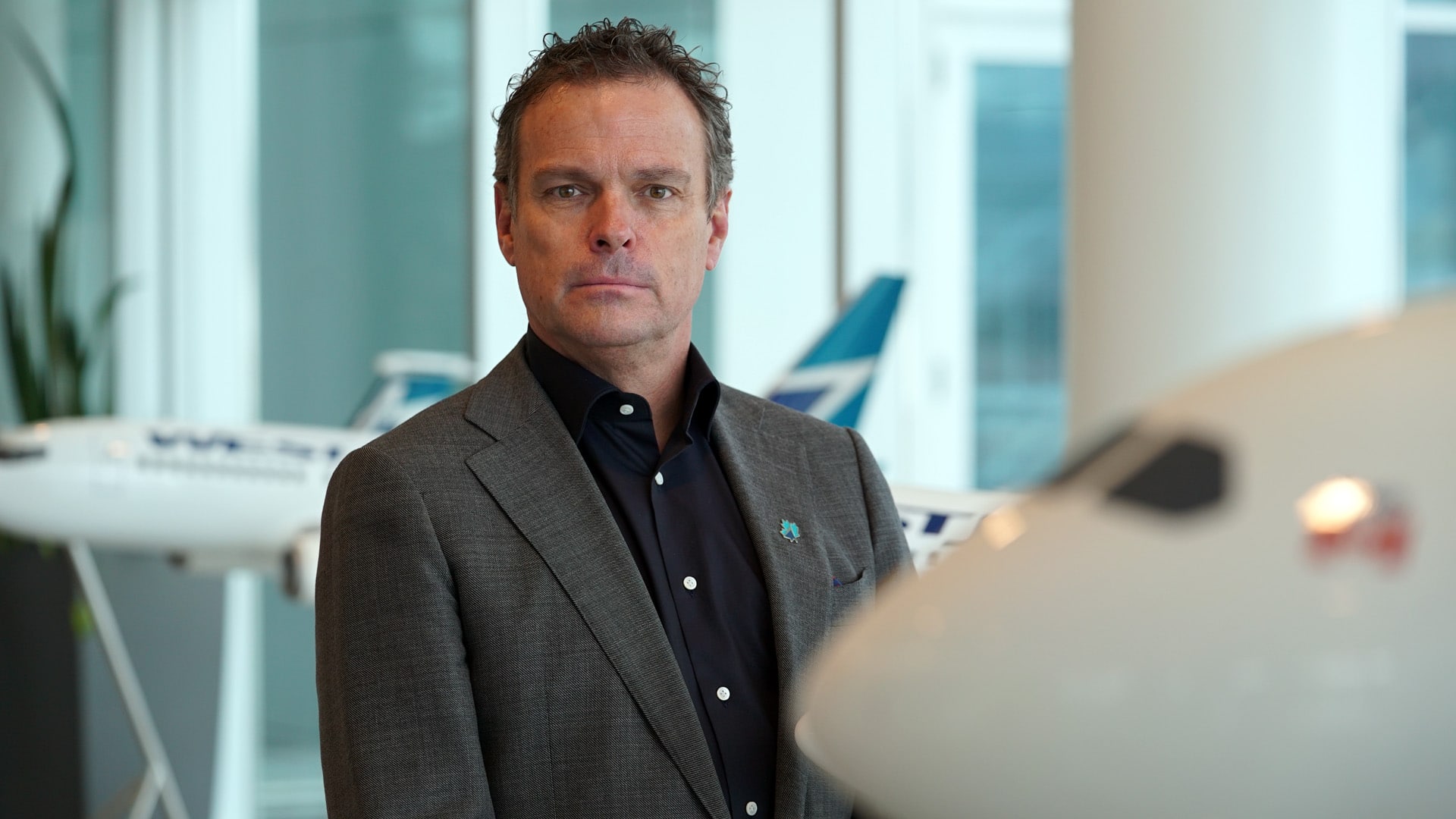 Transparent communication around return of 737 Max

1 month ago
0:50
WestJet vice-president of communications and chief of staff Richard Bartrem said the airline has decided that, 'the best way for us to move forward with the Max is to be as open and transparent in our communication as possible.' 0:50

Air Canada is aiming to start flying the Max on Feb.1, and said it plans to roll out a similar policy and dedicated webpage to educate the public about the safety of the aircraft.

"The strategy will be very similar," said Murray Strom, vice-president of flight operations. "We understand the apprehension, we have policies in place through our commercial division to alleviate passengers' concerns. We're not going to put a passenger on the airplane who doesn't want to be."

Strom said he has total confidence in the safety of the Max, because Transport Canada has asked the manufacturer and U.S. regulator thousands of questions over the past two years.

"You have to trust the experts that have certified this aircraft," he said. "People are skeptical of Boeing. They're not happy with the [Federal Aviation Administration]. But in Canada, we have a very strong certification group."

Sunwing declined CBC's request for an interview about its fleet of the aircraft and has not yet announced its plans to return the Max to service.

Airlines around the world have a lot riding on the successful return of the Max, especially during a time of historic financial losses. In Canada, the jet is a top performer in WestJet and Air Canada's fleets.

Air Canada said the Max is a greener aircraft and 20 per cent more fuel efficient compared to other models. It can cut operating costs by 11 per cent, "which is significant," the airline said in a statement to CBC News.

The Max has a longer range than previous 737 models, and is smaller than wide-body aircraft that are more expensive to operate. This allows the carrier to resume non-stop flights to destinations which haven't been profitable during the pandemic because too many seats were empty on larger aircraft to make the trip viable.

Air Canada said it offered flights to Hawaii on bigger jets over the holidays when air traffic was up, but it will end them on Jan. 23. It plans to resume flights on the route once the Max is back in service.

Everything that's been necessary to be done has been done, double checked, triple checked.- Richard Steer, Air Canada senior vice-president of operations

The airline said it's ready to start Max flights when Transport Canada gives its approval.

"Everything that's been necessary to be done has been done, double checked, triple checked," said Richard Steer, the senior vice-president of operations at Air Canada, who is responsible for the safe dispatch of the Max fleet.

"We are ready. The aircraft is ready, and we are just reintroducing the type that has performed well for us."

WATCH | Richard Steer on the airworthiness of the 737 Max: 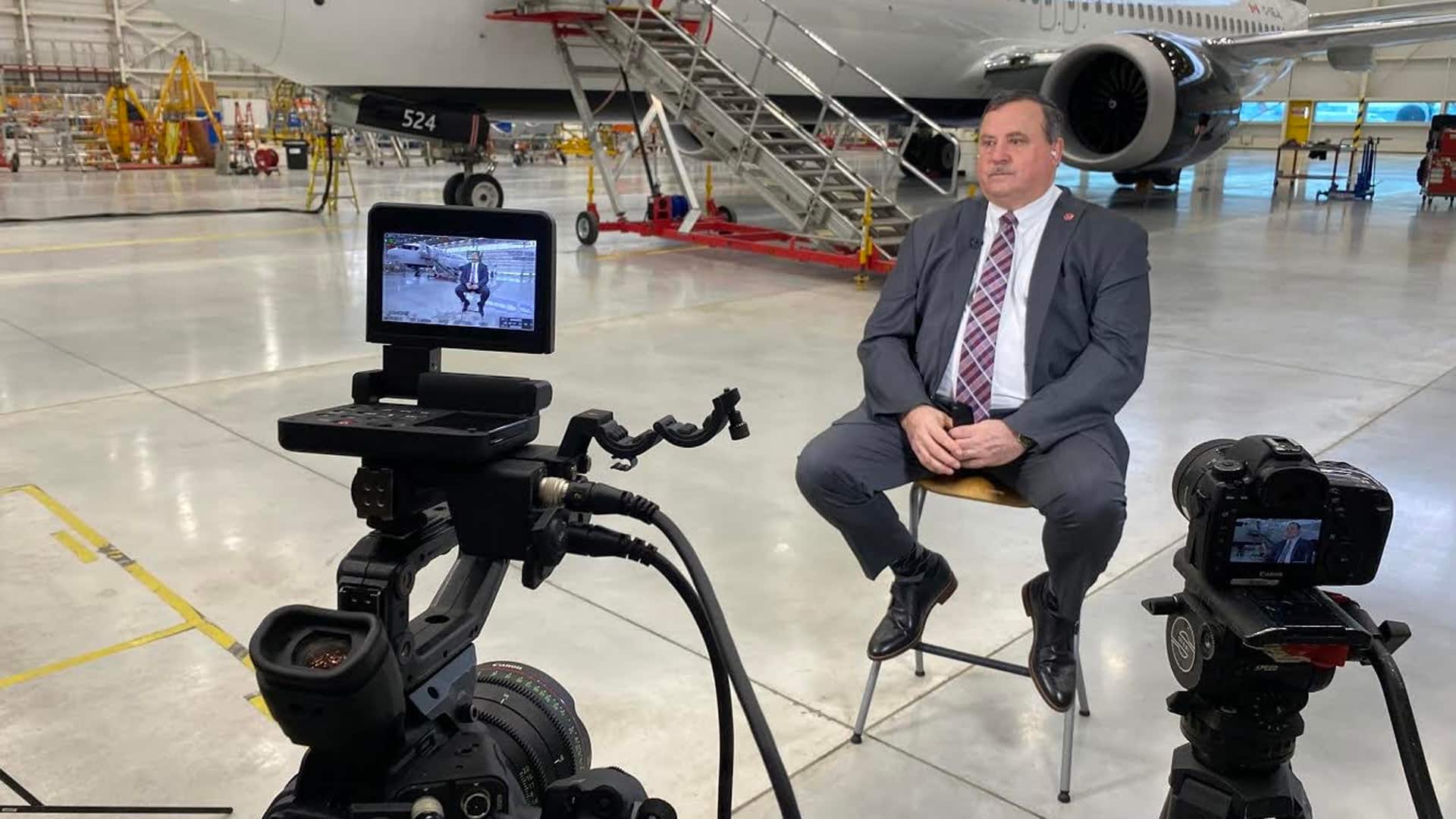 1 month ago
0:53
Richard Steer, the vice-president in charge of operations and maintenance for Air Canada, says it's human nature for the public to have some trepidation about the 737 Max, but he adds that the aircraft is safe and he would put his family onboard. 0:53

But the planned PR campaigns don't go far enough for Paul Njoroge. His three children, wife and mother-in-law died when a 737 Max went down in Ethiopia, just months after the first Max disaster. He wants airlines' websites to mention the crashes.

Njoroge said he didn't know about the Max crash in Indonesia when he booked his family's plane tickets. If he knew, he said, he wouldn't have put them on the flight.

"I'm sure some potential passengers will not know why you are telling them it's a 737 Max and they can opt out. You have to remind them ... that way they can make an informed decision."

Chris and Clariss Moore's daughter also died in the Ethiopian Airlines crash on her way to a UN assembly in Nairobi. They say Danielle was an activist, and that if she were alive today, she too would be demanding more answers from Transport Canada, Boeing and the FAA about the recertification process.

"I don't trust this plane and I never will," said Clariss Moore.

"We just want to make sure that they've done everything within the rules and the guidelines of the regulations, and to satisfy ourselves that it's safe," said Chris Moore.

WATCH | Chris and Clariss Moore still wary of the 737 Max:

Chris and Clariss Moore still wary of the 737 Max

1 month ago
1:39
Chris and Clariss Moore's daughter Danielle died in the Ethiopian Airlines crash of a 737 Max in 2019. The couple says they don't trust Boeing or the U.S. regulator's assurances that the aircraft is safe after what happened. 1:39

Chris Clearfield, a pilot of small planes and co-author of Meltdown: Why Our Systems Fail and What We Can Do, said he believes airlines "have a real uphill battle" ahead to change the public's perception.

He said ValuJet was able to rebrand its airline business after a deadly crash in 1996 in Florida, for example, but rebranding a widely used jet like the 737 Max is a completely different kind of challenge.

"This is an industry-wide problem," said Clearfield. "You can't sort of brand away the issue."

He said even though the airline industry is certain about the Max's safety now, it needs to be honest with passengers, and emphasize that there were problems and the industry learned from them. He expects that with time and a clean safety record, travellers' uneasiness about this jet will fade.

American Airlines has been flying the plane for about two weeks and has completed more than 100 flights. The airline said so far, "bookings on the Max are comparable to other aircraft, and we aren't seeing data to suggest customers don't want to fly on the aircraft."

WestJet plans to fly the Max commercially on Thursday pending Transport Canada approval. The airline announced it plans to operate three weekly round-trip flights between Calgary and Toronto for the next month as it evaluates adding more routes.

WATCH | The National's story about the how WestJet and Air Canada are preparing for the Boeing 737 Max 8's return to service in Canada: 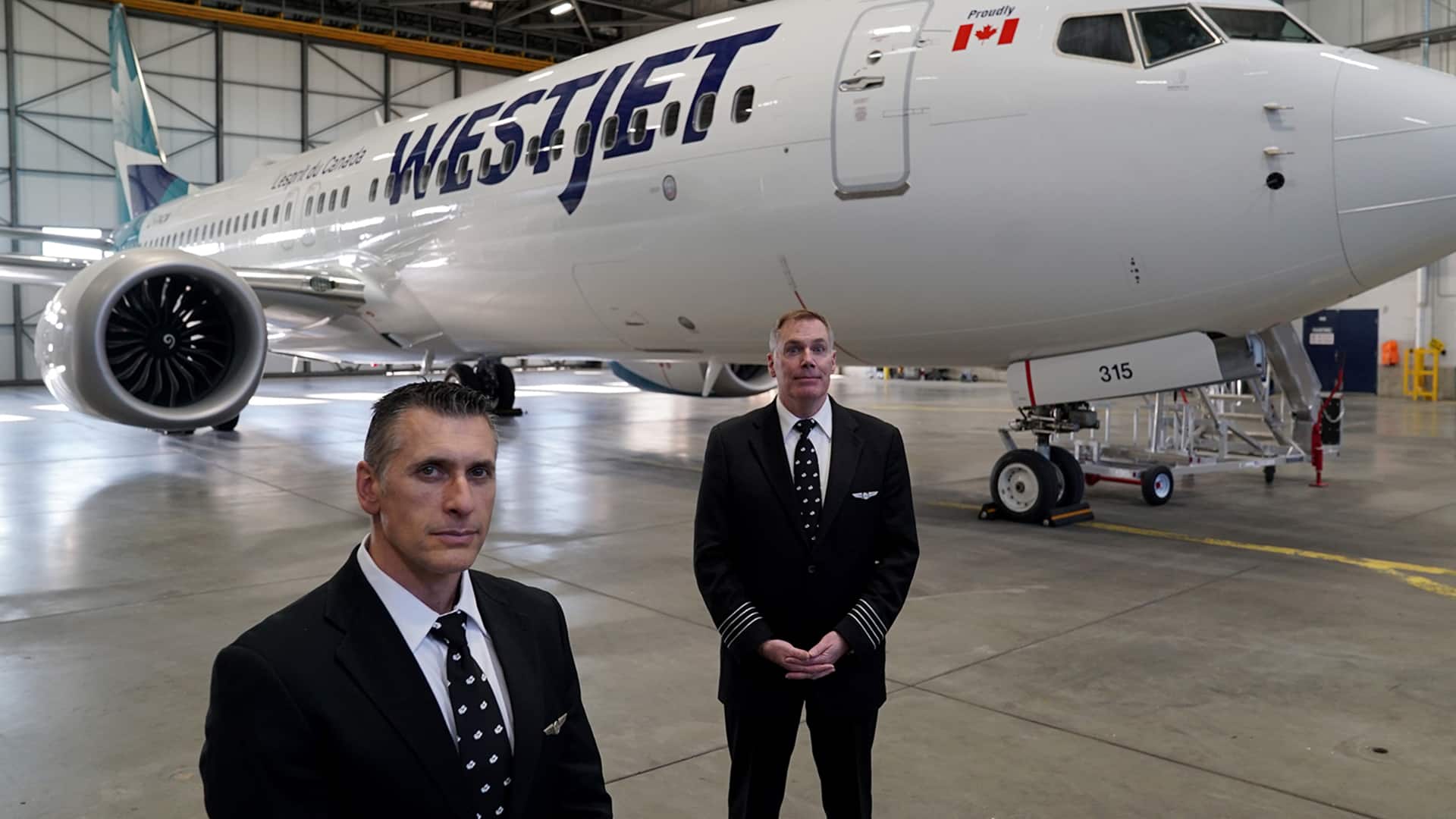 How Air Canada, WestJet are preparing for Boeing 737 Max’s return to the skies

1 month ago
7:16
Ian Hanomansing goes behind-the-scenes of what’s changed in the Boeing 737 Max as well as how Air Canada, WestJet and their pilots are preparing for the planes to return to flight nearly two years after deadly crashes grounded them. 7:16

With files from Ian Hanomansing