The House public safety committee concluded the first phase of its review of the government's proposed anti-terror bill on Thursday night. 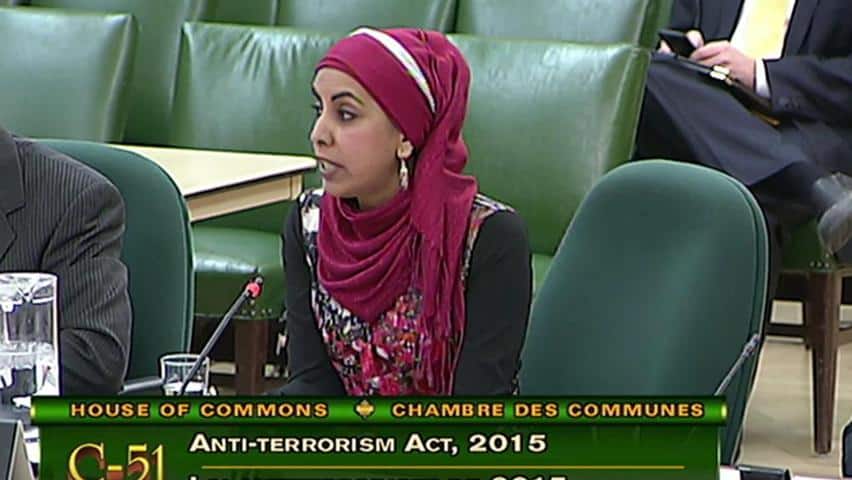 6 years ago
9:52
Little Mosque On the Prairie creator creator Zarqa Nawaz testifies at committee hearings on the government's anti-terror legislation. 9:52

The House public safety committee wrapped up the first phase of its review of the government's proposed anti-terror bill tonight, before moving on to a clause-by-clause review.

During the committee's morning session, Little Mosque on the Prairie creator Zarqa Nawaz told MPs that she "worries what [Bill] C-51 will do to our country."

Chief among her concerns is the fear of what she described as "increased marginalization and hysteria" targeting Muslims, including not just the proposed anti-terror bill but also the government's move to enforce its ban on niqabs at citizenship ceremonies.

In the 1990s, she said, she began to wear the hijab — "one of the first waves" of Canadian Muslims to do so, she said.

"In those days, no one cared what you wore, as long as you weren't infringing on anyone's rights," she recalled.

"You could stand at a citizenship ceremony wearing the pope's hat, or a niqab studded with diamonds, for all the minister of immigration cared at the time." 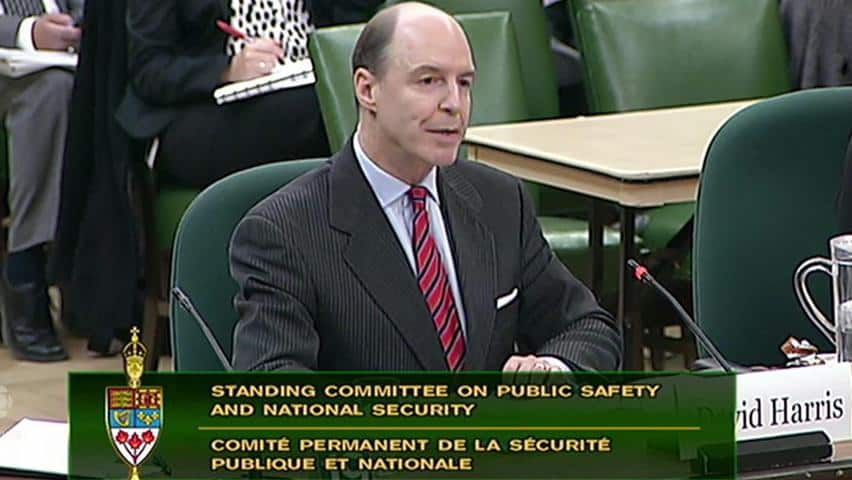 6 years ago
7:48
David Harris, the Director, International Intelligence Program, INSIGNIS Strategic Research used his time to offer a rebuttal to the President of the National Council of Canadian Muslims who appeared before the committee last week. 7:48

Nawaz, who works with the Islamic Association of Saskatchewan, appeared alongside security experts Ray Boisvert and David Harris, both of whom came out in strong support of the bill.

Boisvert told MPs that the current CSIS Act, which was developed in 1984 to address a "Cold War threat," became a "living anachronism" with the changing threat environment, particularly on the cyber front.

"It is my estimation that we have been both good and lucky" at avoiding terrorist attacks before the events of last fall, he argued.

During questioning, Boisvert also made a point of rebutting critics who claim the legislation will lead to protesters being targeted by CSIS — a suggestion at which he "takes great offence," he noted.

"Don't flatter yourself to that degree," he said, noting that during his years at CSIS, "we never had time" to look at more than the "top crust," which meant "no time to even look at lesser evils."

Harris, meanwhile, took advantage of his allotted speaking time to offer a rebuttal of his own — in this case, to National Council of Canadian Muslims president Ihsaan Gardee, who appeared before the committee last week.

Citing Gardee's characterization of the questions posed by Conservative MP Diane Ablonczy as "McCarthyesque," he devoted several minutes outlining his theory that the NCCM is connected, albeit indirectly, to groups and activists that support terrorism. 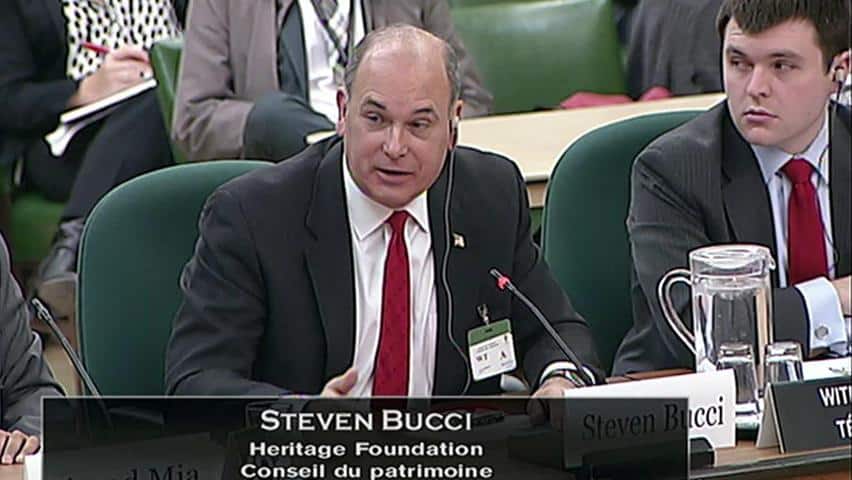 6 years ago
5:01
As hearings on the governments anti-terror legislation are coming to a close witnesses tell the committee that oversight is essential. 5:01

Both Boisvert and Harris seemed to acknowledge the continuing calls for increased oversight.

"The government deserves our support for the effort, but adjustments may be necessary," Harris said. 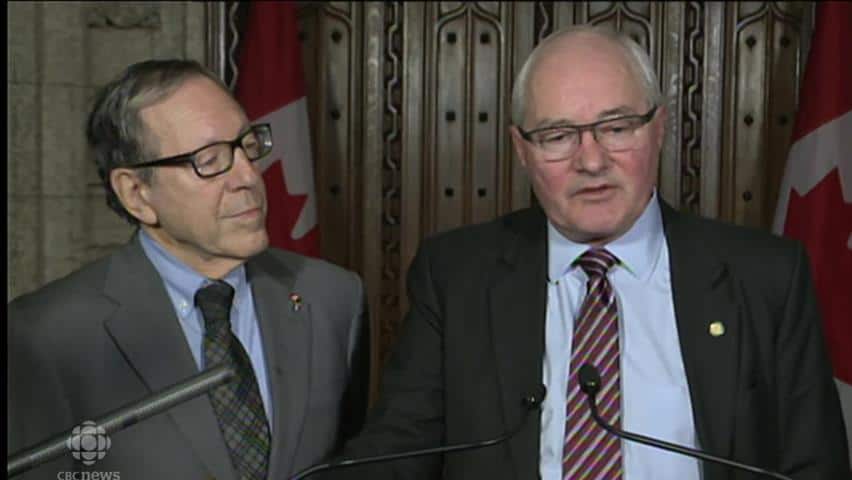 6 years ago
4:32
Liberal MPs Wayne Easter and Irwin Cotler respond to questions from CBC reporter Julie van Dusen about the need for oversight and the Liberal's proposed amendments to bill C-51. 4:32

In what is becoming a near universal trend for witnesses, both Mia and Cape concurred with the call for more oversight.

Cape suggested that the chair of the Security Intelligence Review Committee, the independent entity charged with reviewing CSIS operations, be made an officer of Parliament so he or she could report directly to the House.

Mia and Cape also agreed on the need for additional safeguards to protect privacy under the new information-sharing provisions, although Mia went considerably further than Cape in his criticism of the bill as drafted.

Shortly after the meeting wrapped up, Liberal public safety critic Wayne Easter joined his party's rights and freedoms critic Irwin Cotler to present their party's proposed amendments to the bill, which will be considered when a clause -by clause review begins next week.

Among their key recommendations: increased oversight and two separate sets of sunset clauses to ensure the bill gets mandatory parliamentary review after three years so MPs can study what Easter referred to as "the good, the bad and the ugly" consequences of its passage.

The New Democrats have also served notice in the House of a motion to authorize the committee to broaden the scope of its review, which would be required to make substantive changes to the bill.

Also offering what he frames as "recommendations for improvement" today is former Canadian Police Association executive officer and former security and policy adviser Scott Newark, whose commentary on the bill was released by the Macdonald-Laurier Institute on Thursday.

In a paper that promises "analysis without the hype or hysteria," Newark describes C-51 as a "measured response" to the threats facing Canada today, but suggests several areas where amendments may be warranted, including oversight.

He would also like to see the new provisions that would allow the removal of terrorist propaganda from the internet broadened to include material hosted outside Canada, as well as social media.

And he'd like to see "clarification" of the section on seeking court authorization for actions that would breach the Charter of Rights and Freedoms.

He also suggests that the committee consider adding a clause to create a mandatory five-year review by a joint parliamentary committee.