After vowing to take the summer months to consult with Indigenous people, Conservative Senator Lynn Beyak says she now believes all First Nations should renounce their Indigenous rights and integrate into Canadian society.

'None of us are leaving, so let’s stop the guilt and blame,' Conservative senator says in open letter

After vowing to take the summer months to meet with Indigenous people after a series of controversial remarks, Conservative Sen. Lynn Beyak says she now believes First Nations should give up their Indigenous rights and integrate into Canadian society.

"Trade your status card for a Canadian citizenship, with a fair and negotiated payout to each Indigenous man, woman and child in Canada, to settle all the outstanding land claims and treaties, and move forward together just like the leaders already do in Ottawa," she said in an open letter published Sept. 1 on her Senate website.

(Indigenous people born in this country are Canadian citizens, and were given full voting rights in 1960.)

"None of us are leaving, so let's stop the guilt and blame and find a way to live together and share," she wrote. "All Canadians are then free to preserve their cultures in their own communities, on their own time, with their own dime."

Beyak made headlines in the spring after CBC News first reported her defence of the Indian residential school system in the Senate. The northwestern Ontario senator later expanded on her remarks before being removed from the Red Chamber's Aboriginal Peoples committee by interim Conservative Leader Rona Ambrose.

The senator, appointed under former prime minister Stephen Harper, also denounced the Liberal government's recent move to split Indigenous and Northern Affairs Canada into two separate departments, with one focused on the delivery of services and the other tasked with negotiating treaties, among other initiatives.

Beyak said she worried this could simply lead to more bureaucracy and public servants who can do little to fix the ills that afflict many communities.

"No matter how qualified and well intentioned the participants, the last thing we need is another minister, ministry and bureaucracy in Ottawa to address the challenges," she said.

Beyak said Indigenous leaders have already assimilated into the mainstream, and so too should the "grassroots."

"The real problem, as identified in letters from the grassroots across the nation, and which no government has had the courage to address, is what they themselves identify as the Indian Act Industry in Ottawa, all living and working together comfortably, huge bureaucracies, massive expense accounts, fully assimilated to the ways of the white and Indigenous worlds, with available 5-star accommodations and business class travel, while the Indigenous population is constantly reminded that integration or assimilation is not good for them," she wrote.

White paper 'ahead of its time,' Beyak said

In revisiting her previous remarks, Beyak said she stood by her claim that history has been far too unkind to the residential school system. "A small number of Aboriginals found the schools bad," she wrote.

"Only 1 in 3 Indigenous children ever attended them. Very few were torn from their parents arms, but rather were enrolled by loving parents who were away trapping and trading for months on end."

The Truth and Reconciliation Commission (TRC) found some Indigenous students spoke highly of the skills they acquired, the benefits of recreation and sports, and the friendships they made at a school, but on the whole, for most students, academic success was elusive in the crowded classrooms and they often left feeling isolated from their families, culture and language.

Thousands are believed to have died at the schools, and thousands of others reported physical and sexual abuse. 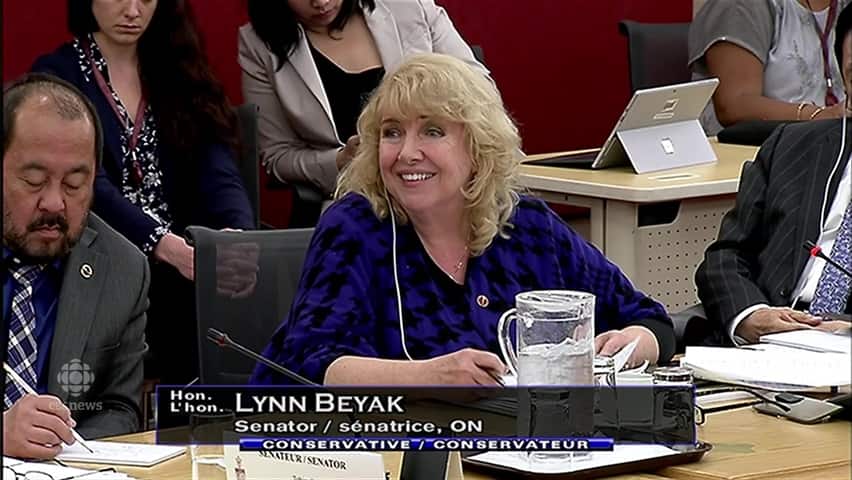 4 years ago
3:23
"The speech that caused so much hurt and distress was actually a speech about taxes," Senator Lynn Beyak insists. 3:23

Beyak did not respond to requests for an interview.

She said Trudeau, and Jean Chrétien, the government's then minister overseeing Indigenous affairs, "got it right."

"Their paper was brilliant and ahead of its time. Can you imagine how life would be for Indigenous people today, had it been implemented nearly 50 years ago? Indigenous leaders soundly rejected it, without consulting their own people, but it still has merit," she said. "We do not need an Indian Act. We have a Charter of Rights and Freedoms for all Canadians."

The white paper was later abandoned in the face of sustained outrage from First Nations people, who said their long-established treaty rights could not simply be extinguished unilaterally by the federal government.

The current Liberal government has also sought to dismantle parts of the Indian Act (namely parts that deal with land use) while maintaining constitutionally protected rights. Many First Nations people have spoken of their desire to get out from underneath the colonial document that dictates much of everyday life on reserves.

"What is also worrying is that she still won't admit she has a lot to learn. Once again, we suggest she sit down and listen to some of the survivors of residential schools. They have a great deal to teach her," Bennett said in a statement to CBC News.

Larry Smith, the Conservative leader in the Senate, issued a tersely worded statement late Thursday after Beyak's latest commentary came to light. He said Beyak's "personal opinions" do not reflect the positions of the larger caucus.

"Accordingly, we have taken additional steps to address Senator Beyak's ongoing role within our caucus," he said.