At least six times since becoming prime minister, Stephen Harper has received gifts of electric guitars, including one designed by Gene Simmons of KISS and another signed by Carlos Santana. Harper, who is better known as a keyboardist, sometimes jams with musical visitors to 24 Sussex Drive. 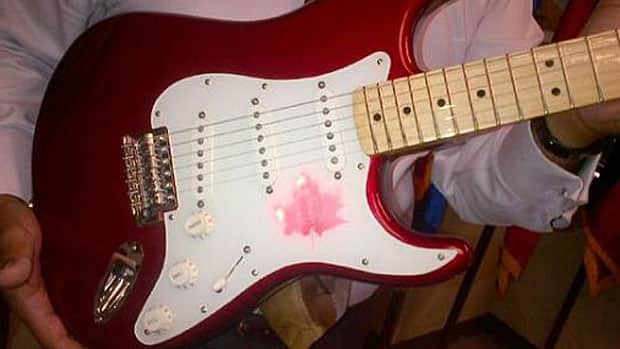 6 years agoVideo
2:38
Prime Minister Stephen Harper was recently gifted a Fender Stratocaster guitar as a thank-you to Canada. It's the latest in a growing collection. 2:38

Stephen Harper recently added the gift of a Fender Stratocaster to a growing collection of electric guitars, the sixth he’s received as prime minister.

Harper, a keyboardist, has a public passion for rock music and Beatles tunes, but his apparent interest in guitar collecting is little known, even in the local Ottawa music scene.

Among the choice instruments he's declared as gifts over the last five years are guitars signed by Carlos Santana and Gene Simmons, of KISS, as well as a Gibson Robot self-tuning guitar and a handcrafted Canadian electric guitar.

All are listed in Harper's gift-disclosure declarations to Canada's ethics commissioner, required under parliamentary rules for public office holders and recently reviewed by CBC News.

The latest acquisition is a custom-made Stratocaster built at the Fender Custom shop in Corona, Calif., in Riverside County. A county official sent the guitar to Harper in November, saying it was meant to honour Canada, the area's biggest trading partner.

The model includes a maple leaf emblem on the pickguard that lights up in red whenever the volume control is pressed.

"Please be assured that this iconic instrument will find a special place close to my piano," Harper said in a thank-you note quoted in a local paper last month.

The prime minister's son Ben is the family guitarist. And although his father made the gift declaration, Ben was the intended recipient of two guitars from Nickelback – a bass guitar and the Gibson Robot – in April 2010.

The Santana-signed guitar was a gift from the president of Mexico at the Toluca, Mexico, three amigos summit, though it was built by Paul Reed Smith of Maryland.

Another choice specimen is a handcrafted electric guitar built by the Wild Honey Guitar Co. of Mississauga, Ont., made and presented by a couple from Thunder Bay, Ont. The registry puts its value at $1,200, the only guitar declaration with a dollar value attached.

The Gene Simmons axe-shaped bass guitar is estimated from other sources to be worth about $5,000 US. Simmons has said he did a video conference with Harper to find out exactly how he wanted the guitar personalized.

Harper’s love of rock music was on display as recently as Dec. 9, when he and his band the Van Cats played at the annual Conservative Christmas party in Ottawa. The prime minister handled keyboards and sang tunes from Buddy Holly, the Beatles, Johnny Cash, John Denver and Guns N’ Roses.

The prime minister has also jammed with visiting musicians at 24 Sussex over the years, including Randy Bachman and Bryan Adams. A spokesman for Harper says he plays guitar a bit.

The manager of a local music shop said he was surprised to hear about the six guitars Harper received as gifts, as the prime minister is known primarily as a keyboard guy.

"Wow … it's surprising to me," said Peter Andruchow, manager of Steve's Music Store on Rideau Street, a few blocks east of Parliament Hill.

Members of Harper's family have been repeat customers, with Ben once buying a semi-acoustic jazz guitar and the prime minister himself showing up to try digital electric pianos for an hour, eventually leaving with the Roland FP-7 that is frequently seen in his musical interludes posted on YouTube.

"He's a real music guy," Andruchow said in an interview, recalling a remark the prime minister made as he was paying for the Roland with his credit card.

"He leans over to me and says: 'You know I've been to Abbey Road,'" referring to the famous London recording studio of the Beatles.