Prime Minister Justin Trudeau says building Kinder Morgan's Trans Mountain pipeline is in the national interest, but B.C. Liberal MPs are feeling less comfortable with the boss's decision, conceding it could hurt them at the ballot box in the next election.

'It will cause me problems,' Vancouver Centre MP Hedy Fry says after cabinet approves 1,150-km pipe

Prime Minister Justin Trudeau said building Kinder Morgan's Trans Mountain pipeline is in the national interest, but B.C. Liberal MPs were feeling less sure Wednesday that the leader's decision was in theirs, conceding it could hurt them at the ballot box in the next election.

"Cabinet made a decision, they weighed out the pros and the cons, and they came up with a decision. I'm not happy with the decision," veteran Vancouver Centre MP Hedy Fry told reporters. "Absolutely it is something that people in my riding feel strongly about, and it will cause me problems. There's no such thing as a safe politician."

Fry said most people living in her urban riding are opposed to the 1,150-kilometre pipeline, which will move a mix of 890,000 barrels of oil products a day from Edmonton to a terminal in Burnaby, B.C., for export to markets in Asia. 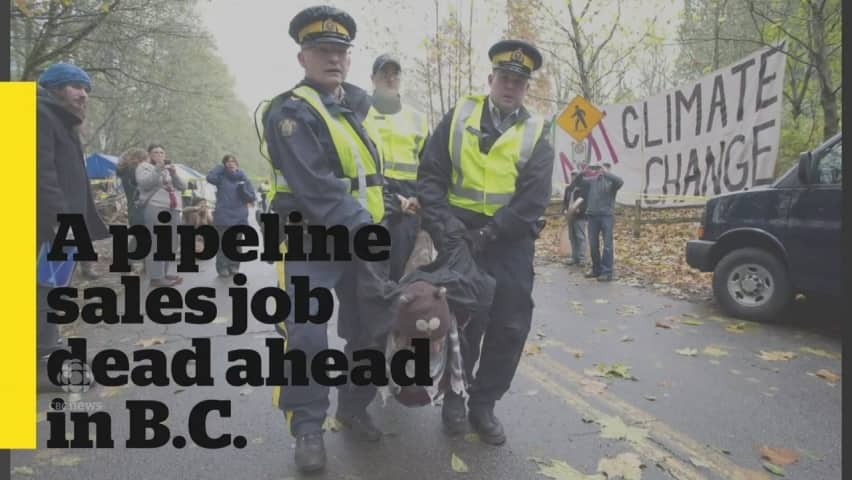 She said she will now turn her attention to ensuring the U.S.-based proponent, Kinder Morgan, meets the 157 conditions the NEB imposed on the project in April.

"You don't win every thing in politics, you've got to accept decisions that are made. But I think our PM is sensitive to B.C. issues, he's a B.C. boy, he grew up there."

The Liberals won 15 seats in the greater Vancouver area in the last election, up from the two they held after the disastrous 2011 campaign.

Polls suggest Canadians are split on whether they approve of further pipeline construction, but support is generally lower in B.C., according to an analysis by CBC.

"If I were a Liberal British Columbia member of Parliament, I would not be thinking there was a single safe thing about the prime minister approving Kinder Morgan," Green Party Leader Elizabeth May said after the announcement.

"Clearly, in my part of Vancouver, there's a lot of angst," she said. "Absolutely it's a majority, a clear majority [that are opposed to Kinder Morgan], and about half of those people are strongly opposed."

She said she wasn't thinking about the next election and losing votes to the NDP, which spoke out against the project Tuesday.

British Columbia NDP MP Peter Julian said in a tweet Wednesday that Liberal support for the pipeline was a "betrayal" to voters, as it accepted the project based on a flawed National Energy Board (NEB) process.

"These political calculation questions are interesting, and they may be important three years from now, but I'm really thinking about what are we doing to make sure that the 157 conditions are implemented ... that we have a program to support and protect the southern resident killer whale pods," Murray said in response.

Pamela Goldsmith-Jones, who represents the prosperous coastal area of West Vancouver, said the cabinet's move to green light the $6.8-billion project is "very, very difficult" for many people in her community to swallow, as some of the country's most prominent environmental leaders live in her riding.

"Yes, it's very challenging," she said, noting, however, that the government also announced some green-friendly promises, including the proposed oil tanker moratorium along B.C.'s North Coast and protections for the Great Bear rainforest after it "quashed" the Northern Gateway pipeline.

Jonathan Wilkinson, the parliamentary secretary to Environment Minister Catherine McKenna, and the MP for North Vancouver, said his constituents have raised a number of red flags about the safety of moving many more oil tankers through the area if the twinned pipeline is built.

He said the government has now responded to a number of his constituents' concerns, and he is satisfied with its "fulsome" response, including the pledge to spend $1.5 billion on coastal safety to develop a "world-class" spill response program.

Wilkinson, who crushed his Conservative opponent, incumbent Andrew Saxton, in the last campaign, said while a number of his voters are steadfastly opposed to pipeline expansion, he doesn't think it is enough to ruin his prospects of re-election.

"I think, over time, we will find that the impact from a political perspective will be very, very marginal. And I think, to be honest, there is a large group of folks out there who are actually interested in ensuring this government is focused on economic issues and growing the economy," he told reporters.

Infrastructure Minister Amarjeet Sohi said there were few tensions in caucus over the pipeline decision, despite some unease from B.C. MPs.

"We are a very strong team and we have diverse views, obviously, and we respect those views," Sohi said, who represents an Edmonton riding.