A fishing trip, contracts for professional services and one senator's own 50th wedding anniversary celebration are some of the ineligible expenses uncovered by Auditor General Michael Ferguson two-year review of Senate spending.

Results of two-year, $23.5 million audit released to the public 5 years ago
6:26
Auditor General Michael Ferguson explains the Senate Expenses Report issued by his office, and explains why he feels the $23 million price tag is worth it. 6:26

A fishing trip, contracts for professional services and one senator's own 50th wedding anniversary celebration are some of the ineligible expenses filed under the guise of parliamentary business, Auditor General Michael Ferguson found in his comprehensive two-year review of Senate spending released today.

This is the first full look at the auditor general's report after leaks last week revealed 30 current and former senators were flagged for questionable spending claims totalling nearly $1 million. Nine of those cases, including those of two sitting senators, have been sent to the RCMP for possible investigation.

During a press conference to discuss his findings, Ferguson said he was "struck by the overall lack of transparency and accountability" exercised both by the institution as a whole and by some individual senators.

"A number of senators simply felt they didn't have to account for, or they didn't have to be transparent, with their spending," Ferguson said, adding it wasn't just about not making information available but seemed to be a "strongly-held part of the culture."

The audit found "a lack of independent oversight," with senators governed according to rules they have designed themselves. The report said senators can choose not to enforce those rules and can keep information from being disclosed to the public.

"Transformational change" is required to address the weakness and problems the audit uncovered, the report said. "Simply changing or adding to the existing rules will not be enough."

The audit was launched after questions arose about living expenses claimed by Brazeau, Duffy and Mac Harb, and Wallin's travel expenses, in late 2012 and early 2013. Harb resigned and the other three were suspended as the RCMP investigated their expenses. All have been charged except Wallin.

Senate hesitant to adopt all recommendations

Housakos said the Senate embraces "wholeheartedly" the fundamental principle of accountability within the auditor general's report and will look at all the recommendations and institute them "step-by-step going forward." He said the upper chamber has already begun instituting some of them. 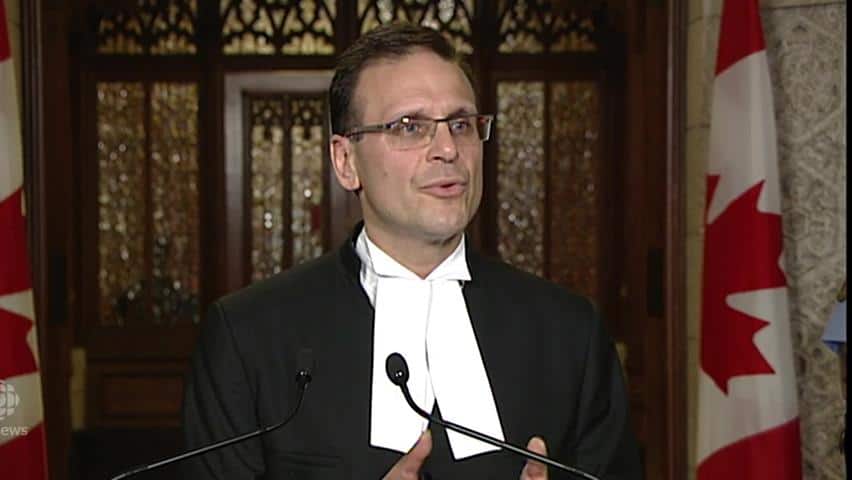 5 years ago
7:06
Senate Speaker Leo Housakos, the Leader of the Government in the Senate Claude Carignan, and Leader of the Senate Liberals James Cowan all react to the Auditor General's report on Senate Expenses that was tabled today. 7:06

But he did not go so far as to say that the Senate will accept the recommendations as written.

When it comes to an independent oversight mechanism, for example, Housakos referred to the expense claims arbitration process, headed by retired Supreme Court Justice Ian Binnie.

"There will be more disclosure, more oversight and better controls," Housakos said.

Binnie was appointed by Housakos last month to act as an arbiter for disputes arising out of the auditor general's findings and future questions over senators' spending.

For his part, the auditor general said the appointment of an independent arbiter was "a step in the right direction," but added to ensure adequate oversight, a body with more powers and more responsibilities is needed.

Auditing the Senate doesn't come cheap. It cost taxpayers $23.5 million for Ferguson and his team to go through the files of individual senators with a fine-toothed comb, ultimately yielding only about $1 million in questionable expenses.

Ferguson said he isn't happy to have spent that much money and resources, but he argued the value goes beyond a straight dollar-to-dollar comparison. Look at the results, he said, which will include tightening up of senators' expenses and an overall change in behaviour.

The comprehensive audit examined more than 80,000 expense claims of 116 current and former senators between April 1, 2011 and March 31, 2013. Those expenses, totalling $45 million, include travel and living expenses and contracts.

At the heart of the audit was whether or not expenses were primarily for the conduct of parliamentary business.

The three cases with the highest sum of questionable claims, which are among the nine referred to the RCMP, are:

Ferguson said that in five of the nine cases, his team determined the senators and former senators were found to have been primarily residing in the national capital region.

He added that in four of the cases, a lack of cooperation on the part of senators, as well as missing documentation, prompted the referral to "other authorities with more investigative powers" in order to determine the situations.

Twenty-one other senators are flagged for ineligible expenses.

Housakos and Carignan said Boisvenu and Kenny will also be referred to the Senate ethics officer to see if disciplinary action is needed.

Asked why the two weren't immediately suspended without pay like senators Mike Duffy, Patrick Brazeau and Pamela Wallin, Carignan said the system has since changed. He said after criticism of the Senate's actions in those cases, it was determined it was inappropriate for a legislative body to decide what the most appropriate sanctions are.

St. Germain's ​$67,588 in questionable expenses included travel for staff members who attended six charity and political parties at his homes, as well as his 50th wedding celebration, a gala where he received an award, and his own retirement party.

St. Germain argues in his written response that public business was also conducted during the flagged trips and his staff were needed for support. St. Germain has repaid part of the questionable expenses, according to the Senate.

The audit found Oliver claimed $48,088 in questionable expenses for himself and his wife, including a family member's convocation in Kingston, golf with former senators in Montreal, a fishing trip and meetings with a family member and a tailor.

The audit also questioned whether $22,982 of those expenses were for trips taken as part of his role in an organization that promotes wines, cuisine and tourism overseas.

Oliver has repaid $1,442 including for the convocation and the fishing trip, according to the audit.

Oliver's written response, included with the report, calls the findings "not factually correct" and a misrepresentation of his own "patient explanations" of his expense claims.

The audit found that many of Zimmer's expenses were ineligible because he declared Winnipeg, Man. as his primary residence but spent 613 of 731 days included in the audit period in Ottawa. He claimed travel expenses for 14 trips in which he flew to Winnipeg then back to Ottawa on the same day.

The audit found Zimmer and his wife, Maygan Sensenberger, took $102,524 worth of round trips from Ottawa to Winnipeg without conducting parliamentary business — and that Sensenberger charged the Senate $2,072 in personal taxi rides in Ottawa and another $645 in unexplained expenses.

The audit also found that Zimmer claimed $12,435 for two professional contracts that were not for parliamentary business, and did not return a digital camera and computer equipment to the Senate after he retired.

In a 500-word response to the audit's findings, Zimmer argued Winnipeg was his primary residence but that he spent most of his time in Ottawa due to health concerns and the stress of travel.

The audit found that Charette-Poulin had "conflicting or insufficient information" for more than $130,000 in claims, questioning whether some of her travel expenses were for her work as a counsel for a law firm, to visit family members or to support her husband's business activities. The audit details that she has repaid $5,606 of those questionable expenses.

Boisvenu, who announced he was leaving the Conservative caucus last week after learning he was the subject of an RCMP investigation, was found to have $61,076 in questionable claims, including $38,577 spent on travel and accommodations for parliamentary business that may have been for personal business related to his advocacy for the rights of victims and their families.

New Democrat MP Charlie Angus said Tuesday the auditor general's report is important is because "we're dealing with a body that does not see itself as accountable to the Canadian people.

See the full list of 30 senators and the amounts flagged by the auditor general.