Meeting of MPs over NATO association descends into chaos — and singing

A Liberal effort to remove an Opposition MP from her position as chair of a multi-party parliamentary group descended into chaos Tuesday night, with Tory staffers taking to song in an attempt to register their displeasure and disrupt the proceeding.

The next day, Liberal MP accuses Conservatives of 'feeding vodka to their staffers'

A Liberal effort to remove an opposition MP from her position as chair of a multi-party parliamentary group descended into chaos Tuesday night, with Tory staffers and at least one MP taking to song in an attempt to register their displeasure and disrupt the proceeding.

Leona Alleslev, a one-time Liberal who recently crossed the floor to join the Conservatives, was the chair of the Canadian NATO parliamentary association going into to Tuesday evening's meeting.

By the end of the meeting, Alleslev had been replaced by Liberal MP Borys Wrzesnewskyj.

So, our self-declared feminist Prime Minister has ordered his MPs to take out the Chair of the non-partisan NATO Parliamentary Association. The current chair is a female Veteran of the Canadian Armed Forces. <a href="https://twitter.com/hashtag/SunnyWays?src=hash&amp;ref_src=twsrc%5Etfw">#SunnyWays</a> <a href="https://t.co/WxilQi3LsS">pic.twitter.com/WxilQi3LsS</a>

But on the way, a disagreement broke out between the Conservatives and the Liberals about replacing Alleslev and whether the meeting was in order.

Mobile phone footage of the meeting shows several Conservative staffers and Conservative MP Garnett Genuis in the corner singing the lyrics to a number of songs — including Take Me Home, Country Roads by John Denver — as they held red cups and cradled open binders in front of them.

In one such video given to CBC News, a number of officers with the Parliamentary Protective Service can be seen trying to encourage the staffers to leave. 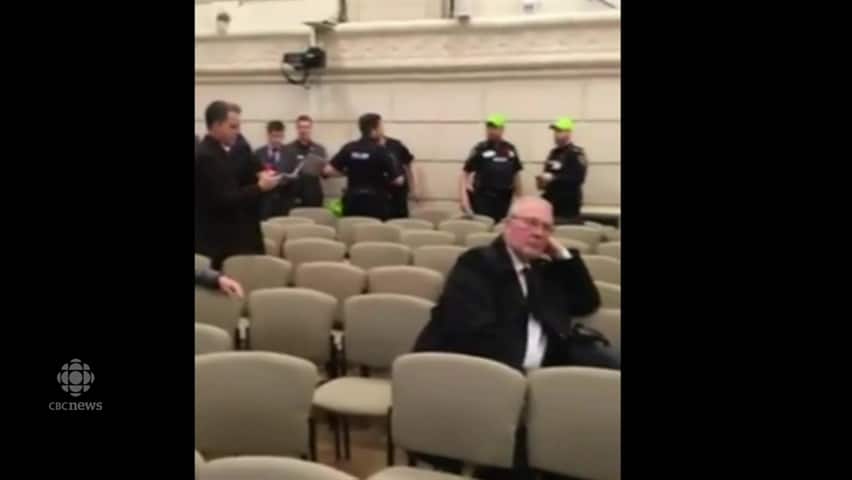 2 years agoVideo
0:26
Conservative staffers break into song to disrupt a meeting that saw the Liberals vote to remove a former Liberal MP who crossed the floor to the Tories from her position as chair of an inter-parliamentary association. 0:26

The meeting was eventually called back to order and a vote was held to install Wrzesnewskyj as the head of the association.

Conservative MP Erin O'Toole later took to Twitter to describe the affair as a "farce," saying that the Liberals called the meeting for no other reason than to "exact political revenge on an MP who had lost confidence in them."

O'Toole made the point of questioning Prime Minister Justin Trudeau's feminist credentials in one of his tweets, noting that Alleslev was a female and former member of the Forces.

The next day Conservative MP John Nater raised a point of order after question period in which he said Tuesday evening's meeting was illegitimate because Alleslev, after consulting a clerk, had adjourned the meeting, nullifying anything that happened afterward.

The meeting proceeded to have a vote in which Wrzesnewskyj was elected chair, a move that Nater said was an "illegal and illegitimate election."

"We dispute the validity of this election and will be exploring all available avenues including judicial recourse," Nater said in the House Wednesday afternoon.

The Conservatives then asked Speaker Geoff Regan to issue an order to overrule Wrzesnewskyj's election and advise NATO that the Canadian delegation heading to Halifax in mid November will be headed up by Alleslev. The Speaker said he would make a ruling and report that back to the House.

In response, Liberal MP Robert Cuzner stood and said that in his 19 years in the House of Commons he had never seen a meeting like that.

"The process certainly wasn't enhanced when members of the Conservative Party were feeding vodka to their staffers who were singing and had to be escorted out by security," Cuzner said.

"It was one of the most shameful and deliberate attacks on the democracy of those types of groups, and they should apologize to the House for it."

Earlier in the day Genuis explained that "other activities" were going on in the room and spoke to his and Conservative staffers' consumption of alcohol in the meeting room.

"Sometimes, after hours, drinking happens on Parliament Hill; is that a surprise/" Genuis asked, saying that he could not tell if the alcohol was vodka or gin because it was cheap and tasted like gasoline.