A special committee of MPs and senators says Canadians with grievous - but not necessarily terminal - conditions should have the right to medical help in dying. The committee makes 21 recommendations as the government prepares to draft new legislation on medically-assisted dying. 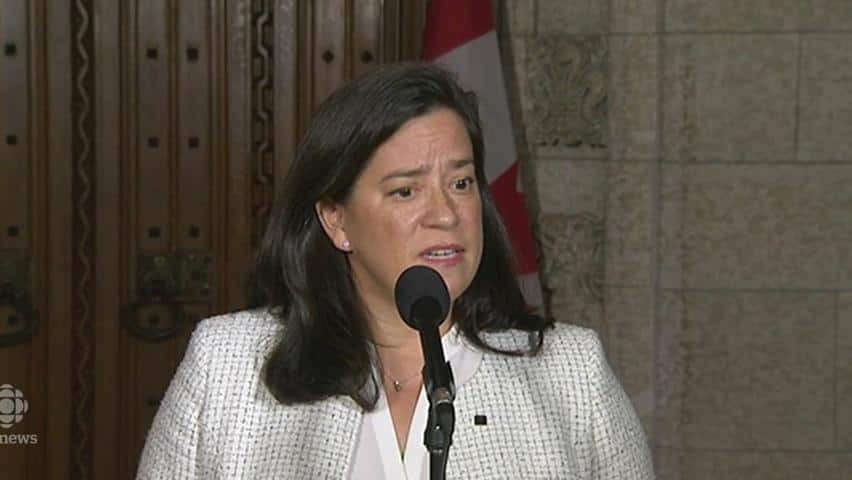 5 years ago
2:34
Justice Minister Jody Wilson-Raybould discusses next steps after the tabling of the report on doctor-assisted death. 2:34

Mature minors and mentally ill people should not be excluded from the right to doctor-assisted death, according to a special committee of MPs and senators.

A 70-page report tabled Thursday, called "Medical Assistance in Dying: A Patient-Centred Approach," also says Canadians should have the right to make an "advance request" for medical aid in dying after being diagnosed with certain debilitating, but not necessarily terminal, conditions.

It says the right to assisted death should not be limited to physical conditions, and that Canadians with psychiatric conditions should not be excluded from doctor assistance to end suffering.

"The committee recognizes that there will be unique challenges in applying the eligibility criteria for medical assistance in dying where the patient has a mental illness, particularly where such an illness is the condition underlying the request," the report reads.

"However, where a person is competent and fits the other criteria set out by law, the committee does not see how that individual could be denied a recognized Charter right based on his or her mental health condition."

The report also recommends a two-stage legislative process. The first would apply to competent adults 18 years or older to be followed by a second stage with competent mature "minors" to come in to force no later than three years later. 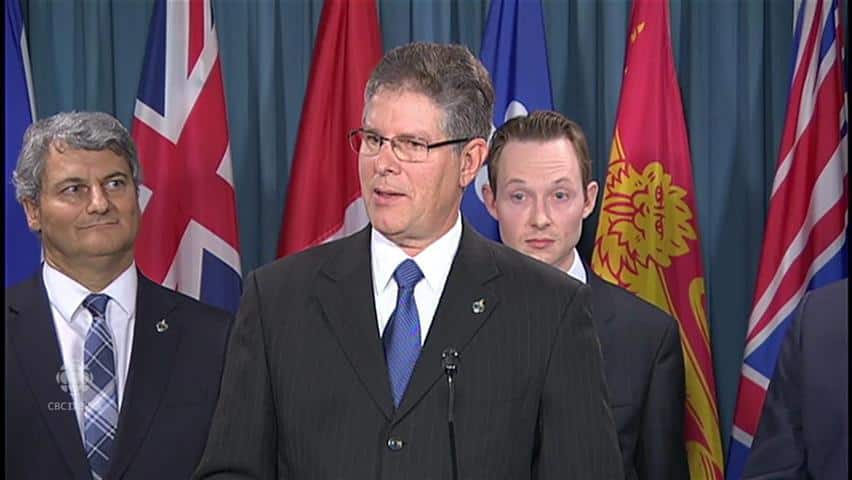 The age for consent has been one of the most contentious issues in the right-to-die debate. The Canadian Paediatric Society pushed to exclude minors regardless of competence. But the committee referred to the Supreme Court's statement that minors have a right "to a degree of decision-making autonomy that is reflective of their evolving intelligence and understanding."

"Given existing practices with respect to mature minors in health care and the obvious fact that minors can suffer as much as any adult, the committee feels that it is difficult to justify an outright ban on access to medical assistance in death for minors," the report concludes.

In all, the report makes 21 recommendations, including:

Justice Minister Jody Wilson-Raybould said the government will take a "comprehensive and balanced approach" to the sensitive issue, and that cabinet would hold discussions within weeks.

She promised to work with the provinces on a framework for new legislation, but would not say if federal laws would supercede provincial legislation already in place in Quebec.

On the issue of doctor-assisted death for mature minors, Wilson-Raybould said it is premature to discuss the parameters.

The committee heard from 61 witnesses and reviewed more than 100 written submissions. It will serve as the roadmap for legislation on physician-assisted death.

But Conservative MPs on the committee delivered a dissenting report, insisting the recommendations go too far and fail to protect vulnerable Canadians. 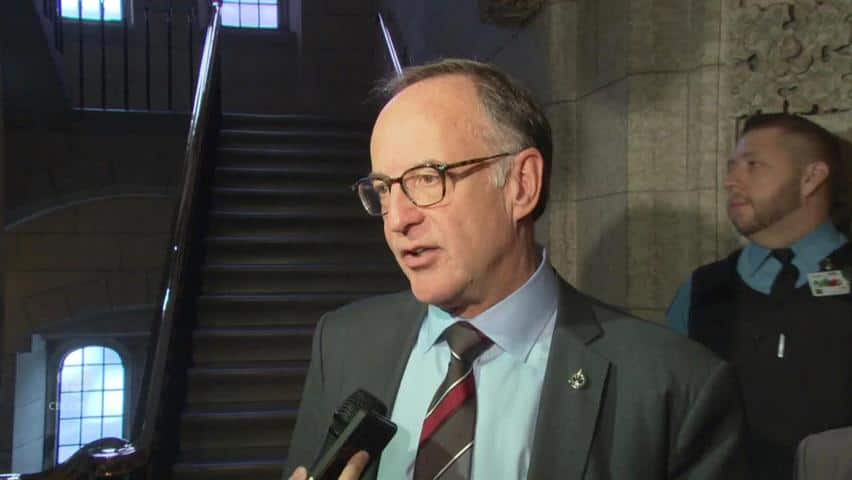 5 years ago
3:31
Robert Oliphant, Chair of a special committee of MPs and senators looking at doctor-assisted death, discusses their report which was tabled today in the House. 3:31

Conservative MP Harold Albrecht said there are no safeguards for those who are suffering from depression.

"While they may not be irremediable in the sense of a cure, there are many people living today who have gone through severe depression, who if this model is adopted could have found themselves in a situation where they have taken a permanent solution, a tragic permanent solution, to what was in fact a temporary problem," he said.

Dr. Raj Bhatla. psychiatrist in chief at Royal Ottawa Mental Health Centre, said the report's recommendation is appropriate because mental illness must be fundamentally treated "on par" with physical illness. But he warned that specific safeguards must be put in place because the nature of mental conditions can affect a person's consent capacity.

In many cases there are ways to alleviate suffering, if a person's mental health is affected by a lack of housing or poor finances, for example.

"You don't want that to determine whether they live or hasten death," he said.

Last February, the Supreme Court struck down the prohibition on assisted death, giving Parliament one year to enact new laws. This February, the high court granted the new Liberal government a four-month extension, to June 6.

The Supreme Court's unanimous ruling said the ban on physician assisted death violated Canadians' charter rights and that people with "grievous and irremediable" medical conditions should be able to die with the help of a doctor.

"Without the option to consent in advance to assisted dying, Canadians with dementia who want to die in peace with the help of a physician face a dire choice: access assisted dying prematurely, while they are still competent; or risk losing competence before their wishes can be carried out, only to be condemned to the exact fate they sought to avoid."

The report also calls for more study around palliative care, mental health and dementia, as well as issues specific to Indigenous people and communities. 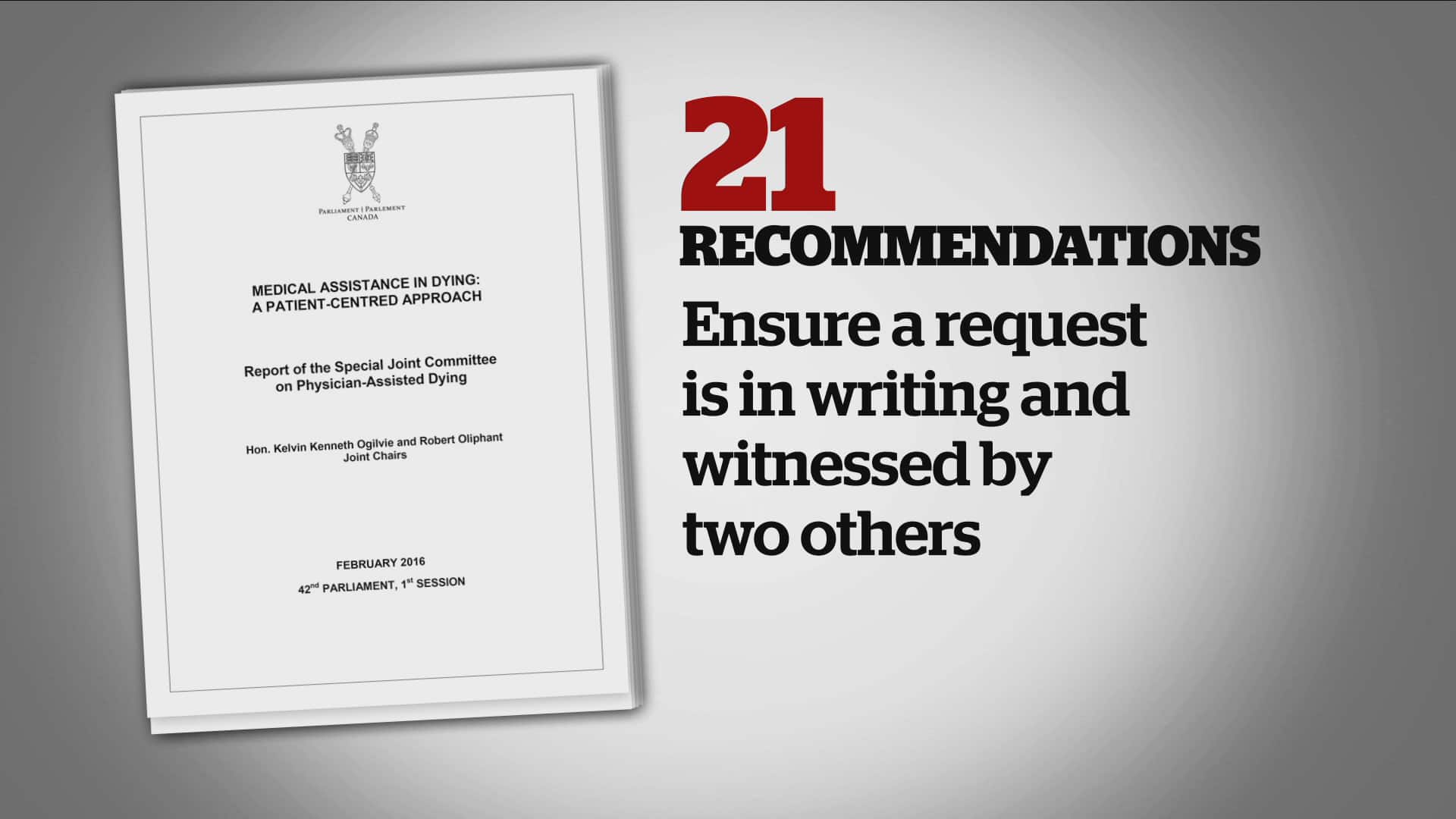 Committee co-chair Rob Oliphant said there must be proper safeguards to protect the vulnerable and medical practitioners.

"At the same time, we want to ensure that a person with a disability, no matter what it is, has every right that every other Canadian has," he said.

The NDP supports the report's recommendations but insists that physician-assisted death must come with improved plan for palliative care, including increased funding and enhanced supports for caregivers.

"There's an urgency to respond to the Carter decision, but there's an equal urgency for the federal government to say that they will meet the challenges and they will establish a strong and vigorous palliative-care strategy," said Ontario NDP MP Charlie Angus.