The Senate has sent the federal government's controversial bill on assisted dying back to the House of Commons with a major amendment that guts the central premise of the proposed law: that only those who are near death should qualify for medical help to end their lives.

The Senate has sent the federal government's controversial bill on assisted dying back to the House of Commons with a major amendment that guts the central premise of the proposed law: that only those who are near death should qualify for medical help to end their lives.

The bill, as amended over the past two weeks of lengthy debate in the upper house, passed late Wednesday by a vote of 64-12 with one abstention.

Support for the amended bill was not as overwhelming as the raw numbers suggest. Some senators, including government representative Peter Harder, voted for it rather than risk having the bill defeated altogether.

Harder told senators that defeat of the amended bill would "bring the whole law down" and result in a situation that "would be intolerable and Canadians would find unacceptable." He made it clear that he expects the House of Commons will not accept all of the Senate amendments and will send the bill back to the upper house for further consideration.

Still, the vote sets appointed senators on a potential collision course with elected MPs. The Trudeau government has signalled it won't accept deletion of the near-death proviso, although it may agree to one or more of six other relatively minor amendments approved by the Senate.

Prime Minister Justin Trudeau appears to be counting on senators to eventually back down on the issue. Liberal backbenchers privately say Trudeau told MPs during their weekly, closed-door caucus meeting earlier Wednesday that it would be "appropriate" for appointed senators to defer to the will of the elected House of Commons on the matter and he seemed confident they would do so.

Even before Wednesday's vote, senators were anticipating that the amended bill will be rejected and were wrestling with whether they should stand firm on deleting the near-death provision or bow to the will of the elected parliamentary chamber.

If it is rejected, senators could agree to pass the bill unchanged. Or they could "insist" upon their amendment and send it back to the Commons, repeatedly if necessary, until one side or the other gives in. Or they could defeat the bill outright.

'Defer or stand our ground'?

Independent Sen. Murray Sinclair argued that the Senate has no business defying the Commons.

"We are not an elected body," he said during final debate on the amended bill.

"We must therefore recognize that it is those upon whom we impose our will (in the Commons) who are going to be held accountable for what we do in this house and therefore we need to use that power very carefully."

Andre Pratte, another independent senator, admitted he's torn over whether to "defer or stand our ground." He expressed concern over how Canadians would view a deadlock between the two houses of Parliament. 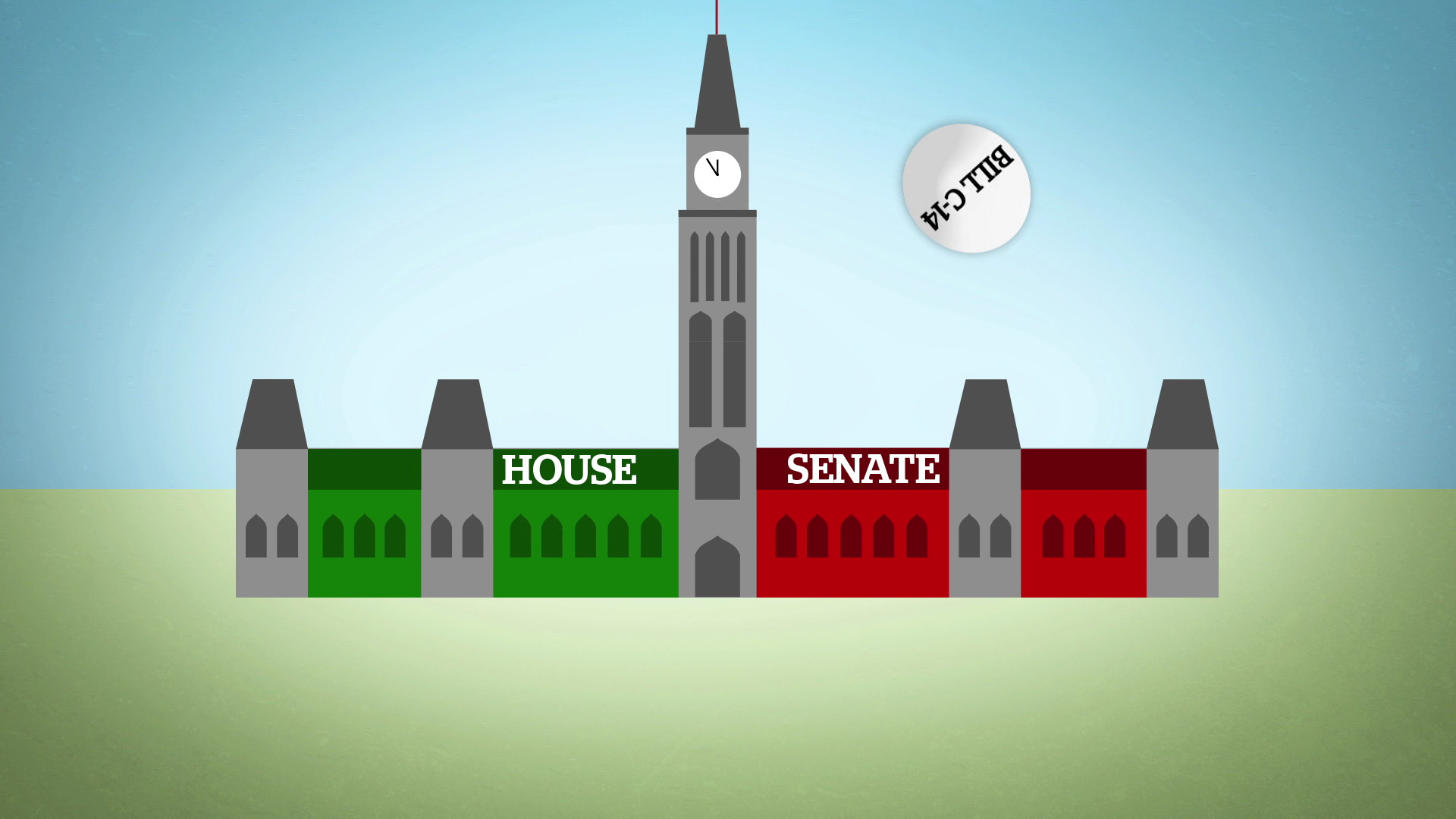 6 years ago
Duration 2:03
Senators' amendments to the assisted dying bill could lead to a parliamentary showdown with the House of Commons

But independent Liberal Sen. Dennis Dawson contended that Trudeau kicked senators out of the Liberal caucus and created a new process for appointing non-partisan senators precisely because he wanted the Senate to become an independent chamber of sober second thought.

"It is clear to me that the role of the Senate is to improve legislation when necessary, which it is with this bill," Dawson, who is being treated for throat cancer, said in a statement read during the debate by a fellow senator.

"This Senate cannot and must not allow itself to be intimidated. That is the exercise of sober second thought, the essential function of the Senate."

Independent Liberal Sen. Serge Joyal, author of the amendment to delete the near-death proviso, cited several examples where the Senate has in the past defied the will of the Commons on a matter of principle. He argued that the Senate has a duty to uphold the Constitution and charter of rights and to protect minority rights.

"(If) we come to the conclusion that the bill doesn't meet that threshold, well, we have the independence to maintain our position," he said.

Many legal and constitutional experts have argued that Bill C-14 does not comply with the charter or with last year's landmark Supreme Court ruling, which struck down the ban on assisted dying.

Joyal's amendment would replace C-14's restrictive eligibility criteria with the more permissive parameters set down by the top court, which directed that medical assistance in dying should be available to clearly consenting, competent adults with "grievous and irremediable" medical conditions that are causing enduring suffering that they find intolerable.

C-14 would allow assisted dying only for consenting adults "in an advanced stage of irreversible decline" from a serious and "incurable" disease, illness or disability and for whom natural death is "reasonably foreseeable."

"Bill C-14 took away a right from our most vulnerable, those who have perhaps years to endure intolerable suffering from an irremediable medical condition," said Conservative Sen. Kelvin Ogilvie. "Our amended bill restores that right."

Whether the Senate will ultimately pass the bill if the amendments are rejected is uncertain. While some senators are indicating that they'll defer to the Commons, others are wrestling with other considerations.

'I will struggle and I will pray'

A number of senators who are morally opposed to the notion of assisted dying indicated Wednesday that they'll never support the bill, no matter how it is, or is not, amended.

"Killing remains a grave evil, colleagues, even if it's disguised as medical assistance in dying," said Conservative Sen. Norman Doyle.

"I cannot support this legislation," said Conservative Sen. Betty Unger, saying she was speaking on behalf of the many "who weep that Canada's moral fabric is being destroyed, who beg us not to underestimate the harm that will follow when our hitherto and dearly held values are being shredded."

Still others said they too believe in the sanctity of human life but are worried that voting against the bill could result in its defeat.

Having no law governing assisted dying would be worse than C-14, said Conservative Sen. Don Plett, sounding on the verge of tears as he told fellow senators, "I will struggle and I will pray" about how to cast his vote.

In the wake of Wednesday's vote, a message will be sent to the Commons informing MPs of the changes senators have made. The government will then introduce a motion accepting or rejecting some or all of the changes, which must be debated and put to a vote in the Commons.

Harder told senators their amendments ought to be "respectfully considered" and "appropriately accommodated," with "some level of engagement" between the two chambers.

However, Liberal backbenchers say they were told earlier Wednesday that the government hopes the back-and-forth procedure between chambers can be wrapped up and the bill formally adopted as early as Tuesday.