Liberal MP Arnold Chan, who has been battling cancer, made an emotional address to MPs on Monday, calling on his colleagues to elevate their behaviour and listen to each other and asking Canadians to cherish their democracy.

Liberal MP Arnold Chan, who has been battling cancer, made an emotional address to MPs on Monday, calling on his colleagues to elevate their behaviour and listen to each other and asking Canadians to cherish their democracy.

During his remarks, Chan said he wasn't sure how many more times he'd have the strength to speak at length.

Afterwards, speaking with reporters on Parliament Hill, Chan said he has every intention of carrying on, but acknowledged he has been worn down of late.

Chan was first elected in a by-election in June 2014. He announced in January 2015 that he would be undergoing treatment for cancer. In March 2016, he announced that the cancer had returned.

"Many of my colleagues know that I've had significant health challenges over a number of years and particularly so over the last few months. And today was just uniquely an opportunity for my parents, who have not had a chance to see me in the House of Commons," Chan told reporters.

"I had some things I wanted to say to them, but this was also an opportunity for me to say some broader things that I wanted to say to my colleagues, to my constituents and to Canadians in general, and that have been on my mind for awhile." 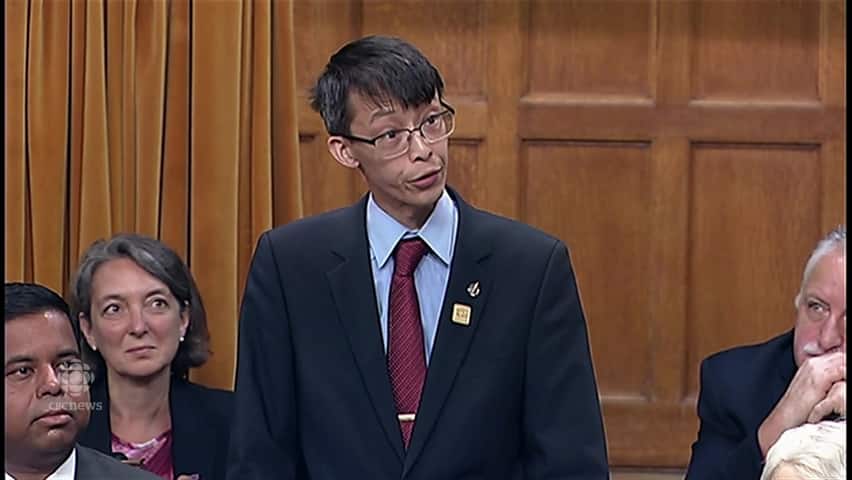 'I would ask all of us to elevate our debate'

The Liberal MP for Scarborough-Agincourt rose during debate on a Conservative motion related to the economy, but quickly made clear that he wanted to speak about other things.

"I have every intention of speaking to the substantive motion before us, but before I do that I have some matters of a personal nature that I have felt in my heart for some time and need to get out, and I am going to simply say them if the House would grant me that dispensation," he said.

That is the challenge that is going on around the world right now. No one is listening. Everyone is just talking at once. We have to listen to each other- Liberal MP Arnold Chan

Chan thanked his constituents and spoke of his family members and the lessons they have taught him. He singled out his wife, Jean, for special thanks.

"As many members know, I have been going through this challenge with my health for the last number of years. I simply could not have asked for a more devoted partner in life as I have walked through this journey," he said, borrowing former prime minister Jean Chrétien's words to his own wife: "'Without you, nothing.'"

Chan said he wanted to talk to MPs about how they "comport" themselves.

"I am not sure how many more times I will have the strength to get up and do a 20-minute speech in this place, but the point I want to impart to all of us is that I know we are all honourable members, I know members revere this place, and I would beg us to not only act as honourable members but to treat this institution honourably," he said.

He praised Green MP Elizabeth May for her commitment to the institution and "respectful tone."

Chan encouraged his fellow MPs to drop their "canned talking points" and listen to each other.

"That is the challenge that is going on around the world right now," he said. "No one is listening. Everyone is just talking at once. We have to listen to each other."

He also asked citizens to value their democracy.

"I would ask Canadians to give heart to their democracy; that they treasure it, revere it," Chan said. "Of course I would ask them in the most basic of things, to cast their ballot, but for me it is much more than that. I ask them for their civic engagement, regardless of what it actually may mean, whether it is going out and coaching a soccer team, whether it is helping someone at a food bank, and for me it can be even something simpler than that...

"It is thanking our Tim Hortons server. It is giving way to someone on the road. It is saying thanks.

"It is the small things that we collectively do, from my perspective, that make a great society, and fundamentally to me that is ultimately what it means to be a Canadian."

Rising to respond, Conservative MP Erin O'Toole, NDP House leader Murray Rankin and Elizabeth May all praised Chan's remarks and his contribution as an MP.

"We refer to each other in the House, by custom, as honourable," O'Toole said. "The member, by the way he has comported himself and added to our debate, truly deserves that title."

Both O'Toole and May thanked Chan for reaching out to them at different points.

Liberal MP Filomena Tassi asked Chan what advice he might offer to MPs.

"My advice is simple," Chan said. "We should use our heads, but follow our hearts. It is as simple as that."