Armenian Canadians call on Ottawa to act on Nagorno-Karabakh conflict

Diaspora fear the current conflict, which they say is fuelled in part by Turkey, will lead to another genocide and are they calling on Canada to take a stronger position supporting the Armenian people.

Diaspora accuse Turkey of fuelling conflict, fear it could lead to another genocide 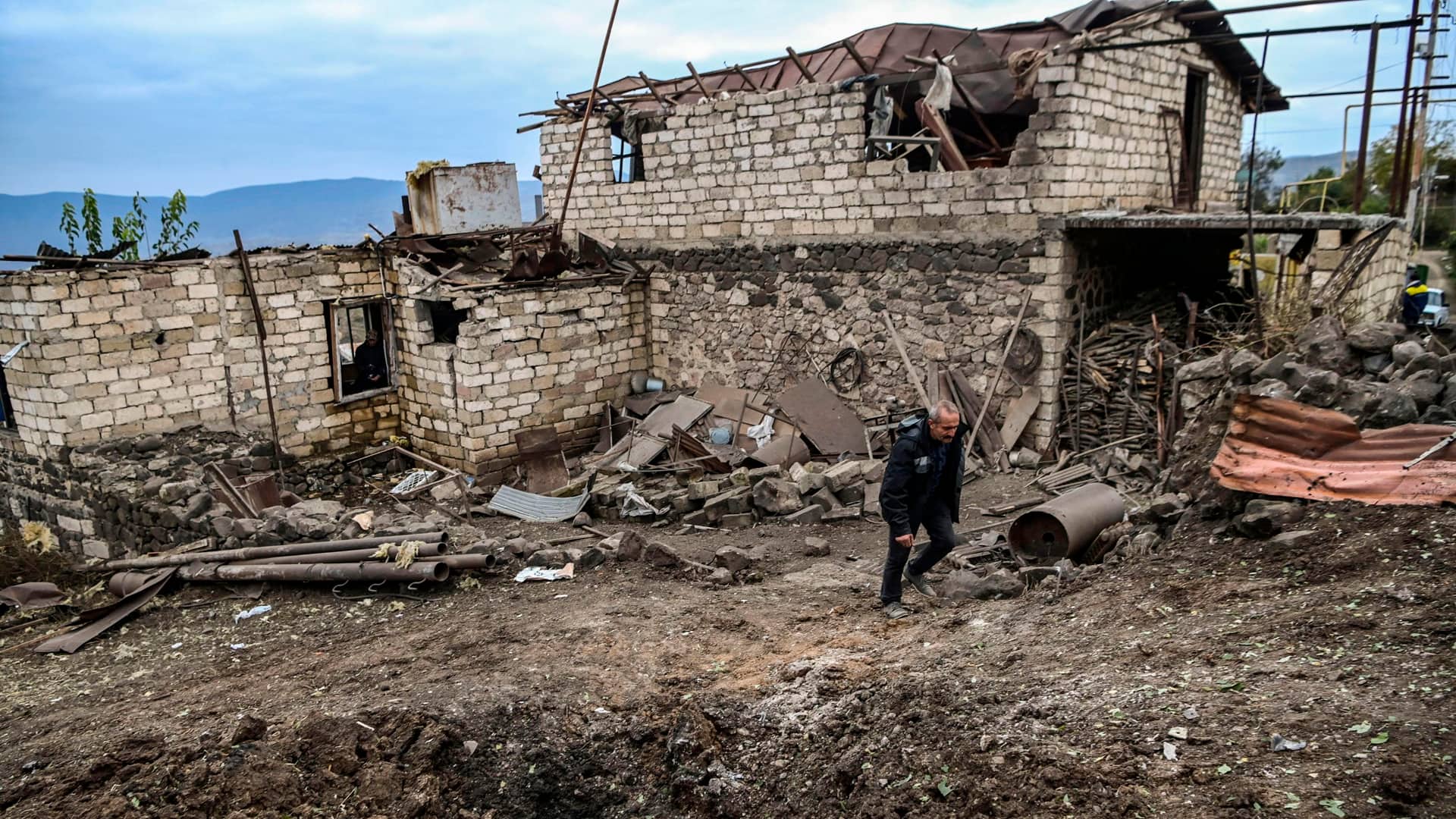 Azerbaijan, Armenia accuse each other of attacks, despite ceasefire

2 months agoVideo
1:36
Despite a Russia-brokered truce on Saturday, Azerbaijan and Armenia are accusing each other of attacking cities overnight. 1:36

The ongoing conflict between Armenia and Azerbaijan is physically and emotionally distant to most Canadians, but for Montrealer Talar Chichmanian, the war is the second time since the 1990s her family has taken up arms.

Her husband left Montreal to join the Armenian forces, who have been battling the Azerbaijani army since Sept. 27 in a war that has left hundreds dead. This is his second war for the same piece of land in the South Caucasus. The previous conflict, which ended in 1994, killed his father, brother and uncle.

Members of the Armenian diaspora are known for being fiercely loyal to their home country, and they remain haunted by the 1915 genocide committed against their people by the Ottoman Empire, or modern-day Turkey.

They fear the current conflict, which they say is fuelled in part by Turkey, will lead to another genocide and are they calling on Canada to take a stronger position supporting the Armenian people.

"Normally, I'm proud to call myself a Canadian, but this past week has been a horrible disappointment," Chichmanian said in a recent interview from Montreal. "I don't want tears on Remembrance Day; I need action today."

Her two children, who are 12 and nine years old, are "terrified," she said. "There's only so much that I can share with them. Their lives are already disrupted by the COVID-19 pandemic. I don't want to stress them out even more."

On Oct. 5, Foreign Affairs Minister Francois-Philippe Champagne said Canada had suspended exports of a drone-targeting sensor, made in Ontario, to Turkey, as it investigates allegations that drones equipped with the sensor have been use by Azeri forces in the ongoing conflict.

Champagne said he spoke Friday to his Turkish counterpart, Mevlut Cavusoglu. "My key message was stay out of the conflict," Champagne told reporters.

'We're descendants of the survivors'

Nearly half of the almost 64,000 people who identified themselves as Armenian in the 2016 Canadian census live in the Montreal area. While Armenians have integrated into Canadian society, Montrealer Taline Zourikian said the community remains tight-knit.

"We don't assimilate," said Zourikian, a psychiatrist who helped organize a protest in Montreal on Thursday. The roughly 50 people who gathered called on the Canadian media to pay more attention to the conflict.

"We're descendants of the survivors of the Armenian Genocide," she said, referring to the slaughter of 1.5 million Armenians in 1915. Canada officially recognized and condemned the genocide in 2004.

🇨🇦&amp; 🇬🇧 reiterate the urgent need to end the military action in &amp; around Nagorno-Karabakh conflict zone. <br><br>We urge all external parties &amp; friends of both states to redouble their efforts in support of an end to hostilities. Civilians must be protected from violence. <a href="https://twitter.com/DominicRaab?ref_src=twsrc%5Etfw">@DominicRaab</a> <a href="https://t.co/Pbk6Og55XB">pic.twitter.com/Pbk6Og55XB</a>

The region at war, called Nagorno-Karabakh, is majority Armenian and has been controlled by the Armenian-backed Republic of Artsakh since 1994. But Artsakh's government is not recognized internationally and the territory is located within Azerbaijan.

Turkey committed genocide against a minority and is now attacking that minority's homeland, he said. The Turkish government, Matthews added, has never recognized the Armenian genocide and has jailed people for bringing it up.

"The final stage of genocide is denial," Matthews said in a recent interview. "By being this aggressive, there's fear that Turkey has ulterior motives in this conflict.

"There's now documented evidence that Turkey has been ferrying religious, extremist fighters from Syria into Azerbaijan to fight Armenian forces," said Matthews, who spent two years in the South Caucasus with the United Nations High Commissioner for Refugees.

The arrival of those fighters is a concern for Lara Aharonian, an Armenian Montrealer who founded the Women's Resource Center, an NGO that operates in Armenia and in Shusha, a city in Nagorno-Karabakh.

"It's a direct threat to women living in border areas and conflict zones," she said in a phone interview from the Armenian capital Yerevan.

Aharonian and her husband, Raffi Niziblian, have been volunteering in Armenia and Nagorno-Karabakh since 1999. Her organization helps women overcome trauma from the previous conflict.

She said she's worried about what will happen to the estimated 75,000 people who have been displaced by the current fighting amid the COVID-19 pandemic.

"There is a generation who has experienced displacement for the second time in their lives," Aharonian said.

Armenia and Azerbaijan agreed to a Russia-brokered ceasefire in Nagorno-Karabakh starting Saturday, but immediately accused each other of derailing the deal.

Minutes after the truce took force, the Armenian military accused Azerbaijan of shelling the area near the town of Kapan in southeastern Armenia, killing one civilian. Azerbaijan's Defence Ministry rejected the Armenian accusations as a "provocation."

Armenian Canadians say the Canadian government needs to do more before it's too late.

Sevag Belian, the executive director of the Armenian National Committee of Canada, said in a phone interview Canada needs to condemn Turkey and Azerbaijan.

"Because if we don't hold the aggressors accountable, they will continue committing their crimes with impunity." he said.