Canada's defence minister presented Justin Trudeau with a gift on Tuesday that took the prime minister back to a visit he made 42 years ago with his father to the northern-most point in Canada.

Canada's defence minister presented Justin Trudeau with a gift on Tuesday that took the prime minister back to a visit he made 42 years ago with his father to the northernmost point in Canada.

The gift was a framed picture of a plaque with the still-legible and barely weathered words:

"This cairn was erected on this spot by the Right Honourable Pierre Elliott Trudeau. P.C., M.P., Prime Minister of Canada and his son Justin during their visit to the High Arctic August 1975."

Justin Trudeau was three years old at the time.

"I remember this trip, we built this cairn," recalled Trudeau, standing in his office with Defence Minister Harjit Sajjan. "It was one of those moments that I'll never forget. It was my first visit to the Arctic."

The plaque was mentioned in a National Defence briefing note CBC News obtained under the federal Access To Information Act, which described how a team of defence scientists stumbled upon the plaque last summer.

"Considering the historical importance of this plaque," reads the briefing note, "it would be commemorative for the Minister of National Defence to present these pictures to the Prime Minister of Canada, the Right Honourable Justin Trudeau."

Increased interest in the Arctic

At the time of the Trudeaus' visit, the High Arctic was taking on increasing significance. Canada's research community was trying to understand the behaviour of Arctic ice after it became clear a few years before that northern waters could be opened to shipping traffic.

The potential commercial interest generated a "boost of activity," said Whitney Lackenbauer, a history professor at the University of Waterloo, who specializes in Arctic sovereignty.

He said the Arctic evolved into a "space and place in need of protection. There was also a rising awareness of Indigenous rights."

Successive prime ministers have taken greater interest in issues such as Canada's sovereignty over the Arctic. Former Conservative prime minister Stephen Harper made regular trips to the North each summer to observe military exercises.

As part of its goal of improving surveillance in the Arctic, National Defence sent its Radar Sensing and Exploitation Team to Ellesmere Island last July. It was during an exercise on July 10 that a member of the team discovered the cairn bearing the Trudeau plaque on a small island called Ward Hunt Island. 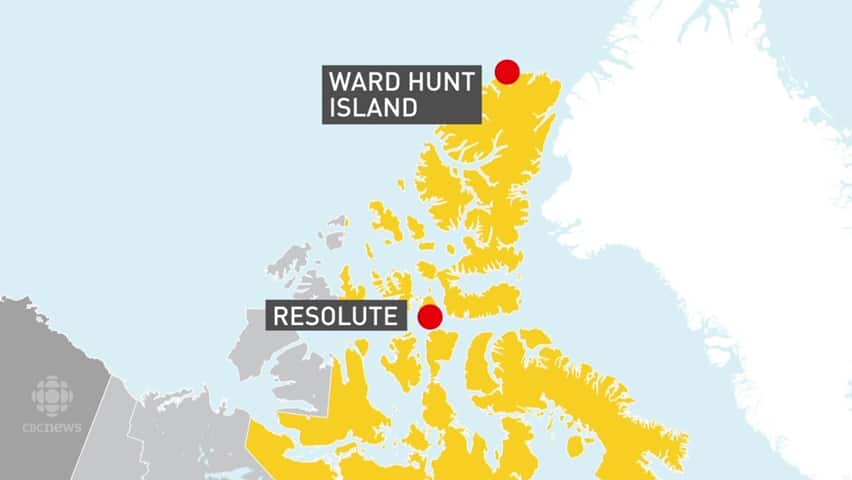 In fact, the island off Ellesmere Island's northern coast is as far north as you can go in Canada. It's an area Lackenbauer describes as a "gateway" for scientists to do their work.

Pierre Trudeau also used the 1975 visit, a private trip that included Justin Trudeau's maternal grandfather, James Sinclair, as an opportunity to do a little diving.

According to a Canadian Press report at the time, the elder Trudeau "put on a diving suit and explored the bottom of the Arctic Ocean for 35 minutes." Trudeau, Sinclair told CP, "did not see any large sea mammals, but got a good look at jellyfish, several types of other fish and a variety of plant life."

It was the kind of excursion typical of the former prime minister, said his biographer, John English. He "had a tremendous interest in the North.

"Canoeing and the frontier were part of his makeup. The Arctic was something he was drawn to from an early time."