Liberal Leader Justin Trudeau says all candidates running for nomination to represent the party in 2015 will have to support its pro-choice position, but that the same rule does not apply to sitting MPs. 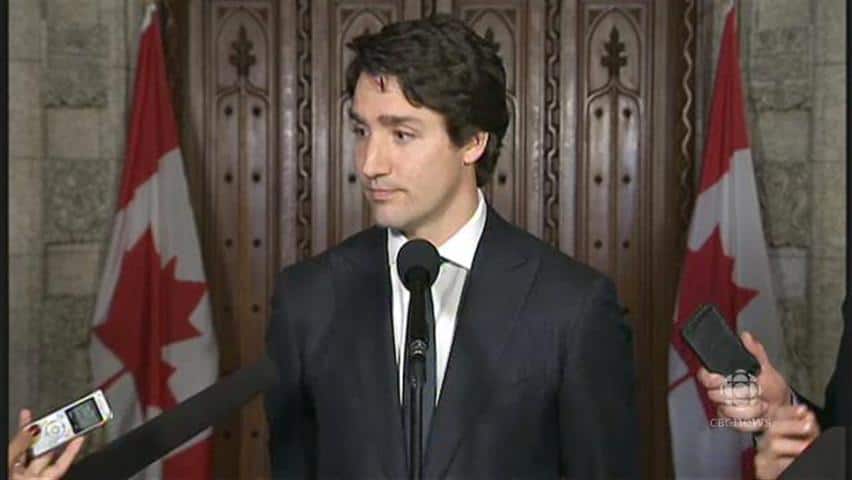 6 years ago
1:36
Liberal Leader Justin Trudeau says any new candidate for the 2015 federal election has to support a woman's right to have an abortion - but the rule doesn't apply to current MPs. 1:36

Liberal Leader Justin Trudeau says all candidates running for nomination to represent the Liberal Party in 2015 will have to support the party's pro-choice position, but that the same rule does not apply to sitting MPs.

"I have made it clear that future candidates need to be completely understanding that they will be expected to vote pro-choice on any bills," Trudeau said Wednesday following his party's weekly caucus meeting in Ottawa.

Trudeau said that rule, however, does not apply to current members of Parliament because they were vetted under a different nomination process.

"The existing MPs ... will be respected to a certain extent in their choices, but our position as a party is we do not reopen that debate," Trudeau told reporters.

The Liberal leader said it is part of the screening process to ask candidates where they stand on a number of issues, ranging from same-sex marriage to abortion.

"We make sure that the people who are stepping forward are consistent with the Liberal Party as it is now, as it stands under my leadership and under the feedback we're getting from Canadians across the country."

Trudeau insisted his party is committed to open nominations, but that does not prevent him from screening candidates.

NDP Leader Tom Mulcair criticized Trudeau's position saying the Liberal leader was compromising his principles by creating a double-standard within his own party.

"I have difficulty seeing how you can have a two-tier system in your caucus," Mulcair told reporters after question period on Wednesday.

"When you make an offer to the public in an election, it's based on principle. It's an ethical question."

Mulcair said that no current or future NDP MP "will ever vote against a woman's right to choose."

I would prefer to have a situation where the party was of a more pluralistic view, but the party's made that choice and the leader reflects that choice.- John McKay, Liberal MP

Liberal MP John McKay, a long-time opponent of abortion, told reporters on Wednesday that it's normal for MPs to have some differences with their parties but conceded that "it creates awkward moments."

"I would prefer to have a situation where the party was of a more pluralistic view, but the party's made that choice and the leader reflects that choice," McKay said.

Trudeau appeared stumped for an answer when he was asked whether he would whip any future votes on abortion.

"It is a tough one," Trudeau said.

"We are steadfast in our belief ... it is not for any government to legislate what a woman chooses to do with her body. And that is the bottom line."

Trudeau, however, went on to note that during his Liberal leadership campaign he said he would whip the vote on issues included in the party's platform, on budget votes and votes of confidence, as well as votes on basic charter rights.

The Liberal leader acknowledged his party does not yet have an official platform.

Kate Purchase, a spokeswoman for the Liberal Party, told CBC News in an email that "people deserve the assurance that if they vote Liberal, they will get an MP that supports a woman's right to choose."

"Current MPs who were elected before Mr. Trudeau became Leader were elected under a different process and we will respect that process," Purchase said.

McKay refused to speculate what he would do if a vote on abortion came up in the future.

"I don't know. I don't know what the circumstances of the vote would be," McKay said.

In an interview with CBC News Network's Power & Politics on Wednesday, McKay told host Evan Solomon he was "surprised" by Trudeau's comments today.

Trudeau's comments came after members of the Campaign Life Coalition held a news conference ahead of the annual March for Life anti-abortion protest​ which will take place on Parliament Hill on Thursday.

The group said it is hoping to draw out anti-abortion candidates from all parties, including the federal New Democrats and Liberals.

It had been expected that Trudeau would discuss his party's motion proposing five changes to fix the Temporary Foreign Worker Program, but he did not.

That motion was defeated 146–129 in the House of Commons late Wednesday.