A day after Scheer unveiled a $6 billion tax cut for most Canadian taxpayers, Scheer is now promising changes to the tax code that would allow parents to claim up to $1,000 per child for expenses related to fitness or sports activities.

Another credit — the children's arts and learning tax credit — would allow parents to claim up to $500 per child for expenses.

The last time this credit was on the books, the Canada Revenue Agency had a broad list of applicable activities. They included anything that develops a creative skill or knowledge of literary, visual or performing arts, music, media, languages, customs or heritage, and wilderness and the environment.

Parents of children with disabilities would receive more from the promised credits. For every child with a disability, the sports credit would be worth $500 more a year, while the arts credit would double to $1,000.

The credits would be refundable, meaning that even if a family owes no taxes to the government at tax time (often the case with low-income families), it can still benefit, Scheer said.

This is the latest Scheer campaign promise resurrecting a policy of the former Conservative government that was dismantled by the Justin Trudeau Liberals after taking office.

The Liberal government dismissed these tax credits — along with the public transit pass credit — as ineffective because they didn't meaningfully change enrolment in sports programs or encourage people to take transit.

Instead, the Liberal government said it would re-deploy money spent on these initiatives to sweeten the Canada Child Benefit (CCB) payment each month.

"These were incredibly popular tax credits. Hundreds of thousands of Canadians appreciated the extra help with paying for kids' activities. That's why they were so disappointed when Justin Trudeau cancelled them," Scheer said.

"And again, it goes back to choices, Justin Trudeau believes that he can spend your money better than you can and that is why he cancelled these very popular tax credits. 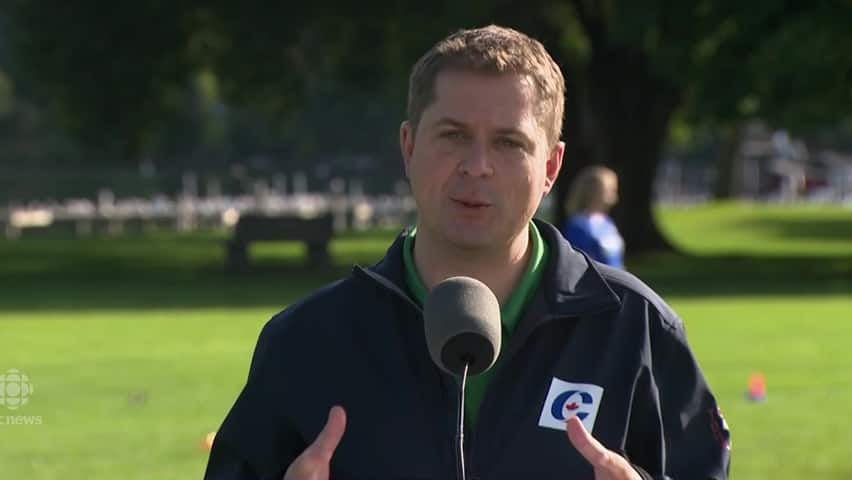 Scheer says he can cut taxes and balance the budget

1 year agoVideo
0:58
Conservative Leader Andrew Scheer says that he can achieve a balanced budget even while lowering taxes by adding a public transit credit, a children’s fitness tax credit and a children’s arts and learning tax credit while also implementing a universal tax cut. 0:58

"We will be bringing them back. We will also have a fully costed platform that shows Canadians how we will get back to balanced budgets while still maintaining increases to important services like health care and education."

Research by the federal Department of Finance prepared for the Liberal government shows that many families never claimed these expenses the last time they were available.

In 2014, 43 per cent of families with children claimed one or both of the credits. The fitness credit was more than twice as popular (41 per cent uptake in 2014) as the arts credit (15 per cent uptake.)

The credits were more popular with middle- and high-income families, while those with a household income below $40,000 were far less likely to participate.

The incentives for low-income families were comparatively small given how little — if any — federal income taxes they pay.

The take-up rate for the tax credits among families with household incomes of more than $200,000 a year income was 73.3 per cent, compared to just 16.8 per cent for families with a household income below $40,000, according to the department figures. Moreover, those higher income households claimed $104 in tax savings, while their low-income counterparts claimed just $14 in savings.

"In the coming days we'll be making further announcements of some philosophical differences that we have with the Liberal party as to how they think they can spend money better than Canadians. We know a dollar left in the pockets of a hard-working Canadian is always better spent than in the pocket of a politician who taxed it. One thing is clear: we will lower the cost of living," he said.

Affordability is the theme of the Conservative campaign. The party's chosen slogan — "It's time for you to get ahead" — has been plastered all over campaign materials and on TV ads airing in regular rotation.

Beyond the sports and arts credits announced today, Scheer has promised to bring back the public transit pass credit, introduce a new non-refundable tax credit for maternity and parental employment insurance (EI) benefits and exempt home heating from the GST. As part of his climate plan, Scheer also promised to revive the home retrofit tax credit so people can renovate their homes to improve energy efficiency.