Scheer said Justin Trudeau has demonstrated "a fundamental unseriousness and misunderstanding" of global issues during his time in power. He also attacked the government's "Canada is back" sloganeering as meaningless.

"Being a good ally and contributor on the world stage requires more than just talk. Both our allies and adversaries respect strength and confidence," Scheer said during a luncheon address to the Montreal Council on Foreign Relations.

"We have seen serious mistakes like this over and over again from this government, and they are almost always attributable to Mr. Trudeau's poor judgment."

The speech repeated many of the attack lines the Conservative Party has directed against Trudeau and the governing Liberals in question period in recent months. It also offered some new details — but few specifics — about what a Tory government would do differently, such as joining a U.S.-led global missile-defense coalition and starting "the necessary work towards moving Canada's embassy to Jerusalem."

Scheer cited the prime minister's Trans-Pacific Partnership negotiating tactics, his much-maligned trip to India — "the most disastrous foreign trip by any Canadian prime minister ever," Scheer said — and mounting tensions with China as evidence that the federal Liberal government has conducted foreign affairs with a focus on "style over substance."

Scheer said Canada should take on a more active role in some of the world's diplomatic hotspots by standing closer to Israel — he reiterated his support for U.S. President Donald Trump's decision to recognize Jerusalem as that country's capital — and advocating for greater freedom for the Iranian people. He also said Canada should treat China more as an economic partner than a strategic ally.

To that end, Scheer branded China — not Russia — as the world's "strongest propagator of authoritarian values," while citing the Asian country's posturing in the Arctic as a threat to Canada's national security.

"I will deal with China with eyes wide open. I will look for ways to strengthen our relationship and open new markets, but with the understanding that at this critical juncture we need to show strength and resolve above all else," he said.

"If this government isn't willing to stand up to China when two Canadians are unlawfully imprisoned and billions of dollars in trade is under attack, it never will. My goal is better relations. My goal is more economic opportunity. But that can only come after we make a stand. And I will."

While strong in tone, Scheer's speech mentioned only three potential policy options to pursue as he looks to challenge China: ending a funding agreement with the China-led Asian Infrastructure Investment Bank that bankrolls projects in the Asia-Pacific region; launching a formal complaint at the World Trade Organization against China over its blockade of Canadian canola products; and placing more restraints on investments by Chinese state-owned enterprises. 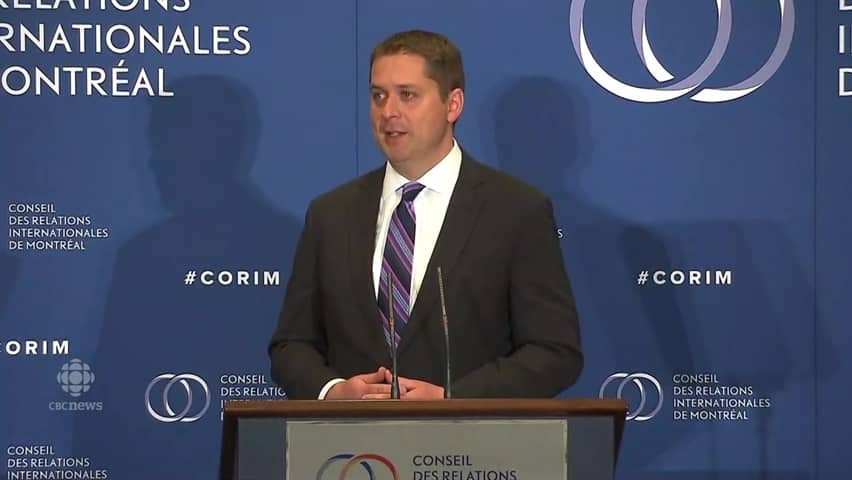 He said Canada has known that China is a bad actor for years, but has too eagerly pursued partnerships with the economic powerhouse without expecting meaningful trade-offs on issues that matter most to Canada, such as the protection of human rights and fairer trade.

"We looked the other way as the allure of China's market was too powerful to ignore. However, so long as China is willing to hold our exports hostage, all while committing human rights violations, we have no choice as Canadians but to consider other trade partners," he said.

"At any rate, Canada's relationship with China needs a total reset. Nothing can happen until such time."

In response to Scheer's speech Tuesday, Liberal MP and Quebec campaign co-chair Pablo Rodriguez said that Scheer cannot be trusted on foreign policy matters because he backed Brexit, the U.K.'s so-far unsuccessful attempt to leave the European Union. Rodriguez accused the Conservative leader of "inexplicably supporting economic chaos" through his support for Brexit and called his foreign policy proposals recklessness and divisive.

"After ten years of failed Conservative foreign policy, Justin Trudeau's Liberal government is restoring Canada's place in the world, including restoring and investing in Canada's military," the Montreal-area MP said. "Canadians don't want to go back to Stephen Harper's failed foreign policy, and that's all Andrew Scheer is offering."

Against the threat of further incursions into the Arctic by China and Russia, Scheer said a Tory government under his leadership would upgrade the Royal Canadian Navy's submarine capability to better protect our national waters.

"Above all, we must establish, without a doubt, everywhere in the world, that our sovereignty over the North is non-negotiable. The Arctic does not only belong to us. It is us," he said.

On Israel and Iran, Scheer said Canada has distanced itself from its greatest partner, the United States.

"The Canada-United States relationship transcends the personalities of those who occupy each respective office. And its longevity is crucial to our respective peace and prosperity. It must be strengthened," he said, vowing to start talks with the U.S. to join the ballistic missile defence program and modernize the NORAD alliance.

Scheer accused the Liberal government of abandoning "Canada's principled support" for Israel when it abstained on a vote at the United Nations that condemned the United States for recognizing Jerusalem as Israel's capital, and by sending Canadian funds to the United Nations Relief and Works Agency for Palestine Refugees, or UNRWA, a group he called "highly flawed."

As the U.S. takes a harder line against Iran by tightening sanctions that have severely damaged that country's economy, Scheer said Canada too must "do all we can to ensure that the people of Iran enjoy the freedoms that we enjoy."

He criticized Canada for repealing its sanctions against the country as part of a peace deal brokered by the administration of former U.S. president Barack Obama.

"I will immediately act to list Iran's Islamic Revolutionary Guard Corps as a terrorist entity, as well as make full use of the Magnitsky Law to punish Iran's worst human rights offenders," Scheer said.

Scheer's proposal comes weeks after the U.S. designated Iran's Revolutionary Guard as a terrorist group — the first ever such classification for an entire division of another nation's government.

Trump defended the move as a way to "significantly expand the scope and scale of our maximum pressure on the Iranian regime."

The Qods force, which is responsible for the group's foreign operations — including the the bombing of the Israeli embassy and a Jewish community centre in Argentina — is already listed in Canada as a designated terrorist organization.

While critical of the Liberal government's successful re-negotiation of NAFTA — he said Canada was forced to accept a "worse deal" because Trudeau was too focused on "photo-ops, sound bites and orchestrated media leaks" — he did not suggest in the speech what exactly the Conservatives would do to change the terms of the trilateral trade deal.

Rodriguez said Scheer offered little during the NAFTA renegotiation process apart from pushing "to capitulate to the Americans to get a deal at any cost."

"And after years of Conservative delay and incompetence on trade, it was Liberals who finally ratified new European and Pacific trade deals," Rodriguez said.