The Conservative Party of Canada has started the post-mortem process on the 2019 election campaign, trying to work out what went wrong in the weeks leading up to Monday's vote.

The Conservative Party of Canada has started the post-mortem process on the 2019 election campaign, trying to work out what went wrong in the weeks leading up to Monday's vote.

In a Facebook live video shot Wednesday afternoon, Conservative Leader Andrew Scheer acknowledged his campaign did not go as well as he'd wanted.

"Obviously, we're disappointed in the results, and we were expecting and hopeful for a lot more Canadians supporting our party, especially in some key areas," Scheer said in response to an online question.

"The work to solve those problems has already started. I've already had meetings with some of the key officials that were responsible for the campaign. We're going to have a thorough review, we're going to go through everything and say, 'Look, we made some great progress, but we need to do better next time.'" 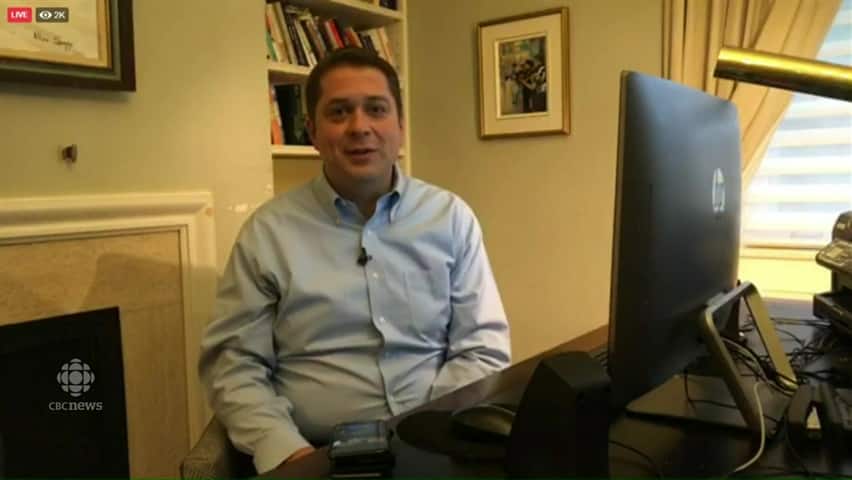 1 year agoVideo
2:17
Opposition Leader Andrew Scheer held a Facebook Live Wednesday afternoon, saying he is disappointed with the results of Monday's election but sees them as a 'first step' in defeating Justin Trudeau. 2:17

While the Conservatives won the popular vote and made overall seat gains, Scheer did not win enough support in Quebec and Ontario to put him over the top.

"It's time to work even harder, pour ourselves into this work over the next few months, and that's exactly what we are going to do," Scheer said.

Scheer's public stay-the-course statements are part of an overall effort to fend off anyone who might be considering challenging his leadership.

Before the election campaign was even over, news reports suggested former Conservative cabinet minister Peter MacKay was being looked at as a possible replacement.

In the wake of the vote, CBC News spoke with multiple Conservative sources on background to gauge the mood of the party, both inside and outside of caucus.

While there is widespread disappointment within the party, the sources CBC News spoke with are generally satisfied that Scheer has done enough to hold on to his job — although some acknowledged he faces serious challenges going forward.

One source said the calls for a change in leadership are coming from "outside the house" and accused impatient Conservatives of trying to "throw bombs into caucus."

"Caucus is going to be solidly behind Andrew," the source predicted.

"At the end of the day, he's probably fine," said a second source, who pointed out the party has invested millions of dollars in promoting Scheer's brand and boosting his name recognition and suggested it would be a waste at this stage for the party to cut its losses and move on.

At the same time, several sources said Scheer's own image turned out to lack appeal for voters in Ontario and Quebec.

A third source said Scheer's past comments about same-sex marriage and his refusal to participate in LGBT pride events were regularly brought up by voters during the campaign.

In the lead-up to the campaign, the Liberals posted online a clip of a 2005 speech Scheer delivered in the House of Commons opposing same-sex marriage.

While Scheer said during the campaign he would defend equal marriage as defined by law, he dodged questions about whether his personal views on the issue have evolved over time.

Another point that repeatedly came up during the campaign was Scheer's personal position on abortion. Again, Scheer said a Conservative government would not reopen this debate, even as he personally described himself as "pro-life."

The third source said there was no way for Conservatives to spin Scheer's position on these social issues, and it cost them.

'The ceiling is getting further away'

"It's not like the country is going to become less pro-choice, or less supportive of same sex marriage," the source said.

If these concerns are not addressed, the source said, Conservatives will struggle to win more support in Ontario and Quebec.

"What this election showed is that the floor is solid, but the ceiling is getting further away."

Scheer and his inner circle are well aware of the scrutiny they will be under during the election post-mortem, according to a fourth source.

"Any smart political operator will be looking at all of the angles. The people around Scheer, and Scheer himself, will take nothing for granted," the source said.

However, the source added that the party doesn't appear to be looking for another leadership race.

The Conservatives CBC News spoke with said Scheer's campaign pitch to Quebec voters was a failure and must be a significant focus of the election campaign review.

Liberal Leader Justin Trudeau, NDP Leader Jagmeet Singh and Bloc Québécois Leader Yves-Francois Blanchet ganged up on Scheer during that debate, hammering away at his positions on social issues and his energy policies.

On top of that, Scheer's struggles with French as his second language were abundantly clear during this performance.

The fourth source said the party also needs to take a close look at how the Conservative appeal to voters in Quebec played in English Canada.

Scheer vowed that a Conservative government would not intervene in the legal challenge against Bill 21 — the Quebec law that bans some public employees from wearing religious symbols while at work — though he said would never introduce anything of that nature at a federal level.

As the Conservatives take a closer look at what happened over the past five weeks, Scheer said he's prepared to hold Prime Minister Trudeau to account.

"The burden is going to be on him to find common ground. It's up to him to reach out to other parties in an attempt to pass legislation," Scheer said in his Facebook video.

"Voters gave him a minority government. We won the most votes. So we will use our position, as the opposition, to stand up for the things Canadians voted for."