U.S. calls off tariffs on Canadian aluminum — for now

The United States has hit the pause button on tariffs on Canadian aluminum, agreeing to withdraw current penalties — at least until after the presidential election in November. The move came as Canada was set to impose retaliatory measures that might have been politically inconvenient for President Donald Trump.

U.S. hit pause on 10 per cent tariff but could re-impose the levy after the November presidential election

The United States hit the pause button on tariffs on Canadian aluminum today, agreeing to withdraw current penalties — at least until after the presidential election in November.

The move came right as Canada was set to impose a wide range of retaliatory measures that would have hit some politically inconvenient targets for President Donald Trump as he seeks re-election.

Ottawa was planning to reveal its targets for retaliation at 3 p.m. ET today. Shortly after noon, however, the U.S. abruptly declared it would drop its recently imposed 10 per cent import tax on Canadian aluminum — and revisit the issue every month.

That doesn't mean the conflict is over. In making the announcement, the U.S. unilaterally set monthly targets for the volume of aluminum imports it will accept from Canada without a tariff.

Those targets set by the U.S. take effect in September. The U.S. said it will monitor export volumes six weeks after the end of every month — which punts the issue to mid-November, right after the Nov. 3 presidential election.

A Washington trade expert who worked in the Obama White House said it appears the Trump administration wanted to postpone a politically risky fight.

According to Canadian officials, the list of retaliatory tariffs Canada was preparing to impose Tuesday would have struck the very Ohio washing-machine plant where Trump announced his levy on cross-border aluminum.

"I think the threat the Canadian government made of retaliation was credible," said Chad Bown, a trade official in the Obama White House and senior fellow at the Peterson Institute for International Economics.

"[It had] the potential to hurt some of President Trump's voters."

The federal government welcomed the U.S. decision — but warned it's still prepared to impose retaliatory measures if necessary.

Responding to the announcement by the U.S. Trade Representative's office that the 10 per cent levy on Canadian aluminum products would be repealed, Deputy Prime Minister and Finance Minister Chrystia Freeland said the move signals that common sense has prevailed.

"The last thing that Canadians and Americans need now in the middle of this pandemic is a trade war," she told a news conference in Ottawa today. 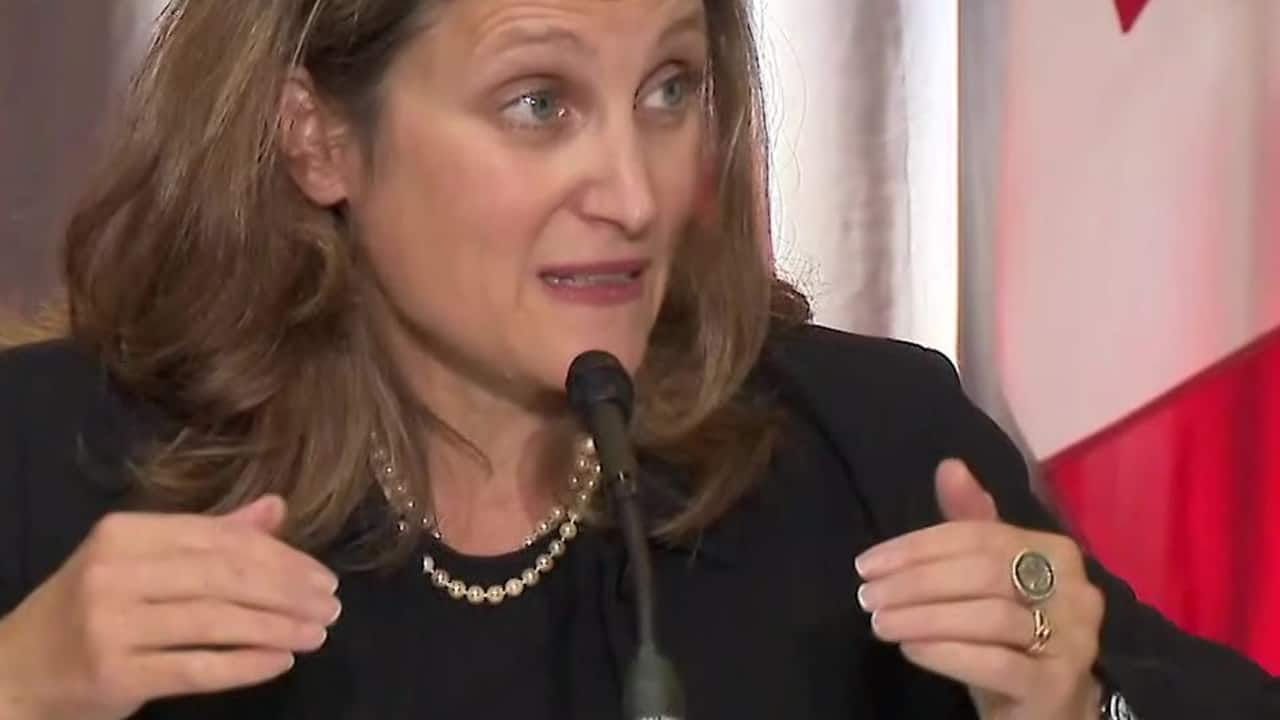 Freeland reacts to US reversal on aluminum tariffs

16 days ago
0:58
Deputy Prime Minister Chrystia Freeland hails the "good news" of the surprise US decision to end tariffs on Canadian aluminum. 0:58

A statement from the USTR said that after consultations with the Canadian government, the U.S. has determined that trade is expected to "normalize" in the last four months of the year, declining after "surges" experienced earlier in the year.

"Accordingly, the United States will modify the terms of the 10 per cent tariff imposed in August on imports of Canadian non-alloyed unwrought aluminum," the statement reads.

The USTR's statement lays out shipment volumes for each of those four months, which will be monitored to ensure they aren't exceeded. If they do, the U.S. expects that imports would decline by a corresponding amount the following month.

Tariffs could be reimposed: USTR

The tariffs could be re-imposed if shipment volumes exceed 105 per cent of the stated volumes, the USTR said.

"The United States will consult with the Canadian government at the end of the year to review the state of the aluminum trade in light of trade patterns during the four-month period and expected market conditions in 2021," the USTR's statement reads.

That's where the potential lies for future conflict.

Since Canada has refused to agree to export quotas on metals, the U.S. unilaterally announced its own limits on imports of a popular type of aluminum, used as a base material for finished products.

Washington's declared limit varies from 70,000 to 83,000 tons per month of non-alloyed, unwrought aluminum. Statistics published by industry, gathered from the U.S. Census Bureau, suggest that could be a source of future tension. 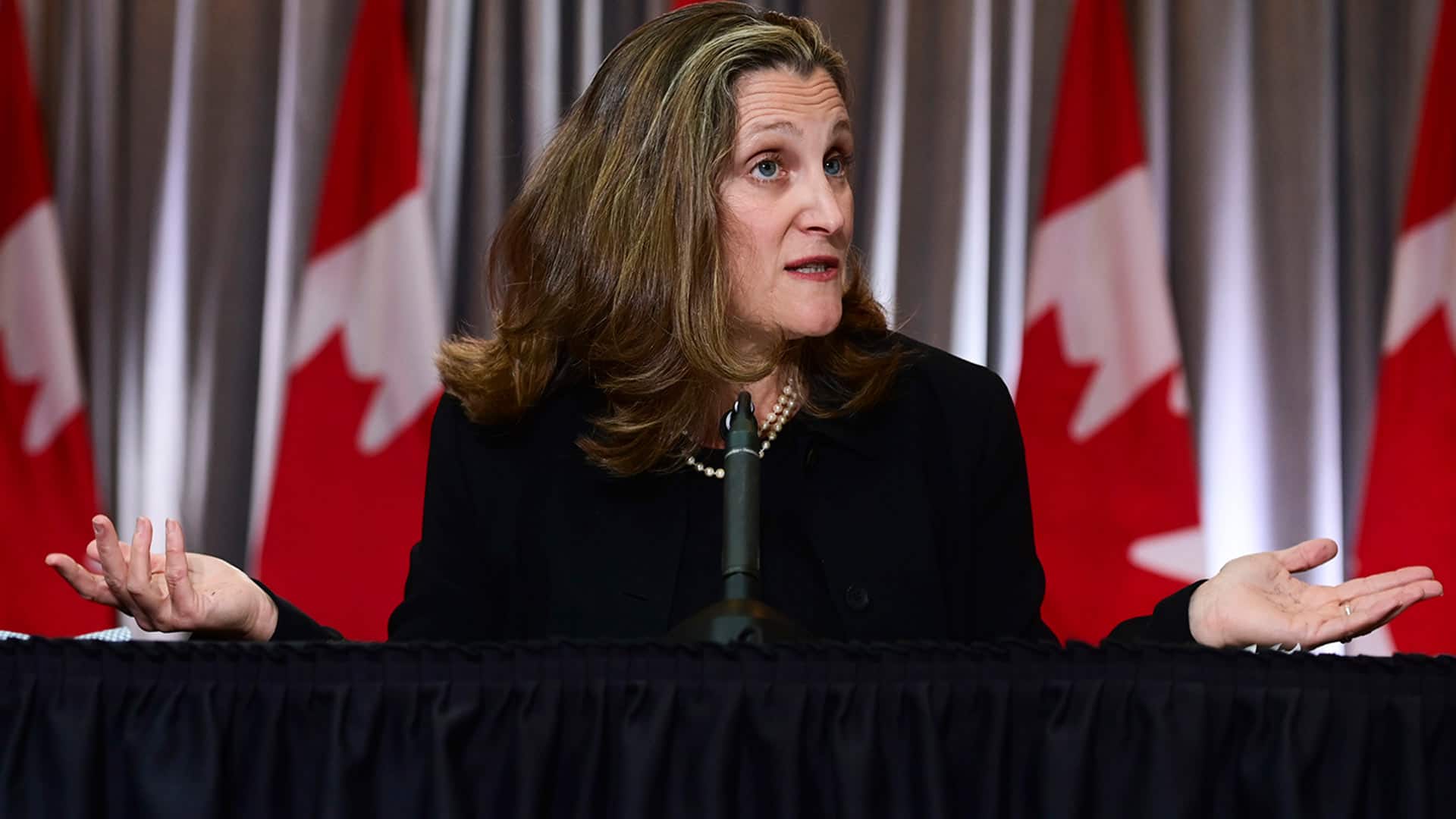 16 days ago
1:57
U.S. President Donald Trump has pulled back the punishing tariffs on Canadian aluminum after Canada made its case that U.S. companies would suffer in states that are key to the election result in November. 1:57

Canada has consistently surpassed that export volume to the U.S. for the past year, and has done so often in previous years.

However, some Canadian officials said they expect that volume to drop naturally, as recent bizarre economic conditions start to stabilize.

Production of this material surged to unusually high levels during the pandemic-driven economic crash. With lower demand for new cars and other products — and given the difficulty of suddenly shutting down an aluminum smelter — producers kept cranking out an unusually high amount of unfinished product.

Freeland stressed that Tuesday's development was not a negotiated agreement with the U.S. and said that the American administration acted "unilaterally." Canada does not accept the imposition of quotas, she said.

"Should tariffs be reimposed, Canada will retaliate with perfectly reciprocal dollar-for-dollar tariffs," she said.

Minister of Small Business, Export Promotion and International Trade Mary Ng said Canada did not concede anything in exchange for the USTR's decision. She credited a collaborative approach with the federal and provincial governments and industry representatives for the positive development today.

"It is a testament to the Team Canada approach, as we all worked relentlessly to ensure these unjustified tariffs on Canadian aluminum were removed," she said.

Business group calls on U.S. to remove threat of tariffs

The Canadian Chamber of Commerce also welcomed today's news but noted that the USTR did not "unconditionally lift tariffs and is trying to restrict market-driven trade flows."

"We call on the United States to fully and without precondition remove the threat that tariffs could be re-imposed in the future," said Mark Agnew, the organization's senior director of international trade.

"This will provide critical certainty for Canadian and American businesses during this period of great economic uncertainty. At a time when our economies are struggling with the economic fallout of COVID-19, these tariffs only exacerbated disruptions to North American supply chains."

In a statement before the second day of a cabinet retreat in Ottawa, Trudeau said the government would act to protect Canada's aluminum industry.

"I want to highlight that we will be taking action to counter the unjust tariffs put on Canadian aluminum by the United States," he said.

"As I've said many times, we will always be there to defend Canadian workers. We will defend our aluminum sector."

The government had said during the summer that unless the U.S. dropped its latest round of aluminum tariffs, Canada would impose $3.6 billion in counter-measures.

NDP Leader Jagmeet Singh said the tariffs and counter-tariffs would hurt workers on both sides of the border because the aluminum sector is so interconnected. He said the government should have done more to convince the Americans not to impose the duties in the first place.

"I think we knew that the president of the United States has done something like this in the past. We should have put in place steps ahead of time and been proactive to prevent this from happening," he said.

"What American manufacturers need now is certainty that these tariffs won't make another reappearance. Setting aside these threats once and for all will allow American job creators to focus on economic recovery," the statement reads.

Trump announced that he would impose the tariffs during a campaign speech at a Whirlpool factory in Ohio, citing national security concerns.

At the time, Freeland responded quickly by stating that Canada "intends to swiftly impose dollar-for-dollar countermeasures" in response.

He urged Ontario residents to "hit 'em where it hurts," noting that the province's consumer base is an economic powerhouse.