Behind the scenes, major airlines are pressing the federal government for an aid package to help them survive the pandemic and quickly recover when countries lift their travel restrictions.

Behind the scenes, major airlines are pressing the federal government for an aid package to help them survive the pandemic and quickly recover when countries finally lift their travel restrictions.

"The carriers are burning through cash," said Mike McNaney, the president of the National Airlines Council of Canada, which represents Air Canada, Air Transat and WestJet.

"The industry will not be able to get out of this challenge unless there's government assistance."

Heading into the pandemic, some of Canada's large airlines were riding a financial high. But COVID-19 brought international travel to a halt, something the sector has never experienced before.

Some airlines stopped flying altogether. Others, such as Air Canada, scaled back operations by more than 90 per cent because of the unprecedented drop in demand.

Thousands of planes now sit parked across the country, costing air carriers tens of millions of dollars daily. And there's no end in sight, said McNaney.

Airlines have been tapping into Canada's wage subsidy program to hire back thousands of laid-off workers, but say they need an infusion of cash, loans and a freeze on taxes and fees to prop up the industry.

A consumer group warns that if a taxpayer bailout is on the way, it should come with strings attached banning airlines from paying executive bonuses and requiring them to reimburse consumers for cancelled flights during the pandemic.

Planes worth $10 billion are parked at airports across Canada, bleeding money, said McNaney. He added he's "astounded" that 90 per cent of the market is gone.

Most airlines finance the purchase of their aircraft, which can cost more than $100 million each. The engines themselves are so expensive that they're sometimes paid off separately, said John McKenna, president of the Air Transportation Association of Canada, which represents carriers like Porter and Sunwing Airlines.

"It's been a catastrophe," said McKenna. "Everyone is hurting. We are a capital intensive industry.

"Planes cost tens or sometimes hundreds of millions of dollars. For them to be profitable they have to be flying all the time. Sitting there, you still have to insure them, maintain them, and you have to pay for them.

"You're not generating any money from them. You're just losing it."

Sunwing's president Mark Williams said some companies are managing their financial losses but won't be able to sustain it for months on end.

"There isn't a sector that's been more impacted by this," said Williams on Thursday at a virtual Canadian Club Toronto event. "We're really looking for liquidity.

"It's not reasonable to expect that any airline in Canada can go on like this for six months without getting some sort of financial support from the government." 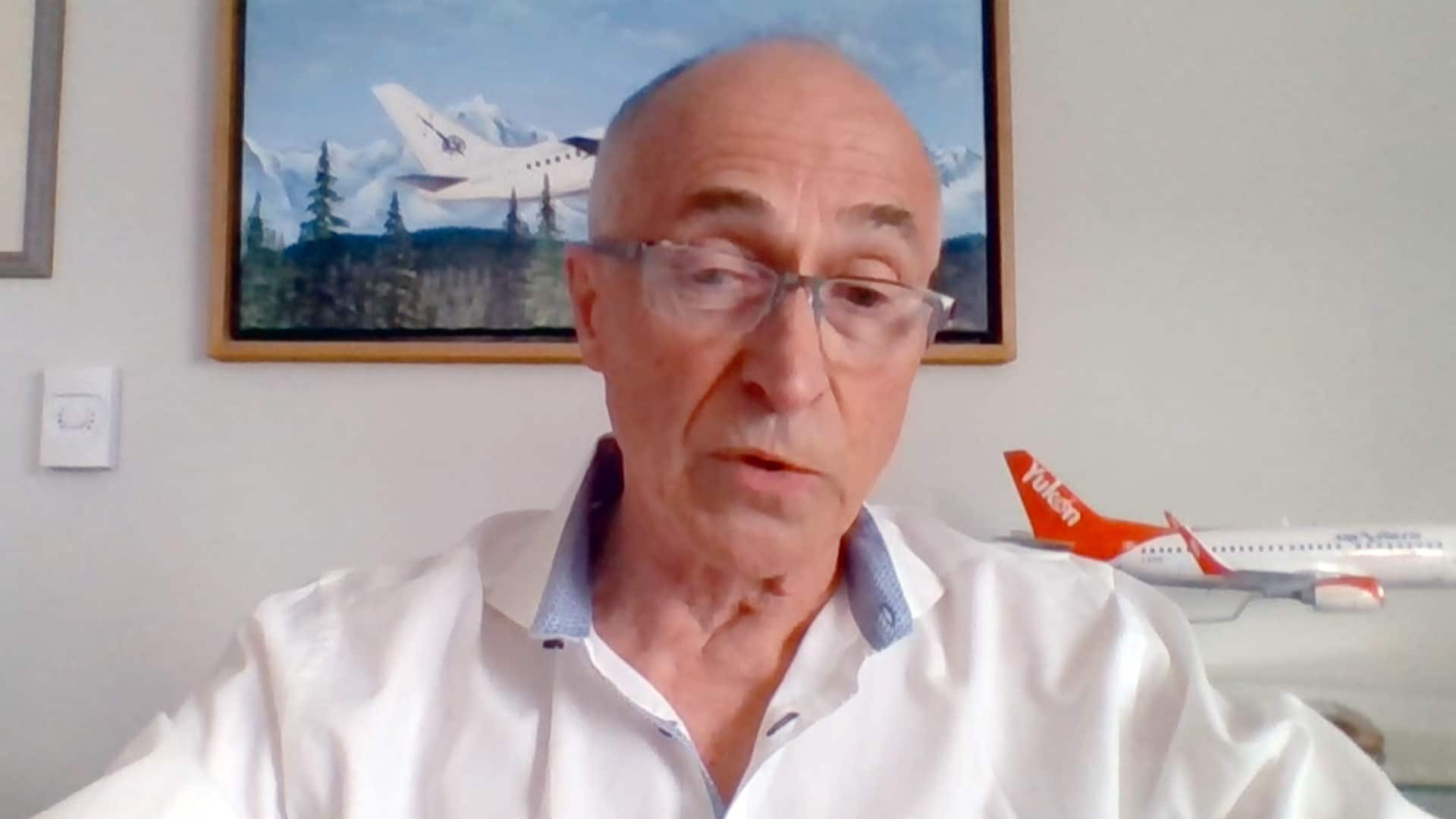 5 months ago
4:37
Joe Sparling, the president of Yukon's Air North, says that COVID-19 has dramatically cut back flights and his company is struggling to meet expenses during the pandemic. He is "confident" they will get through it. 4:37

A vice president at Air Canada recently said he anticipates air travel will resume worldwide by Christmas. But without federal aid, McNaney said, it will be a struggle for airlines to ramp up quickly.

"It's going to be a very complicated process to restart aviation," he said. "We've never seen 90 per cent of capacity parked at one point in time.

"That's like trying to walk out into a parking lot after a [hockey] game with 15,000 cars in the lot and none of them turn over because it's too cold and their engines have all shut down. So you have to get all those cars ramped up and ready to roll. Then you have to find your way out to the parking lot."

McNaney said the government needs to stabilize the airline industry so it can start working out the logistics of re-starting with air carriers, staff and government agencies. The longer they wait, the tougher that process will be, he said.

McNaney added that the airline and tourism industries are key to rebuilding Canada's economy.

A month ago, Prime Minister Justin Trudeau said he recognized the industry has been hit "extremely" hard and that help was on the way.

Morneau's office said the government is still evaluating "all options to support the industry."

"We have been in touch with airlines and we understand the impact COVID-19 is having on their industry and we are with the workers who are facing a difficult situation in these unprecedented times," said spokesperson Maéva Proteau in a statement to CBC News.

Williams said talks continue with the government to come up with an equitable solution so that all companies — big and small — receive help.

"The government shouldn't be picking winners or losers here," he said. "They need to support the industry as a whole."

Some European nations and the U.S. have agreed already to bailouts. France and the Netherlands are providing a 10-billion-euro taxpayer-funded bailout to save Air France-KLM.

The Trump administration agreed to a $25 billion bailout to prop up its airline industry. Canada's industry is roughly one-tenth the size of the American one. Some Canadian pilot and airline associations have told CBC News a $5 billion bailout from the federal government would be reasonable.

But airlines have been hesitant to put a price tag on damage that's still unfolding, and have not offered a number to the federal government.

If Canada does announce a bailout, some argue there should be strict criteria to ensure taxpayer money isn't misused.

John Lawford, executive director of the Public Interest Advocacy Centre, said Ottawa should focus on "making sure companies couldn't skim off excess profits through the bailout by giving dividends to their shareholders with that money, or giving large executive bonuses.

"These sorts of things should be prohibited."

Lawford said the government also should make it mandatory for airlines to use some of the government aid package to reimburse customers for flights cancelled due to the pandemic.

There are two proposed class-against lawsuits against major Canadian airlines seeking full refunds for passengers whose flights were cancelled during the pandemic, according to the consumer group Air Passenger Rights. That same group has also taken the Canadian Transportation Agency to court over the issue.

"It's a large expense for the average consumer," said Lawford. "The $3,000 to $4,000 dollars for a large vacation you've been saving up for multiple years is a large cost for consumers to absorb."

Some analysts have suggested that it could take more than five years for the airline sector to return to the same traffic it saw before COVID-19 hit.