The Assembly of First Nations has signed an agreement with the RCMP to address racism and discrimination within the force as the two sides look for ways to improve relations.

The Assembly of First Nations signed an agreement with the RCMP on Tuesday to address racism and discrimination within the force as the two sides look for new ways to improve relations ahead of the federal government's much-awaited national inquiry into missing and murdered Indigenous women.

"We invited the commissioner back again … to be part of this MOU … about how can we work together to deal with issues, deal with all those misconceptions that are within the police," said National Chief Perry Bellegarde as the AFN kicked off its three-day annual general meeting in Niagara Falls, Ont.

The memorandum of understanding comes just over six months after RCMP Commissioner Bob Paulson openly admitted during the Special Chiefs in Assembly last December there are "racists" inside his police force.

Paulson told First Nations chiefs Tuesday: "I couldn't deny it existed, but I can tell you unequivocally that while it may exist, there is no room, there is no place for it to remain."

Meetings continue Wednesday and Thursday. CBCnews.ca will livestream the proceedings.

Indigenous Affairs Minister Carolyn Bennett told First Nations chiefs the federal government is "very close" to launching a national inquiry into missing and murdered Indigenous women and girls. Bellegarde said it would come later this month, or next month.

A 2014 RCMP report documented nearly 1,200 cases of missing and murdered Indigenous women, a number the families of the victims say an inquiry will show to be much higher.

Bellegarde said an inquiry will force police to answer some difficult questions about its own shortcomings.

Paulson said the RCMP was committed to solving all outstanding cases of missing and murdered Indigenous women and help families still looking for answers. 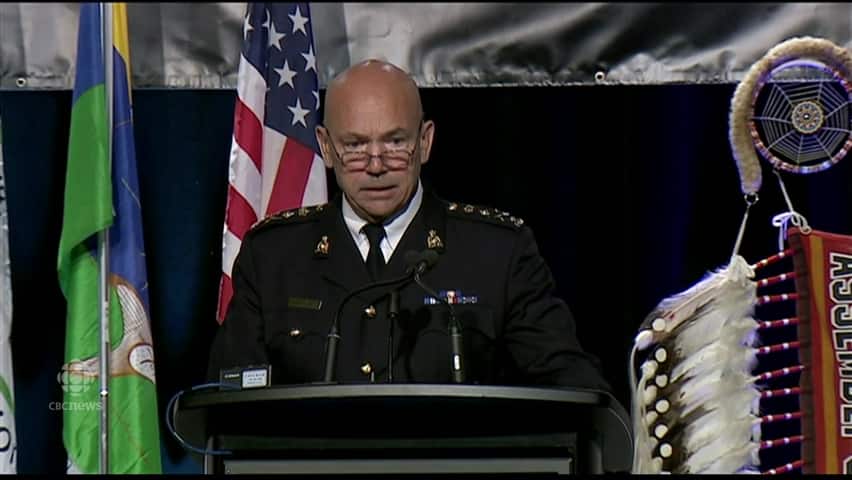 Bellegarde and Paulson on working together

4 years agoVideo
1:58
Bellegarde and Paulson on working together 1:58

"The protocol that we are committing to today promises to build on all of the work we have been doing to be a more respectful organization," Paulson said on Tuesday.

"It also calls on the RCMP to address issues of discrimination that affect our interactions with First Nations communities."

Paulson said while today's agreement is "a very important step" in improving RCMP relations with the AFN and Canada's Indigenous communities, he acknowledged the force would have to do more than just put "words on paper."

"I'm here today to pledge that we will put action to these words, so we can continue the healing, continue the building and improve these vital relationships in every way possible."

Paulson said today's agreement also commits the RCMP to increase beyond eight per cent the current representation of Indigenous peoples within the force.

"While that's a number I think I can be proud of, it just isn't enough," Paulson said adding that "to truly be a culturally competent organization, we must and we will increase that number."

The RCMP commissioner spoke of the impact the work of the Truth and Reconciliation Commission had on him personally and the light it shed on the work required from the RCMP.

"We know reconciliation will require much work on our part, but I need you to help us."

"We need to get to the root of the current inequities by addressing health infrastructure, improving drinking water, investing in programs that support education, including early learning and child care on reserve."

Young people from various First Nations communities across the country, some from as far as 950 kilometres away, walked to the meeting to raise awareness about the challenges they face and to call on all levels of government to take action.

Some walked from the northern Ontario community of Attawapiskat, which has seen multiple cases of youth drug overdoses and suicide attempts since April.

"It's an ugly thing to look into that issue of suicide. It's ugly and it's staring right back at us," said an emotional Patrick Etherington Jr., from the Moose Cree First Nation in Ontario, on behalf of some of the walkers.

"The system has failed us, it failed miserably," said Etherington Jr., who is the son of a residential school survivor. 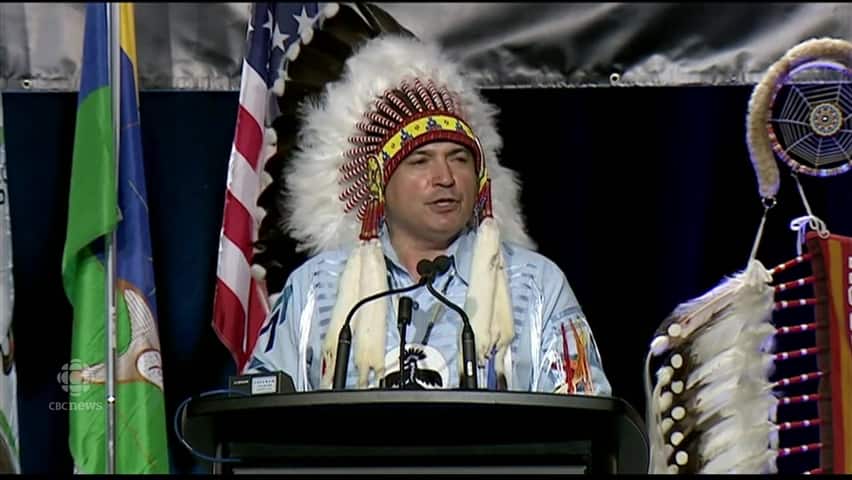 Bellegarde says "We are on the cusp of great change"

In his opening remarks, the national chief for the AFN said while the hard work still lies ahead, Indigenous communities are "gaining momentum" — the theme of this year's general assembly.

"It doesn't mean all of our issues have been solved. But what it does mean is that, for the first time in a very long time, there is reason to believe that we are on the cusp of great change," Bellegarde said.

"But it will take all of us, working together, to make it real for everyone."

Bellegarde said the AFN also signed a memorandum of understanding with the federal government "to create a new fiscal relationship, one based on real needs."

The AFN signed the MOU with Bennett to form a working group to advise the government on how it should move forward with funding for Indigenous communities.

Bennett said the Trudeau government was committed to "removing the irritants from previous years that poisoned the relationship and set back progress by a decade."

Moving beyond the Indian Act

The Indian Act, the primary legislation used by the federal government to administer everything from laws to membership and elections in First Nation communities, was the subject of Justice Minister Jody Wilson-Raybould's remarks to the general assembly on Tuesday.

Wilson-Raybould made the case for moving beyond the Indian Act telling First Nations chiefs it would not be as easy as "ripping" it up.

While the Trudeau government has embraced support for the United Nations Declaration on the Rights of Indigenous Peoples, today Wilson-Raybould said it could not be adopted as it into Canadian law.

"So as much as I would tomorrow like to cast into the fire of history the Indian Act so that Nations can be reborn in its ashes — this is not a practical option. Which is why simplistic approaches, such as adopting the UNDRIP as being Canadian law are unworkable and, respectfully, a political distraction to undertaking the hard work required to actually implement it back home in communities." 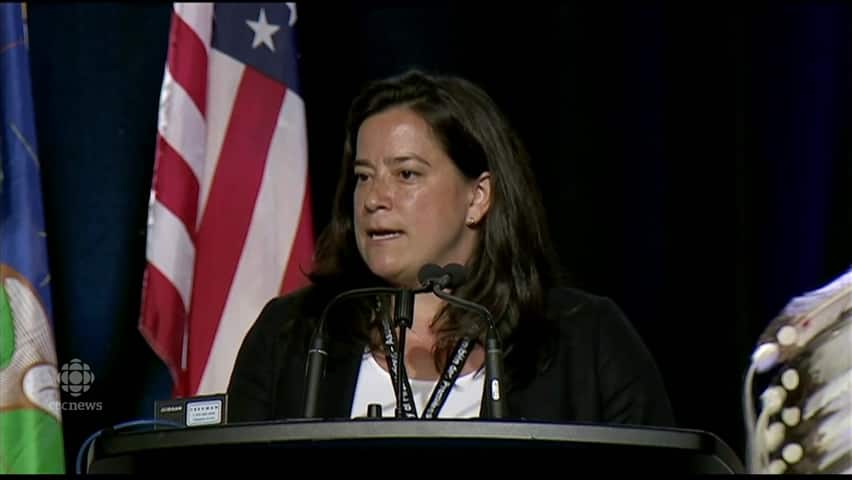 Wilson-Raybould on replacing the Indian Act

"Rather than popping the balloon that is the Indian Act," Canada's attorney general said, it's better to "let the air out slowly."

Wilson-Raybould, who was a regional chief for the AFN before she was elected as an MP in last fall's federal election, said the transition "will be controversial, but absolutely necessary."

First Nations to benefit from Hydro One shares

The AFN general assembly began with Ontario Regional Chief Isadore Day announcing that First Nations communities in Ontario will benefit from the sale of Hydro One shares.

"As of 9 a.m. this morning, the province of Ontario has entered into an agreement in principle will all 133 First Nations communities to sell 15 million shares of Hydro One for our collective benefit," Day said in his opening remarks.

Some eight months ago, Ontario began the biggest sell-off of a Canadian crown corporation in 20 years.​

While Prime Minister Justin Trudeau attended the AFN's Special Chiefs in Assembly meeting, his office told CBC he will not be at the general assembly in Niagara Falls this week.

Bellegrade said he hoped the prime minister would attend one of two AFN meetings each year, noting that the next gathering will take place from Dec. 6-8 in Gatineau, Que.