The Conservative staffer blamed in a leak to the media for fraudulent robocalls in the last federal election campaign says he didn't make the calls and doesn't know who Pierre Poutine is. 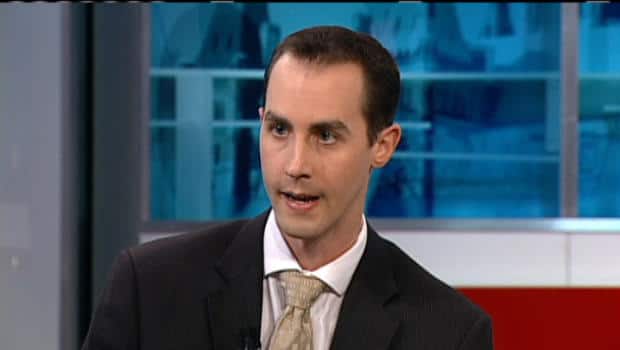 The Conservative staffer blamed in a leak to the media for fraudulent robocalls in the last federal election campaign says he didn't make the calls and doesn't know who did.

Michael Sona, who was in charge of communications for Guelph, Ont., Conservative candidate Marty Burke, told CBC News Network's Power & Politics that he is not Pierre Poutine, the pseudonym used to make the calls — and if he knew who was, he would have told Elections Canada.

The exclusive broadcast interview on Wednesday was a result of co-ordination between CBC News and Radio-Canada's Enquête.

The election agency has been investigating a number of misleading robocalls that directed voters to the wrong polling station in Guelph. There are other investigations going on in 230 ridings across the country where people reported similar calls.

Speaking to Power & Politics host Evan Solomon, Sona said he's not going to take the fall for something he didn't do.

"All the anonymous sources in the world can point the finger at me, but I'm not going to take responsibility for something that I'm not responsible for," Sona said.

"I think that there's some people that maybe had an interest in seeing me take the fall for it."

When the story first broke last February, Sun News reported that an anonymous source pointed the finger at Sona. Sona issued a release a few days later to say that he wasn't behind the calls. He stepped down from a job working for Eve Adams, the parliamentary secretary to the minister of veterans affairs.

Sona said he didn't have access to the lists of voters that Elections Canada believes were used to place the calls. The agency's investigator says in court documents that it appears the party's list of Conservative non-supporters matches the list of numbers auto-dialled with the misleading message.

"You've got to take a look at the options and just say, you know what, what is the more realistic option here? That some then-22-year-old guy managed to co-ordinate this entire massive scheme when he didn't even have access to the data to be able to do this, or the alternative — that this was much more co-ordinated or possibly that there were people that knew how to do this, that it was being done?"

Pressed for more details after his appearance on Power & Politics, Sona pointed to interviews given to Elections Canada by his former Conservative Party colleagues and said the timing was interesting.

"I don't know for sure who it could have been, but I will say this. It's interesting that you had a bunch of people come out and point the finger at me, officially to Elections Canada, only after my name was leaked to the media by anonymous sources."

Court documents show two current Conservative Party staffers gave interviews to Elections Canada, accompanied by party lawyer Arthur Hamilton, reporting comments they said Sona made about untraceable robocalls and "how the Americans do politics." Sona said their accounts aren't accurate and that one staffer got a promotion three weeks after his interview.

Asked why he's speaking out now, Sona said he had been willing to wait out a month or two, but it's been 18 months since the investigation started and eight months since his name was floated.

"Quite frankly, I've realized at this point Elections Canada is not going to clear my name for me. No one else is going to do that. I'm the only person that can do that right now," he said.

A spokesman for the Conservative Party said he would not comment on specifics so as not to compromise the investigation.

"The Conservative Party of Canada ran a clean and ethical campaign and was not involved in voter suppression," Fred DeLorey said in an emailed statement.

"Voter suppression is extremely serious and those responsible should be prosecuted to the full extent of the law.… Our job is to get votes out, we do not engage in voter suppression."

Respect voters too much for tricks

While Sona didn't have access to the party's voter contact database, five other campaign workers did, according to court documents.

Andrew Prescott, one of the workers with access to party's voter database, CIMS, was the campaign's RackNine contact, Sona said. The records show Prescott and Pierre Poutine's user accounts both accessed RackNine the night before the election. The accounts were used four minutes apart from the same IP address.

"He's said to me flat-out that he had nothing to do with it," Sona told Solomon.

"He's not always the best when it comes to security or things like that. I'm not sure if maybe he's left his computer open and someone else could have done something. I'm not sure about the specifics of it."

Prescott, in his first comments on the record, said he wasn't involved in the misleading calls.

"I appreciate the support of friends and family like Mike [Sona], members of the [Conservative] party and members of the opposition, including prominent Liberals, who have reached out to me and who know I was not involved. I respect the voters and democracy far too much to participate in any disgusting dirty tricks like this."

"We were a target seat for a while and there was a lot of direction from headquarters," he said, with people often dropping into the campaign office or offering advice.

CBC also tried to speak to a number of other workers from the national and Guelph campaigns, but they either said to call DeLorey or didn't return calls.

In a statement last February, Byrne hinted that whoever was behind the robocalls acted alone.

"The party was not involved with these calls, and if anyone on a local campaign was involved they will not play a role in a future campaign," Byrne said in a statement.

Sona said that Nick Kouvalis, a strategist with the firm Campaign Research, which does polling and brand management for Conservative politicians, was in the office between eight to 12 times during the campaign. Records show the firm billed Burke's campaign for $6,215 for voter identification services and for a robocall to recruit volunteers.

Kouvalis, however, disputed Sona's assertion, saying on Twitter that he was in the riding one night during the writ period for debate preparation, then once more three nights later to watch the debate.

Sona says Elections Canada investigators have finished their report into the robocalls in Guelph, but the report isn't yet public.

With files from Brigitte Noel and Jeremy McDonald