The federal government is seeking the public's help again in its hunt for people wanted on immigration warrants, focusing on 32 foreign-born fugitives. 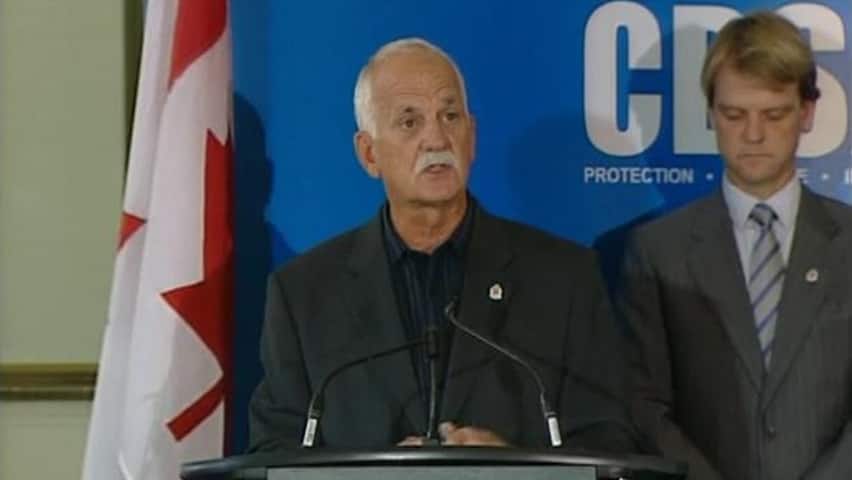 9 years agoVideo
2:24
The federal government is seeking the public's help again in its hunt for people wanted on immigration warrants. 2:24

The federal government is seeking the public's help again in its hunt for people wanted on immigration warrants, focusing on 32 foreign-born fugitives.

"They abused a valued privilege and are no longer welcome in our country," said Public Safety Minister Vic Toews, launching the Canada Border Services Agency's new website to identify non-Canadians convicted of crimes in Canada and subject to removal orders who have since disappeared.

The 32 people on Toews's new list are in addition to 30 suspected of war crimes that he named on July 21, when the Canada Border Services Agency launched a website identifying the suspects and calling for any information that could lead to their whereabouts.

On the first website, the names and photographs of the 30 men are accompanied by a statement that reads: "It has been determined that they violated human or international rights under the Crimes Against Humanity and War Crimes Act or under international law."

Toews said Thursday that eight of the original 30 named on the website now have been found. Six were arrested in Canada and three have been deported, while two more were located outside Canada.

"The success was greater than I'd anticipated," Toews said. He repeatedly thanked the media for its role in motivating the government to create these websites, and praised the public for its assistance.

A telephone tip line was set up to make it easy for the public to share information about individuals hiding from authorities. Portelance said Thursday that some 200 tips had been received about individuals on the first website, proving it to be an effective investigative method for authorities.

The second website launched Thursday is a list of foreign citizens now inadmissable to Canada: permanent residents of Canada who have been convicted of crimes and are therefore subject to removal from Canada for breaching their undertaking as permanent residents by breaking Canadian law.

The Canadian Crime Stoppers Association is supporting the government on this initiative.

All 32 are permanent residents

Toews and Portelance explained that once a permanent resident is convicted of a crime and has served his or her sentence, if the Immigration and Refugee Board does not grant a detention order within 48 hours, the individual may be released on a bond. At this stage in the process, some individuals disappear and cannot be located by the authorities for removal from Canada.

Toews wouldn't fault border officials when asked why the government had lost track of people subject to deportation after being released from prison. Speaking to host Evan Solomon on CBC's Power & Politics, Toews said CBSA and IRB "need to learn to work better together."   "Resources alone won't do it. That's why we need the co-operation of the public.… The strongest supporters of these initiatives that we're taking are from new Canadian communities," Toews said.

The people on the new list were permanent residents of Canada who had arrived legally through the immigration and refugee protection system, many of whom have lived in Canada for decades and may have come to the country as young children.

"Unfortunately these individuals subsequently abused our laws, our generosity and our trust," said Toews.

On this list, the CBSA is targeting individuals convicted of serious crimes like murder, serious sexual assaults, armed robbery and drug trafficking, and those who have received criminal sentences of longer than six months.

"The cases that have been identified here are the ones that we are particularly concerned about," Portelance said. He compared it to a "10 most wanted" list law that enforcement officials may publicize. Portelance said that for these priority removal cases, there are particular reasons to believe the public may be able to help with their investigations.

"It is about putting the interests of law-abiding citizens and permanent residents ahead of criminals," explained the minister, noting that carrying out these removals was essential to maintain the integrity of Canada's immigration system.

This list targets only a few of the estimated 1,400 individuals in the Toronto area, and approximately 2,700 individuals nationally who are currently wanted for removal from Canada.

"They will find no haven on our shores," Toews vowed.