Trudeau's trip to India was a failure and an embarrassment. But if he attempts to make up for it by interfering with the free speech and political activities of peaceful Sikh activists, that would be far, far worse.

It's hard to imagine how Prime Minister Justin Trudeau's India junket could have gone much worse.

Putting aside his eminently mockable clothing choices, the trip was marred from the outset by accusations from Indian authorities that Canada has once again become a safe-haven for radical Sikh extremists. The formal dinner invitation extended (then rescinded) to Jaspal Atwal, who was convicted of trying to assassinate an Indian cabinet minister in 1986, certainly didn't help dispel that notion.

But the allegation that Canada is a refuge for Sikh extremists is belied by the facts on the ground. Babbar Khalsa and the International Sikh Youth Federation — the two primary organs for violent Sikh organizing in the past — have been defunct in Canada for decades. And the last major instance of Khalistani violence in Canada is the still-unsolved murder of journalist Tara Singh Hayer, which took place 20 years ago.

So why are Indian authorities so focused on the issue of Sikh extremism in Canada now?

To understand that, you have to go back to 2014, when many Sikhs in the diaspora began coalescing around a new political movement, called Referendum 2020. The idea is fairly simple: hold a plebiscite of Sikhs throughout the world in 2020 asking if they wish to see an independent Sikh homeland in Northern India. If it passes, Sikh activists plan to take it to the United Nations and press for independence under the self-determination clause of the UN charter.

The 2020 Referendum movement has gained steam throughout Sikh diaspora communities, and especially amongst a vocal segment of Sikh Canadians, who have provided much of its operational muscle.

This renewed focus has helped fuel a surge in Sikh organizing in Canada, including pushing for legislatures to recognize the 1984 Delhi pogrom as a genocide, which succeeded in Ontario last year.

But tensions came to a head last November when the Punjab police arrested Jagtar Singh Johal, a 31-year-old Scottish national and Sikh activist who came to India for his wedding.

They accuse Johal, who has been held without charges since his arrest, of orchestrating a series of assassinations of Hindu and Christian leaders that have rocked Punjab over the last two years. But many diaspora Sikhs view him as a political prisoner being held on spurious charges and accuse the Punjab police of torturing him.

The #FreeJaggiNow campaign has become a cause célèbre throughout the Sikh world and led to a widespread ban on Indian officials entering gurdwaras in Canada, the U.S. and the UK. All together, this has meant that tensions between India and the Sikh diaspora are worse than they have been for decades.

But the differences between the Khalistani extremism of the 1980s and the push for greater Sikh autonomy today are vast.

The Referendum 2020 campaign is largely peaceful. And while a small minority of Sikhs may still venerate terrorists like Air India mastermind Talwinder Singh Parmar as freedom fighters, the vast majority abhor that sort of violence and want nothing to do with it.

The Indian government still finds it impossible to view criticism of its treatment of Sikhs as anything but evidence of a resurgent extremism.

"Radicals have taken over most gurudwaras in Canada, the U.S. and the UK, and organise events where the themes of Khalistan and persecution of Sikhs in 1984 are a running refrain," a Indian senior police officer told The Outlook, an Indian publication.

They do have some legitimate worries that even peaceful separatist organizing will break apart the fragile political consensus that has existed in Punjab in recent years. The assassinations of nine Hindu, Christian and non-orthodox Sikh leaders over the last two years are evidence for that.

But that peace is fragile for a reason. Those responsible for state-orchestrated atrocities — like the 1984 Delhi pogrom or the mass killings and secret cremations of tens of thousands of Sikh youth — have never been brought to justice. And until that happens, there will be Sikhs in the diaspora and in India who will feel it's necessary to push for greater autonomy and even an independent Sikh homeland. 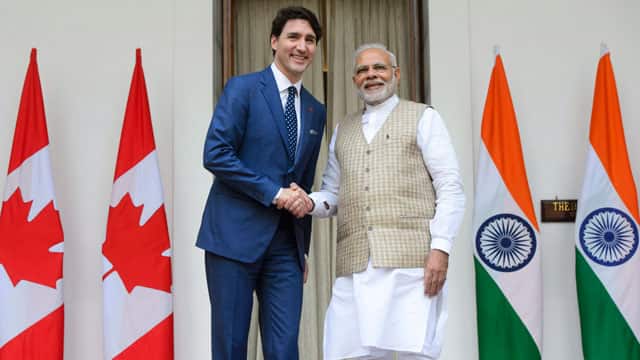 3 years ago
1:56
Prime Minister Justin Trudeau finally met with India's prime minister Narendra Modi. It was a welcome moment for Trudeau, whose trip to India has been filled with controversy. Both Trudeau and Modi say they boost cooperation to fight terrorism and extremism. However, the invite of a convicted terrorist to an event with Trudeau did not come up in their talks 1:56

When Trudeau decided to embark on his foreign adventure, this is the morass that he walked into. The Indians see his government, which relies on Sikh voters and includes four Sikhs in cabinet, as negligent, or even sympathetic, when it comes to Sikh separatism. And his appearances at Khalsa Day events, which sometimes include a small number of posters commemorating violent militants like Jarnail Singh Bhindranwale, are reported on feverishly by the Indian press, further feeding into that impression.

Behind closed doors, Indian authorities surely pushed Trudeau to crack down on this kind of Sikh organizing within Canada. But that would be the wrong approach.

In recent years, a new generation of Canadian Sikh leaders have come of age; those who favour peaceful organizing and a human rights approach, sidelining the extremist Khalistanis of the past. If the Canadian government interferes with their free speech and political activities — or opts now to ignore their voices in an attempt to correct for the wrongs committed on this trip — it only risks empowering those who believe in violence.

The relationship between India and Canadian Sikhs has indeed become poisonous. But only if the Indian state holds itself accountable for its past crimes can that poison finally be leached. Trudeau's trip to India was a failure and an embarrassment. But if he sells out Canadian values in an attempt to make up for it, that would be far, far worse.

Arshy Mann is the news reporter at Xtra, where he writes about LGBT issues.