Sooner or later, the bill will arrive for Trudeau's spending: Neil Macdonald

Government finances are pretty simple: If the government spends more than it takes in, it either has to borrow the difference or raise taxes. Canada is already on that path.

Setting aside the strange, faith-based alchemy of money-printing, government finances are pretty simple: if the government spends more than it takes in, it either has to borrow the difference or raise taxes. Eventually, enough spending and borrowing will force it to raise taxes.

And that is where Justin Trudeau's government is heading.

His ministers, most of whom seem to have attended advanced courses on how to say nothing cheerfully, are doing it cheerfully, and saying nothing.

Last week, it was: la, la, la, we're going to spend $62 billion on warships and warplanes and military stuff over the next 20 years. We don't know where the money's going to come from, but don't worry, because, you know, debt as a percentage of GDP and helping the middle class and everyone who wants to join it, and respect and diversity and Canadian values… 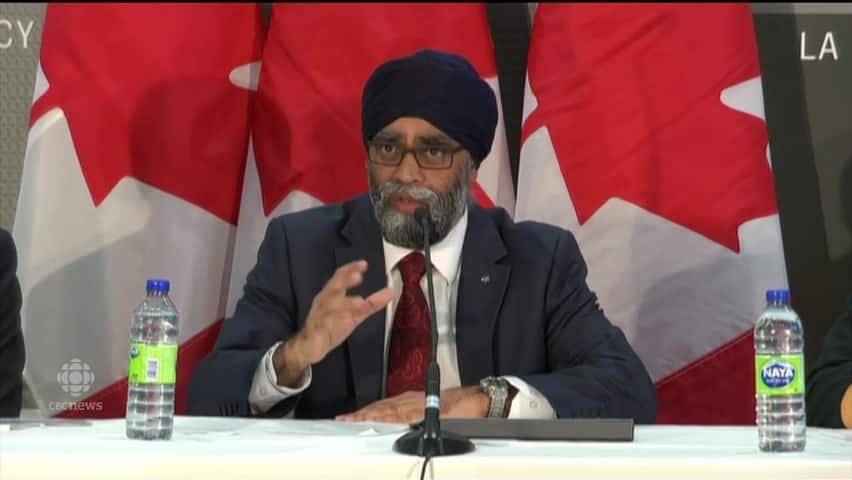 4 years agoVideo
2:00
Minister of National Defence Harjit Sajjan outlines the new Defence Policy and commits to funding over the next two decades. 2:00

Last year, it was: la, la, la, we're going to spend tens of billions on infrastructure, but don't worry, because we're going to "partner" with the private sector, which wants to help us all become better Canadians by helping one another be better…

The fact is, the prime minister who was only reluctantly persuaded, according to campaign insiders, to allow for "modest" deficits – say, of $10 billion per year or so  — in his 2015 campaign platform is planning to overspend by nearly $30 billion this fiscal year.

According to a recent study by the Fraser Institute, Trudeau is close to surpassing Canada's all-time per-capita spending record: $8,337 per person in 2017-18. The record, $8,375, was set by Stephen Harper in 2009-10, when governments worldwide were spending desperately to contain a global recession.

But Trudeau, the study's authors have dryly noted, is doing it "without any recession or large-scale military conflict, which are the two main characteristics of almost every other previous spike in federal spending."

He's doing it by loading up on debt, piling tens of billions onto what Harper incurred post-meltdown.

"Not enough people are talking about it," says Kevin Page, Canada's former parliamentary budget officer, now head of the Institute for Fiscal Studies and Democracy at the University of Ottawa. "We don't have any constraints. Or real deficit targets. Or spending controls. It's all very loose, like my weekend golf swing. Kind of all over the place."

Page's institute has been studying the fiscal sustainability of Ottawa's finances, which is a jargon-ish term for how much discipline the government is exercising.

The answer appears to be not much.

"Our fiscal analysis is among the weakest in the G7," says Page.

When, for example, the government launched last week's big military spending plan, Page says it effectively added half a percentage point to GDP going out over 10 years.

"That fundamentally changes the fiscal sustainability of the federal government. And yet our fiscal analysis is almost nonexistent."

For the time being, the debt generated by the new spending (the government always calls it "investment," never spending) is masked by interest rates which, to those of us older than 20, are surreally low.

Right now, the government is paying about nine cents on every dollar of revenue to service its debt. Back in the early '90s, around the time Paul Martin took over as finance minister, it was more like 38 cents, severely limiting the government's ability to do much more than the basics.

Nonetheless, debt is debt, and in absolute terms, it is increasing, and the laws of economics suggest that sooner or later, interest rates will rise, and that will send a shock into the entire system, one neither our governments nor millions of individual Canadians are prepared for.

Homebuyers in Toronto and Vancouver — and to a somewhat lesser extent, in several other cities — have taken on ridiculous levels of personal debt. Banks, ratings agencies and even the OECD have issued warnings about that. Even more significantly, so has the Bank of Canada, which is responsible for safeguarding our currency and economic stability.

All these organizations know what will happen if interest rates spike: highly indebted homeowners will begin losing their homes. Their debt will collectively slam into the Canada Mortgage and Housing Corporation, which insures people without much equity.

That will strain the government, which will itself be coping with the rising cost of interest on its own debt and falling revenues because of job losses in the housing industry and its satellites.

At that point, there will only be two options for the prime minister: austerity or tax increases, and we've all seen how well austerity worked in Europe.

As the Fraser Institute study noted, there is at the moment no recession, or war, or any other catastrophic event.

John Maynard Keynes posited that in times like these, governments should exercise thrift and discipline, precisely in order to be in a position to spend heavily when a crisis arrives.

Instead, Canada is on the same path it followed after John Turner's budget surplus back in the early '70s: overspending – sorry, over-investing — in good times and bad, taking on ever more debt.

It is not a question of whether the bill will arrive, only when.