Yes, the cancellation was ultimately a business decision. But activists were successful in preventing Energy East from being built back when it was still economically and politically feasible.

Yes, the cancellation was a business decision. But thousands of activists were instrumental in its delay

In the wake of TransCanada's announcement that it will no longer be pursuing Energy East, a familiar chorus of politicians have emerged to blame various actors for the pipeline's demise.

Conservative MPs and premiers pointed to Prime Minister Justin Trudeau. Leadership hopefuls for Alberta's United Conservative Party framed it as a direct failure of Premier Rachel Notley. And federal Liberals explained it vaguely as a "business decision" based on "market conditions."

This blame game, however, has largely ignored the significant role social movements played in derailing the pipeline. Indeed, thousands of concerned citizens have been working to change the discourse and timelines surrounding this project since it was first floated back in 2012.

The pipeline was originally scheduled to be approved by the end of 2014 and in operation by the end of 2018. Instead, delays won by Indigenous communities, grassroots groups, labour unions and NGOs prevented Energy East from being built when it was still economically and politically feasible, back when the price of oil was well north of $80 per barrel.

These delays also created space for Energy East opponents to carve out new expectations of the environmental and social burdens of proof needed for an energy project's approval, making it even harder to build.

Two events in particular each drove about two years of delay. First, there was the September 2014 grassroots-funded legal challenge on risks to beluga whales at the project's proposed Cacouna Marine terminal, which triggered a long process of TransCanada trying and failing to find a new Quebec location acceptable to the public.

And second, there was the Charest Affair, where an apparent conflict of interest called into question the overall validity – and legality – of the National Energy Board's hearing on Energy East, causing delays.

But neither Cacouna nor Charest would have translated into long-term suspensions if not for the public's ability to run with them. As with Standing Rock and Northern Gateway before it, Indigenous communities led this charge.

The Assembly of First Nations of Quebec and Labrador, the Iroquois Caucus, the Assembly of Manitoba Chiefs, the Grand Chief of Treaty 3 and the Kanehsatà:ke Mohawks — alongside many individual nations and Indigenous activists — opposed the project with everything from lawsuits, to speaking tours to direct action.

It is this groundswell of opposition that created the political space for policy-oriented opponents to Energy East to successfully advocate for a review of the National Energy Board's approval process, and for new interim measures to be applied to Energy East. Among them was the consideration of the climate change impacts of the project — something that, ideally, would be a given for an environmental review of a fossil fuel project.

The pipeline's new review, if it had been restarted, would have been the first to include consideration of greenhouse gas emissions both up- and down-stream from the project. These added requirements, in combination with the dour economic outlook for bitumen export and the risks of direct action during construction, mean Energy East has become impossible to build. So yes, the cancellation of Energy East was a business decision, but it was one made in a landscape that's been successfully engineered by social movements. 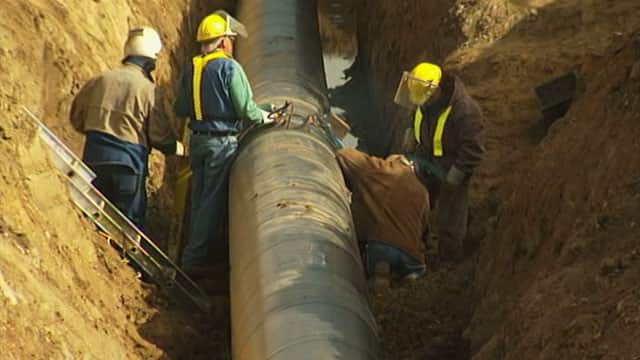 3 years agoVideo
2:11
Renee Filippone reports on the cancellation of the Energy East project by TransCanada 2:11

For those concerned about the risks to the 2973 waterways Energy East would cross, the rights of the 180 Indigenous nations whose territories it would impact, the greenhouse gas emissions equivalent to 21 million cars it would facilitate and the lack of demand for new oil sands export capacity, the death of Energy East is something to be feted.

But be sure to ground your touchdown dance or celebratory round of kombucha in the recognition that this was one of the easier fossil fuel mega-projects to stop. Of the oil sands pipeline proposals made in the last decade, Energy East has always had the most questionable economic prospects and held the most risk for the Quebec-dependent Liberal government.

Bigger challenges lie ahead in stopping already-approved pipelines such as Kinder Morgan's Trans Mountain pipeline and Enbridge's Line 3, new upstream fossil fuel projects like Teck's Frontier oil sands mine, and in pushing for the bold and equitable solutions needed to get to a zero-carbon society. Before we get back to work, let's be sure to stake out Energy East as a victory for collective action, lest Trudeau, Notley or low oil prices get all the credit.

Bronwen Tucker is a community organizer and climate policy researcher. She is currently investigating the impacts of anti-pipeline campaigns as a graduate student at the University of Oxford.