Liberals will get to the bottom of the SNC-Lavalin affair — once the Liberals get out of the way: Robyn Urback

Ever since Trudeau's unambiguous denial of a question that wasn’t asked, the government’s line on the matter has been consistent and clear: We would like to tell you more, but we simply can’t, because we are choosing not to.

The question at the centre of this saga is whether former attorney general Jody Wilson-Raybould was pressured by anyone in the Prime Minister's Office (PMO) to seek a deferred prosecution agreement in the criminal case involving Quebec engineering giant SNC-Lavalin.

Prime Minister Justin Trudeau has been unequivocal in his answer. It's just that he's been answering a different question: No one directed her to secure a particular resolution.

But did anyone pressure her?

No one "directed" her.

Don't be confused. Ever since that unambiguous denial of a question that wasn't asked, the government's line on the matter has been consistent and clear: We would like to tell you more, but we simply can't, because we are choosing not to.

Last week, the Liberal majority on the Commons justice committee blocked efforts to call relevant witnesses — including Wilson-Raybould and PMO senior advisers Gerald Butts (who resigned Monday) and Mathieu Bouchard — before the committee. Expanding the witness list to those who were actually involved in the pertinent conversations would be akin to a "witch hunt" and a "fishing expedition," explained Liberal MP Randy Boissonnault.

Instead, the committee would be calling legal experts, civil servants and the current attorney general, David Lametti, who had already said he has no direct knowledge of conversations between Wilson-Raybould and the PMO. The committee has not called anyone who can speak to the colour of the paint on the wall where these conversations took place, but alas, there is still time to add more witnesses. (Indeed, the committee eventually relented to calling Wilson-Raybould to testify after all.) 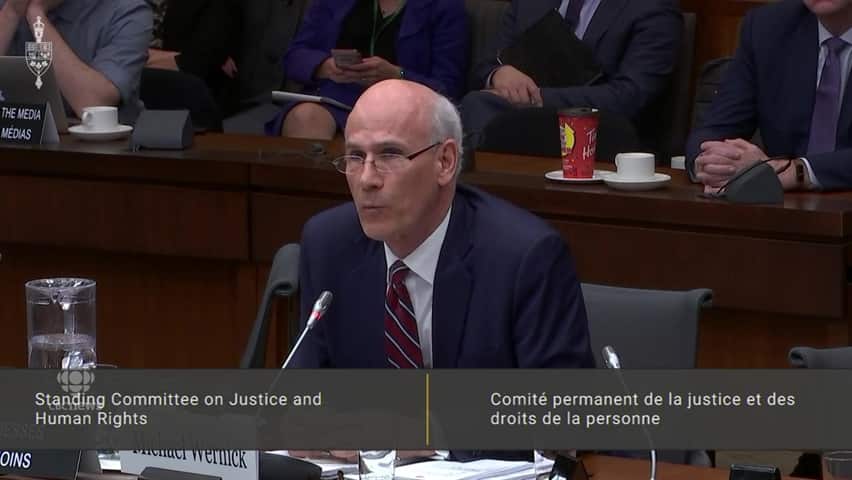 2 years ago
0:27
Michael Wernick the Clerk of the Privy Council spoke to the Commons Justice committee Thursday 0:27

Proceedings began on Thursday, when Privy Council Clerk Michael Wernick testified that the conversations with Wilson-Raybould about SNC-Lavalin were lawful and appropriate. He repeated the prime minister's line that if she felt pressure — due to the multiple conversations in which it was emphasized that the wrong decision on the matter could have dire economic consequences in Quebec — she should have reported it to the ethics commissioner.

Wilson-Raybould has not been able to publicly give her side of the story because, as she has noted previously, she is bound by solicitor-client privilege. The prime minister can waive that privilege should he choose, but he has not for a reason he has not coherently articulated other than to say he is discussing the matter with the current attorney general. During his testimony Thursday, Lametti was tight-lipped about his efforts on the matter, saying he himself is bound by solicitor-client privilege.

Now, the Liberals have been clear that they want to get to the bottom of this. It's just that all of the ways that have been proposed are not the correct ways to do so. They include a motion tabled by NDP ethics critic Charlie Angus calling for a public inquiry on the matter and for the prime minister to waive privilege to allow Wilson-Raybould to speak. All but two Liberals voted against the motion Wednesday.

Earlier that day, Wilson-Raybould reportedly told cabinet, according to a Globe and Mail source, that she experienced inappropriate pressure from the PMO on SNC-Lavalin. Meaning that, within the span of a few hours, cabinet reportedly heard from Wilson-Raybould that she was improperly pressured, then voted against a motion to allow her to say that publicly.

There are questions the prime minister may answer on the matter that don't involve privilege or require him to speak directly on SNC-Lavalin's criminal case. They include why Wilson-Raybould was moved from the Justice Department to Veterans Affairs even though other ministers maintained their posts during the last cabinet shuffle.

The prime minister has noted there are a "range of factors" that go into any decision to move a minister, but did not elaborate on the particular factors in Wilson-Raybould's case. There is no directive that requires Trudeau to keep this information confidential, but it nevertheless appears he is constrained by the parliamentary convention colloquially known as "I'm Not Telling You Anything Else Because I Don't Want To."

Indeed, if you trust the Liberals' words instead of their actions, it is clear they want to fulfil their promise of transparency; to free up Wilson-Raybould to "speak my truth," as she requested in the House this week; to call upon all the relevant witnesses to testify; to allow a full and thorough public investigation. The problem is, the Liberals keep getting in the way. Alas, what is a Liberal government to do?