The Sixties Scoop tried to extinguish our culture and our spirit. It failed | CBC News Loaded
Opinion

The Sixties Scoop tried to extinguish our culture and our spirit. It failed

The goal of the so-called Sixties Scoop was to reprogram the histories and identities of the country's most vulnerable population. And maybe it worked — for a while. I was once very ashamed of my own people. But in the end, I never forgot who I was or where I came from, writes Christine Cameron.

We lost my sister Cleo decades ago, and I feared she may be forgotten

The CBC podcast Finding Cleo, with host Connie Walker, follows a family's search for Cleo Semaganis Nicotine, who was adopted out of her Saskatchewan First Nations community 44 years ago and sent to live in the U.S. during what became known as the Sixties Scoop. Listen to the latest episode and read an opinion piece below written by Christine Cameron, one of Cleo's five siblings, who has been searching for her sister for decades.

I often call myself Star Child.  A child fallen from the heavens without connection to anyone, any place, memories denied and rewritten on a blank slate.

In casting me away from my people into a non-Indigenous home, the isolation was overwhelming. The silence — deafening.

This silent child became an addicted adult, an isolated adult… a very quiet adult.  Post-traumatic stress disorder, obsessive compulsive disorder, anxiety, depression and addictions are common among Sixties Scoopers, and I have had them all in full force.

The Sixties Scoop refers to the government's legalized trafficking of Canada's Indigenous, Metis and Inuit children across the country, as well as to the United States and the world. From the late 1950s to the 1980s, these children were adopted into non-Indigenous homes on a permanent basis.

There were no alternatives, no support, no recourse and often, no warning for the Indigenous families and communities left behind – just child welfare workers coming en masse to up scoop babies and children. Many kids came from large families and thus, siblings were separated and left to deal in isolation with the aftermath. Children like my sister Cleo, left to mourn not only the separation from home and family, but also from brothers and sisters.

LISTEN to Episode 9: The search for Cleo continues in Pennsylvania: 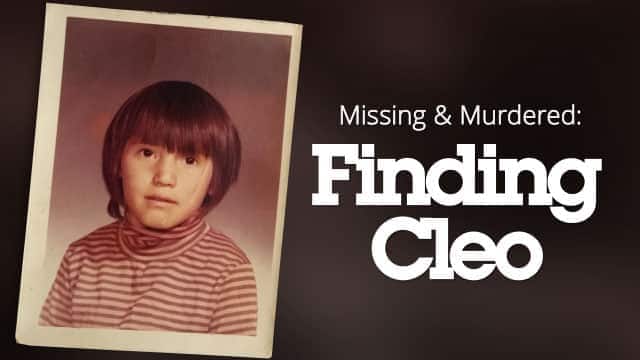 Missing & Murdered: Finding Cleo53:30S2 Episode 9: Reunion
Christine travels to Pennsylvania for an emotional reunion with her brother, Johnny, who she hasn’t seen since she was a baby. Determined to get more answers about the days and weeks leading up to her sister’s death, Christine finally gets a copy of Cleo’s death certificate. That, and other documents begin to shed light on the truth she’s been seeking for decades.

The attitude behind the Sixties Scoop was that "Indians" were unworthy of raising their own children. That others should raise their children for them, and save them from themselves. It was the one of the worst social experiments in Canadian history, along with residential schools and Japanese Canadian internment.

The goal was to reprogram the histories and identities of the country's most vulnerable population. And maybe it worked — for a while. I was once very ashamed of my own people. But in the end, I never forgot who I was or where I came from.

Star Children found each other. We have those relationships now — forged over a lifetime of injustice — to bring equality, equity and fairness to all our people and our entire country, and not just the privileged few who adopted us. We are compassionate and relentless.

We are holding Canada accountable for exclusion, segregation, assimilation, prejudice and racism. Having been raised in a white home, I saw how things worked in society, and how it should work for everyone, but it doesn't. It utterly fails my biological counterparts — the Indigenous people of this country. I see the disparity and it's vast: being labelled as "so-and-so's daughter" opened doors for me that should have been open to everyone. I am a lifetime witness to injustice.

So we combat these injustices with kindness, tenacity and the most precious thing taken from us: volition. The free will to take up the journey to unity and justice for all people.  We are advocates, educators, leaders and warriors.

And even when our own people, in their pain, "out-Indian" us with lateral violence, we understand the intergenerational trauma that created it. Sometimes, we are called "apples" for being red on the outside and white on the inside. It can be an uphill struggle to find acceptance, but we have persevered. We are not diminished in any way.

The spirits kept us all these years, and it is that very relationship that sustains. All these decades, all this time, all this precious, precious, time… has been lost. But everything you took from us, we took back and continue to take it back.

We are silent no more.  We are what you made us, Canada.

We are the new warriors of the Indian Nation, and I for one, will not allow you to forget my sister Cleo or my family, our pain and our struggle, because I know how it should have been for all people. We will be inferior no more.

The Sixties Scoop tried to extinguish our culture, and our spirit. It failed.

The government had no right to do this. It tried to take everything Indigenous from our people. Instead, the Sixties Scoop created the most resilient and relentless advocates this country will ever see: the Star Children.

Christine Cameron is an activist on issues such as the Sixties Scoop, residential schools, MMIW and child welfare. She is an artist and photographer and teaches art, beadwork and regalia-making throughout Northern Ontario. Christine is a mother of four and grandmother of one.