Rona Ambrose was the best leader the Conservatives never had: Robyn Urback

Rona Ambrose has been a moderate voice in the Conservative Party and a powerful one in Parliament. She's sharp, likeable and most certainly capable.

The most attractive characteristic about Rona Ambrose — especially the Rona Ambrose we've seen over the last 18 months as interim leader of the Conservative Party of Canada — is her ability to come off as a normal person.

An unremarkable quality in most of the population, the ability to present one's self in the House of Commons as a sentient being should not be understated. The prime minister's star cabinet ministers, in doing their best impressions of pre-programed drones, are the best perpetual reminders of that.

Ambrose announced this week that she will be walking away from politics, resigning her seat as an MP for the Alberta riding of Sturgeon River-Parkland when the House breaks for recess at the end of June.

Ambrose leaves politics and her party on a rather positive note, with the Tories' fundraising efforts resuscitated, its base generally retained and her own personal approval rating nipping at the heels of her more ostentatious counterpart leading the federal Liberals.

After a near decade-and-a-half in politics, Ambrose's retreat to the private sector is a natural move — at least for now. The party's rules prohibit her from seeking the permanent job as leader (though a group of Tories did try to amend the party's constitution as part of a "Draft Rona" initiative — Ambrose said she wasn't interested), and it's probably wise for her to step away for a while to avoid the shrapnel from the Trudeau Liberals' first attempt at defending their incumbency. 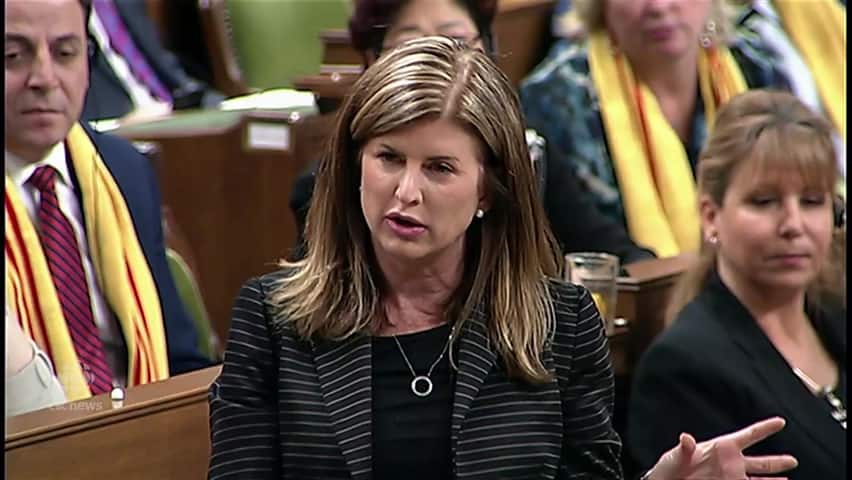 4 years ago
0:47
Opposition Leader Rona Ambrose says the defence minister has a pattern of misleading Canadians 0:47

But for Conservatives looking forlornly at the party's prospects in the near and not-so-near future, Ambrose's absence is a gut-punch. In the day-to-day, she has proven to be a formidable opponent in the House of Commons, vigorously taking the government to task while at the same time maintaining a subtle congeniality. She is fierce without being frothing. That probably explains why she is so well liked in Ottawa, particularly among members of her own party.

It's hard to imagine any of the would-be Conservative leaders filling her shoes in the House of Commons — or eventually, on the campaign trail. Maxime Bernier has bold policy proposals but hardly the personal appeal, which will pose a problem if and when he's made to stand beside Canada's Esquire prime minister.

Andrew Scheer is a smart policy wonk who might just be a bit too reminiscent of Stephen Harper. Kellie Leitch does not come off as a normal person. Lisa Raitt's campaign has been mostly forgettable. Most Canadians don't know the name "Michael Chong."

Ambrose, on the other hand, has the French, the internal support, the personal charisma and a general air of sensibility that could — in a theoretical 2019 contest — leave Justin Trudeau's vulnerabilities exposed. In 2015, the Conservatives presented Harper as the sensible choice — the antidote to Trudeau's unbearable lightness.

Rona Ambrose would, too, be the Conservatives' experienced, sensible offering, but unlike Harper, one who presents as pleasant and easy to chat with — a Conservative who will play beer pong with her young supporters.

In this possible 2019 showdown, Ambrose could call herself a feminist without it sounding like a cheap pick-up line ("Hey girl, wanna form half my cabinet?"), potentially recruiting the young female voters her party desperately needs. She'd come equipped with a resume befitting a prime minister — once serving as Minister of Environment, of Labour, Public Works, Status of Women and of Health — yet without the crushing baggage (relatively speaking) that comes with a long tenure in politics. (How many times will we hear about Bernier's girlfriend if he makes it to the 2019 election?)

Ambrose has been a moderate voice in the Conservative Party and a powerful one in Parliament. She's sharp, likeable and most certainly capable. Arguably, the best permanent leader the CPC never had.