Humour certainly evolves, but the unseemly alliance of comedians, politicians and news media now flourishing flies contrary to the anti-establishment trails blazed by generations of comedians prior.

As late-night host and ostensible comedian Jimmy Kimmel continues to drop searing monologue after monologue on President Donald Trump, the question arises: when did political humour become so, well, political? Kimmel's latest contretemps with President Trump and Republicans — about the shooting at a Florida high school — is but one of many in recent memory. But decline of political humour and satire began well before Trump's improbable run to the White House.

Over the last 15 years, political comedy has morphed from the traditional biting-but-good-natured, to the condescending, self-righteously moralizing and mocking. Far from the dry wit of Johnny Carson, modern late-night comedians "destroying" this, or "eviscerating" that with progressive hot takes makes for bad politics, and even worse comedy. 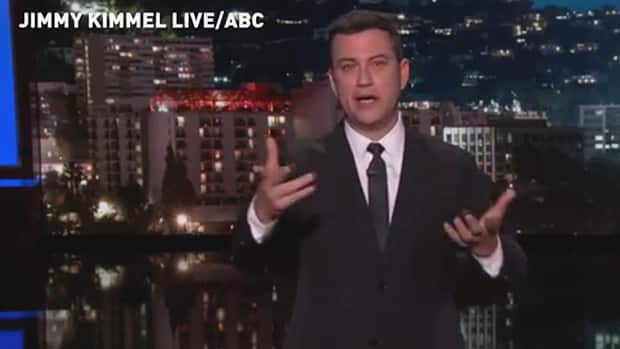 Jimmy Kimmel chokes up talking about Cecil the lion

There was a time not too long ago when late-night TV could tackle politics in a manner that was subtle, relevant and —most importantly — genuinely funny to a broad audience, not just ideological fellow travellers. The foibles and mannerisms of both Republican and Democrat politicians provided all the ammunition talented comedians needed to craft their skits, parodies and monologues.

The humour of Chevy Chase's bumbling Gerald Ford and Dana Carvey's accident-prone Bob Dole relied on their targets' proclivity for clumsiness. Bill Clinton was a frequent foil on The Simpsons during his time in office, caricatured as a folksy layabout. Simple, classic humour that appealed across party lines and largely eschewed spleen-venting, self-righteous sermons from Hollywood funny people.

That doesn't mean it was hugs and kisses between comedians and politicians, of course. Long before Trump's myriad of celebrity feuds, George and Barbara Bush engaged in a long-running real-life spat with the characters of The Simpsons in the 1990s. By and large, however, mainstream political comedy never went too far off the rails into unfunny hacky activism. As long-time Simpsons showrunner Al Jean stated in an interview: "Our rivalry with the Bushes came from a more genteel era."

If one were to look for the catalyst that sparked a new era of political humour, it would be the attacks of Sept. 11. Gone suddenly were society's carefree days of the previous two decades; replaced by a gloomy, decidedly more serious new world; one in which comedians struggled to adapt. The patriotic fervour sweeping the nation post-9/11 further constrained the limits of comedy – the late Robin Williams once noted he modified his USO stand-up performances after a decidedly "red state" reaction to jokes regarding the intelligence of President George W. Bush.

The post-9/11 pop culture atmosphere proved poisonous to traditional political humour, and what replaced it might be best referred to as an era of post-humour activist comedy. The anodyne humour of Carson and Leno suddenly felt strangely out of step with the national mood in an age of the War on Terror. Audiences craved something edgier and more relevant.

This uncertain comedic void following 9/11 was ultimately filled by a new age of smug, self-righteous comedy-slash-activism led by snarker-in-chief Jon Stewart, who tapped into liberal discontent with the invasion of Iraq, and with the Bush administration generally. Indeed, it is possible to pin down an exact start date of this new era of humour: October 15, 2004: the day Jon Stewart appeared on, and immolated, the hosts of CNN's Crossfire.

Hollywood's liberal inclinations were no secret, but with the controversial American invasion of Iraq, comedians openly took on the role of activist-entertainers in their work. Political humour adopted a condescending, elitist edge toward Republicans and their supporters, who were unapologetically portrayed as semi-literate white trash. While the younger audiences of The Daily Show and The Colbert Report were dwarfed by the The Tonight Show, they nonetheless enjoyed a far broader cultural relevancy in a time of national discontent.

Now gone was the notion that a comedian is doing something wrong if his political humour is met with rapturous applause – or worse, the government's approval — rather than laughter. One wonders what the late iconoclasts Lenny Bruce or George Carlin would think of late night comedians huddling with politicians in crafting routines.

The mainstream media compounds the issue by turning late-night skits into headline news, particularly following Trump's election. A searing monologue, or ode to Hillary Clinton, pushes the right buttons among left-leaning reporters, who in turn devote considerable ink to anti-Trump late-night routines. To that end, a good-natured skit about, say, Vice President Mike Pence's perpetual squint will get far less play in the national news media than the hot takes of Trevor Noah.

Perhaps comedians will realize the harm they are doing to their political causes, and to comedy itself, by using their platforms as a means of gaining membership to the League of Progressive Moral Outrage. Rather than making politics better, they are simply making comedy worse.

Humour certainly evolves, but the unseemly alliance of comedians, politicians and news media now flourishing flies contrary to the anti-establishment trails blazed by generations of comedians prior. As it stands, we will be left with a hacky activism dressed in the thinnest veneer of comedy that does a disservice to politics, and to the proud tradition of American political humour and satire.