Andrew Scheer is effectively pro-choice, why not just own it?: Neil Macdonald

Conservative Leader Andrew Scheer is hardly the first federal party leader to insist he can keep his personal views and political policies separate - Canada's last five prime ministers, including Justin Trudeau, have used the same dodge. But here's why it's not working so well for Scheer.

Plaintively, Andrew Scheer is now asserting that it's possible to be a social conservative – anti-abortion, anti-gay, suspicious of public schooling, that sort of thing – and still become prime minister.

The key, he seems to think, is to claim his views on such matters are strictly personal – he is a religious man – and swear that as prime minister, he would never try bringing the land's laws more into alignment with his faith.

As though "faith," a term treasured by social conservatives for its virtuous connotation, confers some sort of shield that licenses bigotry.

Following that logic, a member of the Westboro Baptist Church who desires running for public office could say, "Yes, I believe GOD HATES FAGS, but that's a matter of my deeply held faith, you see, and I promise that as president I would govern for all Americans and that I would not re-open the debate on same-sex marriage."

Okay, look: I'm not saying Scheer has anything in common with the fundamentalist Christian nutcases who show up at American military funerals screeching their hatred for gays, but it's basically the same argument.

In any case, Scheer is hardly the first one to insist on the personal/political distinction. Our last five prime ministers, including Justin Trudeau, have used the same dodge. It just doesn't work as well for Scheer.

Justin Trudeau, in 2011, declared he was personally opposed to abortion, but supported a woman's right to choose it.

Stephen Harper, an evangelical protestant, was anti-abortion (or "pro-life," another virtuous-sounding euphemism), but promised not to tamper with abortion access in Canada, and stamped on any Tory MP who tried to raise the issue.

Jean Chretien, as he often did, crafted a clever stock response.

Usually in French, he'd say his initials were JC, his name Jean Chretien (John Christian in English), his mother's name was Mary, he became a minister at 30 and was crucified a few years later, and that he grew up on Boulevard Pie XII in Shawinigan, named for Pope Pius. "So what do you think I think?" he'd conclude, before rattling off some message track about governing for all Canadians.

Paul Martin always maintained that as a Roman Catholic he opposed abortion, but would not interfere in a woman's right to choose.

And the most interesting exchange I ever witnessed on the subject was between Brian Mulroney and my former colleague Keith Boag, back in 1989.

Boag was quieter and less confrontational than the rest of us, and Mulroney liked him better. The Supreme Court had struck down the old abortion law as unconstitutional a year earlier, Parliament was flailing around trying to create a new law, and Boag politely insisted on getting Mulroney's views on camera.

After trying to decline, Mulroney finally said that he was personally pro-life, but that he respected the opinions and choices of others, and would allow a free vote.

You could see Mulroney's face harden as he realized the semantic trap he'd led himself into.

Mulroney, though, did not want to be tagged pro-choice for political reasons. He wanted to straddle the question, as did Chretien, Mulroney, Martin, Harper, and, until his thinking "evolved," Justin Trudeau. 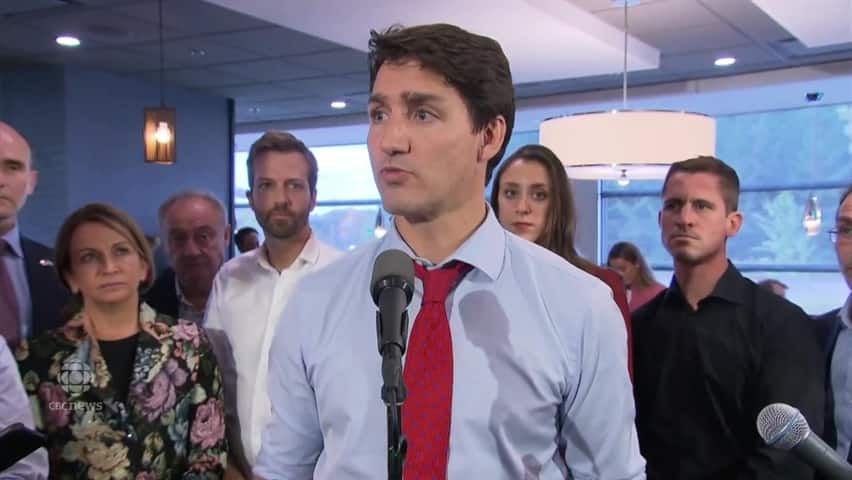 Trudeau says his stance on abortion has 'evolved'

12 months ago
0:50
Liberal Leader Justin Trudeau said his personal views on abortion have "evolved" over the years, despite saying he was personally opposed to abortion in 2011. Trudeau says it's not coherent for men to say they are pro-choice but against abortion. He was answering reporter questions during a stop in Quebec. 0:50

The fact is, all five were effectively pro-choice. All five, as prime minister, were willing to let women continue to choose abortion, despite their own personal disapproval of abortion.

Which brings us to Andrew Scheer. Why doesn't the reliable old personal/public dodge work for him?

David Herle, once Paul Martin's closest adviser, says his old boss would not get away nowadays with the personal/public distinction, and neither would any of the others.

Today, says Herle, he'd counsel Martin to simply say, "I'm pro-choice," and forget about the personal-faith caveat, because it's irrelevant to governing anyway.

Which of course is what Justin Trudeau has done, although he has added some new-age male feminist drivel about how as a man he has no right to any view on abortion.

So why wouldn't Scheer take the pragmatic view and say his position is pro-choice, which, effectively, it is, at least if he's telling the truth when he promises to uphold the legal status quo?

And why stubbornly refuse to walk in a Gay Pride parade? Even Doug Ford has walked in a Pride parade, for heaven's sake.

Well, perhaps Scheer is so Catholic he fears a rebuke from the Church, something Paul Martin suffered for his policies on same-sex marriage and abortion.

Or perhaps he thinks he has to snuggle up to the hardline Conservative base – the ones who sneered at Conservative MP Lisa Raitt for her pro-choice views and mean-spiritedly applauded when she lost her seat last week. If that's the case, he's sadly misguided; the red-meat fundamentalists have already turned on him, and in any case, they're outliers.

More likely, Herle is right: urban voters have decided Scheer is too devout to trust, and too out of step with the changing times. Just look at his expanded, largely anti-abortion caucus. A lot of the new members are middle-aged white males, a rather jarring reality the Conservative party is proudly highlighting in its tweets, for some reason.

(1/4) Incredibly proud to welcome our new Conservative Members of Parliament from across the country!<br><br>Canadians have elected the strongest Official Opposition in history. We're going to keep fighting for Canadians!<a href="https://twitter.com/hashtag/cdnpoli?src=hash&amp;ref_src=twsrc%5Etfw">#cdnpoli</a> <a href="https://t.co/rvw1dkk5Ln">pic.twitter.com/rvw1dkk5Ln</a>

Scheer says he's staying as leader of the Conservatives. Of course he wants to. He needs the job, and the rent-free house. But former interim leader Rona Ambrose or Lisa Raitt (especially if Raitt can improve her French), would be a more sensible choice as the face of the party. And more likely to win in urban Canada.