If true free trade were the objective, Canada and the United States would simply open their markets to one another, and allow untrammelled — free — trade. But that would bring lobbyists racing to Ottawa (and to Washington), threatening massive job losses.

*Free with the exception of our many protected industries

If that is the case, Mulroney asked, how do you explain a 4.1 per cent unemployment rate in the United States, never mind the fact that Americans sell us more than we sell them?

By any sensible measure, a 4.1-per-cent jobless rate is at or better than full employment.

Inevitably, discussing this gets into the concept of the NAIRU, which stands for "non-accelerating inflation rate of unemployment" — something economists argue about. Some say there is no evidence that it exists, while I've heard others put it as high as seven per cent in Canada, although the threshold does change over time.

Simply put, it means that if the jobless rate goes low enough, it gets into a pool of people who are unemployed for a reason.

They might be disabled, or unmotivated, or just not terribly bright. In any case, their skills are effectively worthless, and any business that hires them will perforce be less productive as a result.

And a loss of productivity, if you think about it, is inflationary. The business is paying more for less work, and business passes on costs to consumers. 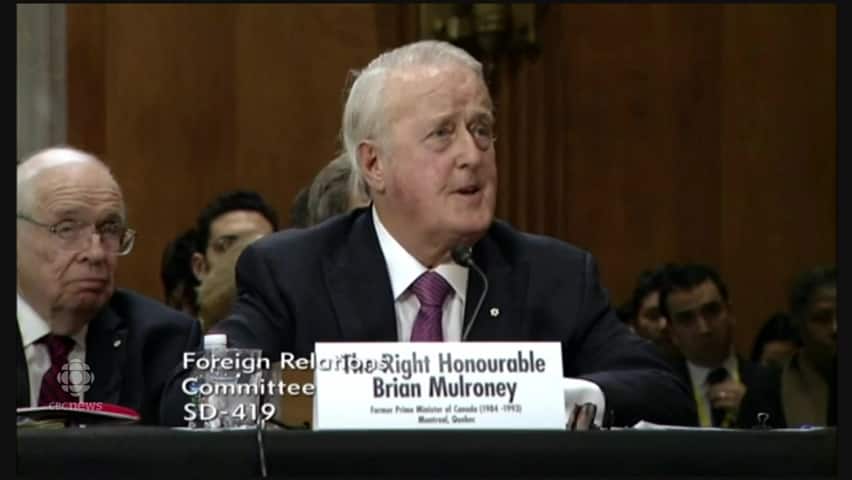 3 years ago
1:18
Former prime minister Brian Mulroney tells a U.S. Senate committee that a renegotiated NAFTA must be good for all partners, not just perfect for one. 1:18

The political left, naturally, abhors the concept of a NAIRU. Left-leaning thinkers believe business desires, and often conspires, with politicians to create a permanent pool of low-paid indentured labour, and any talk of a NAIRU plays into the hands of rapacious free market capitalists.

But the concept does make a certain amount of sense. It's also something no sensible politician wants to talk about; it's easier to say that the right level of unemployment is no unemployment at all, which is patently impossible, but sounds good.

The fact is, inflationary pressures tend to take the back seat to getting re-elected.

Again, think about it: Canada runs a milk and poultry cartel known as marketing boards. Supply is managed, and price-fixing is actually a government responsibility.

There can be no doubt about whether this is inflationary. It is. But what politician is going to defy it? (Maxime Bernier, that's who, and he lost the Tory leadership race to the smiling Andrew Scheer, who is committed to maintaining the cartel).

For that matter, NAFTA itself is a deliberately misleading name for a deal that enshrines protectionism, which is inflationary.

NAFTA stands for the North American Free Trade Agreement. If indeed free trade were the objective, Canada and the United States would simply open their markets to one another, and allow untrammelled — free — trade.

But that would bring lobbyists racing to Ottawa (and to Washington, D.C., albeit in lesser numbers), threatening massive job losses.

Our protected retail sector would declare that Canadian merchants, forced to compete on level ground with American merchants, would have to fire hundreds of thousands of workers.

Our protected banks would warn that letting in American competition and exposing Canadians to a world without punitive banking fees and fixed-rate long-term mortgages with no payoff penalty would somehow erode our economic sovereignty.

Our protected cultural industry would predict the end of Canadian culture.

Our protected wine industry would talk about professional suicide.

Our protected dairy and chicken farmers would demand billions in compensation from the government.

My guess is our lumber industry would be pretty happy, but then they offer a naturally superior product, so they're different.

And the lobbyists would, by and large, be right. When the original bilateral Free Trade Agreement was struck in 1988, it wiped out certain inefficient, protected sectors.

Canada's shoe industry was the perfect example. There were once hundreds of shoe manufacturers here; there are now a few dozen.

But it was judged that the price was worth paying; that consumers would benefit from greater competition, and other winning industries would become more efficient.

There is, however, a limit. We will, presumably, learn where it is with the outcome of the NAFTA renegotiation.

The question is actually simple: How much are we willing to pay to protect jobs that would not otherwise exist?

This is not, incidentally, an argument in favour of real free trade. It is merely to point out that politicians, from the American far right to the Canadian far left, are largely uninterested in free trade, or anyone else's notion of fair trade, or containing inflation.

That is why central banks exist. Essentially, it is left to them to compensate for politically motivated fiscal policies.

To the extent that they can, of course. Hooray for them.