To the people at Trump's Louisville rally, it didn't matter in the slightest that Comey confirmed the FBI is investigating whether Trump's campaign officials colluded with Russian officials to influence the outcome of the election.

But let's not talk about that. Let's talk about Trump's favourite subject: winning

Like one of those trust experiments where the subject falls backwards into a crowd, arms spread, eyes closed, counting on friendly hands to intercept a painful crash, President Donald Trump fled to Louisville on Monday.

There, swaddled in love, he smiled and spoke about his favourite subject: November 8, 2016.

He loves talking about that day, because he absolutely, unquestionably won the election, and not even the liberal haters or the subversives in Washington's intelligence agencies, or the director of the FBI, or even the failing New York Times can rationally claim otherwise.

The crowd members arranged behind Trump, white and mostly middle-aged — not that that should be taken to mean anything — cheered, happy as clams. They can't be reminded often enough about Nov. 8. That was the day they crushed the elites and leftists, and took their country back.

To them, it was immaterial that just hours earlier, FBI director James Comey (whom Trump praised as gutsy and honourable when Comey decided, during the last days of the election, to publicly re-open the investigation into Hillary Clinton's emails), had basically called Trump a liar in testimony on Capitol Hill, denying his tweets about Barack Obama ordering the wiretapping of Trump Tower.

Nor did it matter to them in the slightest that Comey confirmed the FBI is investigating whether Trump's campaign officials colluded with Russian officials to influence the outcome of the election. 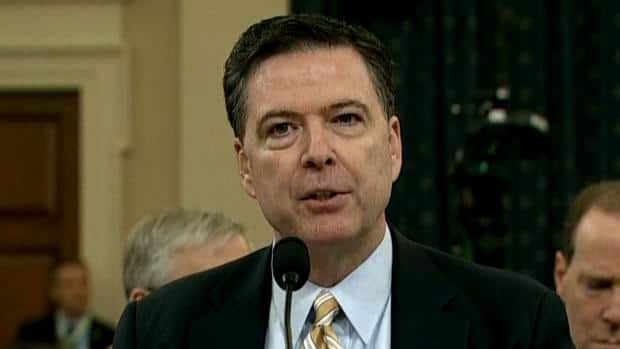 To the people at the Louisville rally, and the rest of Trump nation, all that means is that Comey, and Mike Rogers, the National Security Agency director who testified beside him, are creatures of the filthy Washington swamp their president promised to drain. They are almost certainly part of the Deep State conspiracy to undermine Trump, the so-called "intelligence" officials who leak things to reporters and secretly hate America for being free.

These are people who listened very closely when Sean Spicer, White House press secretary, publicly repeated Fox News commentator Andrew Napolitano's theory that Obama turned to GCHQ, Britain's secret eavesdropping agency, to wiretap Trump during the campaign, so there would be "no American fingerprints" on the dirty operation.

That Spicer was treated as unhinged by Washington's establishment only made the allegations more believable to the base, especially when GCHQ and British Prime Minister Theresa May angrily denounced the story as utterly false.

Nor did it matter that Fox News issued a statement saying there was no basis to support Napolitano's claim, or when Fox let it be known that Napolitano would no longer be appearing on Fox.

Napolitano's theory sounded pretty good. And did President Trump not himself publicly praise Napolitano during that press conference he held last week with that female German chancellor whose left-wing hand he wisely refused to shake? Did the president not call Napolitano a "very talented legal mind," and a "very talented lawyer?"

Almost certainly, their takeaway from the whole episode was that Fox News — for many years their only source of news and commentary — has become a suspect organization, firing brave truth-tellers like Napolitano and that courageous guy Roger Ailes, the head of Fox News who supported President Trump, just because a bunch of women said he'd sexually harassed them.

The lamestream media said the same thing about the president, especially after that cleverly faked recording where someone sounding like Donald Trump talked about grabbing women's genitals. (And even if it wasn't faked, so what? A lot of women probably target a fellow as good looking and rich as the president, right? It might not be politically correct to say so, but don't women ask for it all the time?)

As for the senior Republicans in Washington, people like House Intelligence Committee Chair Devin Nunes, the guy who traitorously invited the FBI director to slander President Trump under oath and then even said a "gray cloud of suspicion" now hangs over the White House, one word: RINO.

Republican In Name Only. Fake conservatives.

Washington is infested with them. Senate Majority Leader Mitch McConnell is a perfect example; he actually says he doesn't like the president's tweeting. House Speaker Paul Ryan is another lousy hater. We'll see about them next election.

Same goes for the federal judges, or, as President Trump calls them, the so-called judges, who keep striking down his efforts to keep Muslim terrorists from entering America.

It's not fair that they refuse to believe the bans aren't religious discrimination, and that they insist on quoting the president's election promise to ban all Muslims from coming into the States.

The president's right. They aren't real judges. They're just judicial activists, and they should be fired, or something.

In fact, it's all just a conspiracy.

President Trump is going to bring back everybody's job.

He is going to give us better health care for less money, and he has kept all his promises, and if he says the Russia thing is fake news, then it is, and if he says millions of illegal immigrants illegally voted for Hillary Clinton, then they damned well did, and the stupid media and liberal elites can just stop their yapping about facts and evidence.

Remember? Remember? You lost, and we won, and this is our country now. And Obama was born in Africa.