Jagmeet Singh's outreach has been about thwarting violence, not stoking it

NDP leader Jagmeet Singh’s presence at various rallies has been scrutinized and condemned. What it hasn’t been, really, is understood.

These spaces are exactly where Singh's message needs to be heard

NDP leader Jagmeet Singh's presence at various rallies has been scrutinized and condemned. What it hasn't been, really, is understood.

I met Jagmeet Singh when I was in Grade 8. He was president of the Sikh Students Association at Western University, and I was attending a function he had organized for young people at the local gurdwara, where Sikhs go to worship.

He quickly became a mentor. We used to play basketball together, he would cook me dinner and, a couple years later, he even helped me with my biology homework. His political journey is one that I've joined him on in the past — most recently, as the communications director on his leadership campaign. But the greatest kindness he did for me was helping me deal with the trauma of the 1984 Sikh genocide.

In my formative years, I was so affected by the events surrounding 1984 that I couldn't sleep. I did not experience the events of 1984 directly, but its horror was always present.

The 1984 Sikh genocide started with the Indian government's imposition of harmful social and economic policies in Punjab. It quickly turned into horror, where thousands of Sikhs were disappeared and extrajudicially murdered. Some were secretly cremated by the police and many more were burned alive in government-planned massacres.

I was fortunate that much of my family escaped the violence. Many had already settled in Canada and the rest were living in Kashmir, dealing with another set of human rights violations. But as a child, I still wondered things no child should have to wonder: Would someone try to hurt me, too? Was my family safe? Could it happen here, in Canada?

My experience was not isolated. Many young Sikhs like me grew up in a climate of fear, even in the relative calm of Canada. We were taught to repress our pain, not to speak about 1984, about the genocide, because "you don't know who's listening." Even in Canada, it wasn't uncommon for vocal human rights advocates to hear that members of their family had been picked up, tortured and "disappeared" by state security forces in India.

The children of my generation got the message: don't be too vocal about human rights, or you'll pay a price. Or your loved ones will.

Jagmeet Singh taught me how to channel that pain and turn it into something positive. Instead of avoiding it, he talked to me — and so many others — openly and honestly about the 1984 Sikh genocide. About how it was okay to feel enraged, and helpless. And about how the first step toward healing was to turn that rage into something positive for our community, lest we perpetuate the cycle of violence. For me, that path led to law school and graduate studies in conflict, law and transitional justice. It could have gone another way.

Canada opened its arms to Sikhs when the community was vulnerable, and Sikh Canadians are forever thankful. They are politically engaged and patriotic. Canada offered them safety and the freedom to talk about human rights and self-determination. All Sikh Canadians want is for India to be as good to them as Canada has.

Here's another thing that seems to be missing in discussion of this issue: "self-determination" doesn't mean violent separation. It doesn't even necessarily mean the creation of a new state. It means the right of the Sikh community in India to determine their own future. It's a right shared by all peoples, from Quebec to Catalonia. It's a right so important that it is enshrined in the very first article of the United Nations Charter.

That brings me back to the news of today, and the controversy over Singh's attendance at a procession in San Francisco in 2015. First off, Singh understands that the photos of Jarnail Singh Bhindranwale, which were present there, mean different things to different people; that for many victims of genocide, they are a marker of pain and an unavoidable symbol of survival — similar, in some ways, to how iconic images of Malcolm X and Che Guevara have become emblematic of resilience for many others. 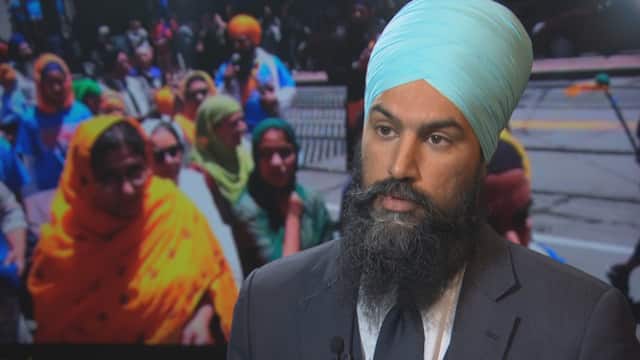 3 years ago
8:37
Singh rejects glorification of Air India bombing mastermind, but appearances by the federal NDP leader at rallies for Sikh independence are raising some questions 8:37

Singh wasn't there because he is an extremist or because he supports violence; he has expressly condemned political violence in statements over the last few days. Rather, he was there because he knows his words can make a difference in those spaces. He understands that these events may be the last occasions where he can help young Sikhs find a positive outlet for their pain, before they are consumed by it. It is telling that most media coverage hasn't criticized what Singh said, but only the forum in which he said it.

These spaces are exactly where Singh's message needs to be heard. If he can connect with a single young person in one of those audiences, the way he connected with me, and make that person understand that things can be okay, then he doesn't deserve our condemnation. He deserves our praise.

Amneet Singh Bali served as the communications director for Jagmeet Singh's leadership campaign. He is featured in the Canadian Museum for Human Rights for his work on the Punjab mass cremation cases and Sikh Genocide. He is also a former Social Justice Fellow in Global Governance in Democracy at Windsor Law and a current LLM and Transitional Justice Candidate at Western University's Faculty of Law.

Amneet Singh Bali served as the communications director for Jagmeet Singh’s leadership campaign. He is featured in the Canadian Museum for Human Rights for his work on the Punjab mass cremation cases and Sikh Genocide. He is also a former Social Justice Fellow in Global Governance in Democracy at Windsor Law and a current LLM and Transitional Justice Candidate at Western University's Faculty of Law.