At the very least, Donald Trump and his most rabid followers have been objective allies of the white supremacist movement, even if they thought they weren't. Vladimir Lenin would have called them "useful idiots."

Trump's supporters cannot, by now, have any doubt about what they put into high office

The New York Times Daily podcast featured an interview last week with a fellow named Derek Black, who was suckled from childhood on white supremacy and even helped create a children's page on Stormfront — his father's website — which is variously described as "white nationalist," "white supremacist" and "neo-Nazi."

His godfather was David Duke, probably the most famous Ku Klux Klansman in the United States.

Black spent his youth attending rallies and learning how to proselytize, and generally bathing in the notion that the only way to make America great again would be to purge it of non-white races.

In any case, the arc of the interview was that eventually Derek Black went off to college out of state and found himself contending with educated people who would systematically shred the studies and pseudo-science Black cited in support of his beliefs that, for example, there are IQ differences between races.

In short, Black himself received a humiliating education, decided white supremacy was a fringe movement for ignorant, angry people and publicly abandoned it. In return, his family basically disowned him.

It was much more, though, than a feel-good, I-have-seen-the-light interview. Black explained the white supremacist movement's recruiting strategy, which, he said, necessarily involved some self-concealment.

"My whole talk was the fact that you could run as Republicans and say things like we need to shut down immigration, we need to fight affirmative action, we need to end globalism, and you could win these positions, maybe as long as you didn't get outed as a white nationalist."

The plain fact is that America now has a president who operates straight from the white supremacist playbook. At the very least, Donald Trump and his most rabid followers have been objective allies of the white supremacist movement, even if they thought they weren't. Vladimir Lenin would have called them "useful idiots."

Earlier this month came the march in Charlottesville, Va., which was organized by a white supremacist, Jason Kessler, and whose promotion contained unambiguously white-supremacist and even neo-Nazi symbolism. This was a march for whites, mostly male whites.

The pretext was preventing the removal of a statue of Gen. Robert E. Lee, who led the military effort to maintain slavery. Charlottesville had already renamed the space in which the statue stands from "Lee Park" to "Emancipation Park," and the white supremacists saw it as a chance to recruit under the guise of "protecting our history and culture."

Black said he expected the usual denunciations by politicians of both parties at just about every level, because "everyone knows it's extremely easy to condemn a white nationalist rally."

Put another way, it's a moral imperative.

And indeed, the condemnations flowed freely on Aug. 12, the Saturday after the rally took place. With one prominent exception.

That Donald Trump did not immediately denounce the marchers (though he read a boilerplate repudiation from a teleprompter on Monday), said Black, was "weird" and was taken as somewhat of a victory by his racist former fellow travellers, some of whom had shouted "Hail Trump" at the rally. 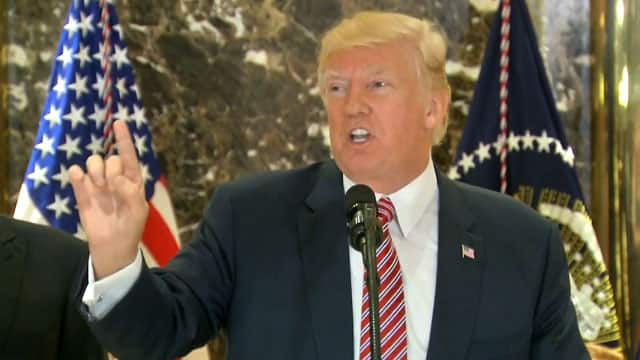 'George Washington was a slave owner'

3 years agoVideo
1:00
Trump asks if statues of first U.S. president should be taken down because he was a slave owner 1:00

Then came Trump's news conference on Tuesday, Aug. 15, when he said that some of the marchers in the white nationalist rally were "very fine people" and focused on criticizing the counter-protesters and those who wanted to take down the statue of Lee.

Ask yourself this: how in heaven's name do "fine people" find themselves among torch-waving men shouting about non-white minorities and "blood and soil?" (Look up the provenance of that slogan). And why would a fine person not bolt at the first chant of "Jews will not replace us?"

Trump then said: "You had people in that group that were there to protest the taking down of, to them, a very, very important statue and the renaming of a park from Robert E. Lee to another name."

Now. Look at those last three words: "to another name." Donald Trump, president of the United States, not only thought there were fine people among the white supremacist marchers, he refused to say "Emancipation Park."

Some might argue that this president is just too dim to know the park's new name, but remember, Trump emphasized that he waited a few days in order to collect all the facts. Presumably, this Ivy League-educated president, who has access to the most knowledgeable advisers and who by his own word took the time to gather all the facts, knew the park's new name and just couldn't bring himself to say it.

The president had, in his view, validated the white supremacist messaging strategy in a stroke.

What they heard, he said, was "Donald Trump thinks we're fine." All the people who just needed a little extra nudge, to be told their son would be denied university because of affirmative action, or that an immigrant would take their jobs, had just been nudged.

Black called it the most important moment in the history of the modern white nationalist movement. David Duke and other white supremacists rejoiced. They've crawled out from under their rocks and are basking in their president's complicity.

A lot has already been written about this. Criticism has been ferocious. Still, most in the mainstream media have stopped short of saying outright that Donald J. Trump, president of the United States, is a white supremacist, or white nationalist, or whatever it is these people call themselves.

But then, for the longest time, the mainstream media stopped short of saying outright that Trump is a liar. The New York Times busted that dam, citing Trump's perpetuation of the lie that Barack Obama was not born in the United States, and now, it's barely controversial to call the president a liar.

By the same logic, it's now time to start referring to Trump as what he clearly is. And by that, I mean someone who panders to racists and appears determined to maintain a system that grants whites huge entitlements. And that system is known as white supremacy.

Look at some of the people he's surrounded himself with since becoming president. I am mildly ashamed for having, at an event I moderated last spring, upbraided an audience member who proclaimed there are white supremacists in the White House.

However, to me, the most telling moment last week was when Trump deliberately avoided the term "Emancipation Park." What sort of person finds the word "emancipation" unspeakable?

Then, a week or so later, he pardoned his friend and political ally Joe Arpaio, the former Arizona sheriff whose brazenly racist policies – pulling over anyone who looks Latino on suspicion that the person might be breaking U.S. law – had earned him a criminal contempt conviction in federal court.

As it turns out, Trump tried to have the Justice Department's case against Arpaio dropped, and when that didn't work, made the conviction go away with a stroke of his pen.

To Trump, "Sheriff Joe" was convicted for "doing his job."

That this president thinks rounding people up and abusing them based on their skin colour constitutes doing one's job pretty much says it all.

The office of the president is meant to confer dignity. It is hard for the media to outright label a sitting president a white supremacist, or even a garden variety racist. If Trump was still a private citizen, this would be easier.

But by your words and actions shall you be known. Trump's supporters cannot by now have any doubt about who they put into high office and neither can the congressional Republicans who still treat him so gingerly.

It reminds me of the old ditty my dad used to sing about the drunk collapsing beside a pig in the gutter: You can tell a man who boozes by the company he chooses / And the pig got up and slowly walked away.