Canada could get squashed by Trump's tax overhaul

Previously, Canada could boast about lower business taxes, but Trump's Tax Cuts and Jobs Act abolishes that advantage. So why invest in Canada and pay higher taxes when you can invest next door and pay less?

Our current tax policy leaves us as sitting economic ducks

Prime Minister Pierre Trudeau once remarked that Canada's relationship with the United States was like sleeping next to an elephant: "No matter how friendly and even-tempered is the beast, one is affected by every twitch and grunt."

Well, forget twitches and grunts. With the biggest tax cut in decades being signed into law south of the border, the elephant is about to start doing somersaults in the bed – and if our own politicians don't take action, the Canadian economy could end up getting squashed.

The Tax Cuts and Jobs Act, which was signed into law by President Donald Trump on Friday, lowers the tax rate on high income earners and expands the child tax credit for families, among other things. But the centrepiece is the single largest business tax reduction in American history, dropping the federal rate from 35 per cent to 21 per cent beginning in 2018.

Policy wonks south of the border will debate the pros and cons of the bill, which will see taxes go down for the vast majority of Americans. But from a Canadian standpoint, we should be focused on what it means for our country's tax competitiveness.

Worse still, the Trudeau government is heading in the opposite direction on taxes generally: while it recently resurrected a promise to lower taxes for small business, the general rate is unchanged. It has promised a national carbon tax in 2018, scheduled a payroll tax hike beginning in 2019 to pay for higher Canada Pension Plan contributions, and even introduced an automatic tax escalator on alcohol.

While the government did cut income taxes last year, one study suggested that the average Canadian family was actually paying an additional $840 in taxes. With spending slated to jump a whopping 21 per cent by the end of the Trudeau government's third year in power, there's little appetite in Ottawa these days for big tax cuts.

Faced with the new American reality, this is cause for concern. Why invest in Canada and pay higher taxes when you can invest next door and pay less? This is especially true when competing for foreign investment.

Last year, even before any big American tax cuts, the Trudeau government's own Advisory Council on Economic Growth noted that foreign direct investment (FDI) is "a critical driver of economic growth" and observed that Canada was "falling behind" in securing FDI.

It's not as if Canada can count on other advantages to mitigate being competitive on taxes; regulatory uncertainty, for example, helped kill large projects such as Energy East.

President Trump regularly leans on American companies to invest more at home – a big problem for us considering American companies currently account for half of all FDI in Canada. Add a tax cut to that political pressure, and it could mean potentially big job losses as businesses head across the border and divert new investment stateside. 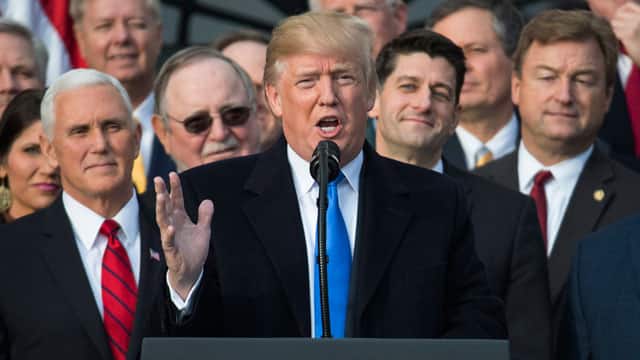 3 years ago
2:01
U.S. President Donald Trump is celebrating the Republicans' tax bill after it passed in the House and Senate. It is the first major bill Trump's administration has passed and represents the most sweeping tax changes in the U.S. in decades 2:01

Even setting aside foreign investment, Canada has long suffered off and on from a brain drain of our best and brightest to the U.S. This is especially true when it comes to "innovative" industries like technology, which has precisely the types of jobs Canadian governments trip over themselves to cultivate.

But good luck convincing entrepreneurial Canadians to stay behind with red tape and high taxes, when they could move to start a new business in a much more favourable environment. There's only so much corporate welfare to go around. And Canadian investors will want to get in on the action as well, taking a pass on investments at home in favour of better returns down south.

Aaron Wudrick is the federal director of the Canadian Taxpayers Federation.