There's an obvious way to influence U.S. policy — be the last one to talk to Trump: Andrew MacDougall

When a president solicits views willy-nilly and makes decisions impulsively, the game for senior staff becomes who can get to the boss last — not first — to jam him into their preferred course of action.

If 100 days of Trump has taught us anything, it's that the president hasn't thought much about governing

Hands up if you, like me, watch news of the Trump administration, mouth agape, from the comfort of the couch. More than once I've wondered whether my couch would be better qualified for the Oval Office.

Now, I have a great couch (the best, the biggest, you've never seen anything like it, it's amazing), but I wouldn't want it running a country, which is where the United States has ended up under the stewardship of Donald Trump.

And no, I'm not referring to a "sofa government," the kind popularised by former British Prime Minister Tony Blair, who often bypassed cabinet in favour of informal chats with ministers and advisers on the sofas of 10 Downing Street. I'm talking about an actual sofa running the most powerful nation in the world.

Like the best chesterfields, the current president adapts his shape to whoever last sat on him. This apparently goes double when the president is himself sat on a sofa watching cable news.

It was seeing dead Syrian children on television — along with a late word from daughter Ivanka, whose foreign policy credentials are zero — that finally got the president to lob a few Tomahawks Bashar al-Assad's way. The current "will or won't he" on the question of a NAFTA renegotiation also smacks of a rotating cast of advisers, legislators and stakeholders whispering contradictory views in the president's ear.

On the campaign trail, with Steve Bannon and other economic nationalists whispering in his ear, Trump was going to tear up NAFTA ("the single worst trade deal"). Then he met with Prime Minister Justin Trudeau and declared Canada would only receive a tweak in any NAFTA talks. It was Mexico that would take the beating. Then he met with some dairy producers and heard that Canada was evil. He heard some bad stuff about lumber too. And so he pledged to unilaterally withdraw from NAFTA, only to walk it back after calls with Mexican President Pena Nieto and Prime Minister Trudeau.

Now, a leader receiving contradictory views isn't news; it's par for the course. It's just that most leaders have the common sense to not provide a running commentary on the advice they receive and how it's impacting their deliberations.

But Trump and his Twitter feed are an open book. He advertises his ignorance, hardly a sound negotiating strategy. Ten minutes with Chinese President Xi Jinping was all it took for Trump to realize North Korea is, like, really hard and stuff. Trump also found out the hard way about health care ("nobody knew health care could be so complicated," he remarked). Anyone doubt that the current tax reform package is headed for a similar dumpster (fire)?

The couch modus operandi goes a long way toward explaining the White House's current dysfunction; it's what fills the vacuum when the man or woman at the top has no firm views on anything.

If 100 days of Trump has taught us anything, it's that the president hasn't thought much about policy or governing. To pick another example, Trump banged on about building a wall with Mexico every day of the campaign, and so you would think he'd come to the White House armed with at least a hint of an idea of a proposal that might eventually, if tended to properly, produce a border wall to please his base. Nope. It's all bluster.

How to advise someone with no interest in the job, and little aptitude for its many demands? Audition for Game of Thrones by ratting out fellow advisers to the Washington press corps, obviously. That's what the staffers under Reince Priebus, Steve Bannon, Jared Kushner and Sean Spicer have been doing while the rest of us weep watching the goat rodeo. They can't advise their president any more than the president can temper his whims.

To operate effectively, political offices need structure, and access to the boss needs to be ordered in some rational way. There's too much going on for a leader to be run at on every issue, from every direction, all of the time.

During my time with Prime Minister Stephen Harper, there were strictly defined routes to decisions. The business of government moved (mostly) through an orderly cabinet process, while the politics of government was hashed out (mostly) in the Prime Minister's Office. The advice received by the prime minister from the bureaucrats on policy was covered with the views of political advisers, and then Mr. Harper took the final decision.

If you missed a memo deadline for his nightly briefing package, the prime minister missed your advice. There was no barging into his office to get a decision on the sly unless an unexpected pressure necessitated it. Some viewed our system as cumbersome, but it at least forced decisions into a coherent pipeline. Harper certainly didn't go with whomever he spoke to last; he was too much his own man for that.

When a president solicits views willy-nilly and makes decisions impulsively, the game for senior staff becomes who can get to the boss last — not first — to jam him into their preferred course of action. When the president responds strongly to cable news, it prompts leaks to cable news outlets. Couch style also promotes leaving everything to the last minute. If this sounds like the proper way to run a government, I have a nuclear holocaust to sell you.

It's hard to see President Trump changing his ways. He's 70 years old and is used to doing things his way. To be fair, his way has brought him personal success. But it's also produced a string of bankruptcies.

Now, going bust in Manhattan, or Atlantic City, or Azerbaijani real estate is one thing, but going bust at 1600 Pennsylvania Avenue, the most important political real estate in the world, is another.

I, for one, am watching in terror through my fingers from my comfy couch. 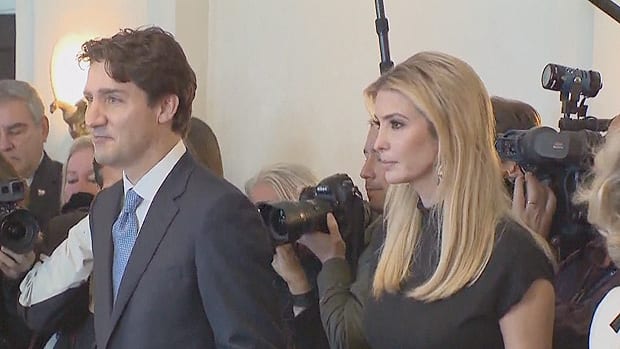 Sunday Talk | Is Trudeau the anti-Trump?

4 years agoVideo
12:10
Justin Trudeau has been upheld as the anti-Trump, but whether he lives up to the hype is up for debate 12:10

Andrew MacDougall is a Canadian-British national based in London who writes about politics and current affairs. He was previously director of communications for former Canadian prime minister Stephen Harper.