Canadian journalist Mohamed Fahmy says that the Canadian ambassador to Egypt has given him the new Canadian passport he had been requesting. 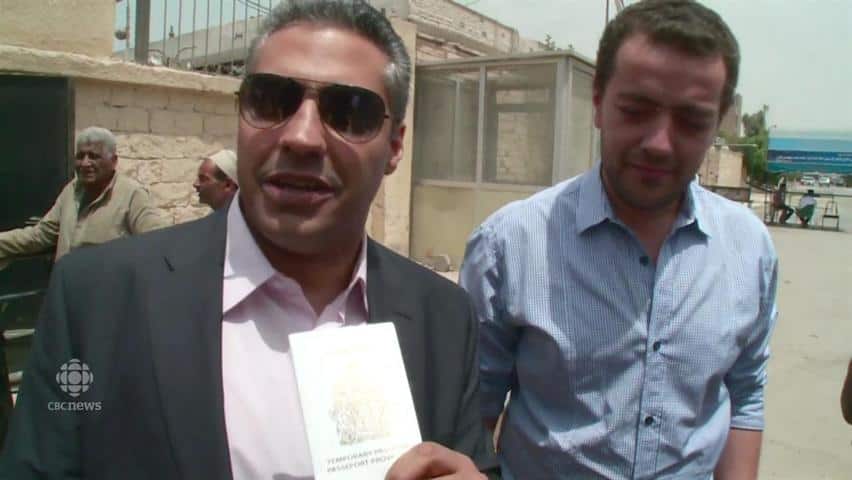 6 years agoVideo
0:56
Canadian ambassador to Egypt gives journalist the new Canadian passport he had been requesting 0:56

A "tremendously relieved" Mohamed Fahmy has his new Canadian passport.

The Canadian journalist, who is on trial in Cairo on terror-related charges, said that Canada's ambassador to Egypt gave him the passport before court proceedings continued Wednesday. Later in the day, the trial was adjourned to April 28.

Fahmy was issued a temporary passport while the permanent document is being processed in Ottawa. He said the ambassador told him it will take about a week to get the permanent passport.

﻿"I can just start moving on," a beaming Fahmy told Sasa Petricic, CBC's Middle East correspondent, outside the court building.

"This is great! I mean, it's a big deal. I know its a diversion from the crisis we're facing in here, but it's important just to be able to move on with your daily life," he said.

Fahmy's fiancée, Marwa Omara, told Petricic that now that her partner has his passport, they will start process of getting married.

"But one of the first things that she wants to do is take a drive to the beach, up north of here," Petricic reported. "They haven't been able to do that. They've been afraid of roadblocks where he could get arrested again if he doesn't have ID."

Fahmy's original passport was seized when he was arrested along with two colleagues from Al-Jazeera's English network on terror-related charges in Cairo in 2013. The three journalists were convicted in 2014 and sent to prison.

Fahmy, who was a dual citizen, renounced his Egyptian citizenship earlier this year and was released from prison, pending a retrial ordered by a judicial appeal body.

Of Fahmy's two colleagues, Baher Ghorab, an Egyptian, is also being tried again, while Peter Greste, an Australian, was deported.

The Canadian government had initially refused to issue a new passport to Fahmy, citing his bail conditions.

During Wednesday's court proceedings, the judge was supposed to get a report from a technical committee appointed to review seized video tapes to see if they constitute propaganda for the Muslim Brotherhood, Petricic said. The committee doesn't speak English, however, so they asked for a translator to go through the material.

Fahmy is accused of supporting the outlawed Muslim Brotherhood.

Character witness Naguib Sawiris, a prominent businessman who owns one of the largest private TV stations in Egypt, testified in support of Fahmy on Wednesday. He said he has known the journalist for years and that Fahmy is not a member or supporter of the Muslim Brotherhood.

Sawiris also said that Fahmy should not be held responsible for failing to get proper broadcast credentials, which is one of the accusations. The responsibility for getting proper credentials lies with the network, not Fahmy, he said.