Arrests by the RCMP in Wet'suwet'en territory in northern B.C., have triggered railway blockades and other protests across the country in support of the First Nation's fight against a natural gas pipeline.

Rail lines, ports and government offices shut down by supporters

Arrests by the RCMP in Wet'suwet'en territory in northern B.C., have triggered railway blockades and other protests across the country in support of the First Nation's fight against a natural gas pipeline.

RCMP began enforcing a court order against those blocking construction on the Coastal GasLink pipeline last Thursday. The Wet'suwet'en have established camps along the road, including the Unist'ot'en healing village that began as a Wet'suwet'en-operated checkpoint on the road in 2009, preventing people working on the pipeline from accessing the territory.

The 670-kilometre natural gas pipeline project has been approved from the province, and 20 First Nation band councils have signed agreements in support of the project, including five of the six councils in the Wet'suwet'en nation. However, the Wet'suwet'en hereditary chiefs say those councils are only responsible for the territory within their individual reserves because their authority comes only from the Indian Act.

Indigenous youth have been occupying the front steps of the B.C. Legislature in Victoria since Thursday and say they won't leave until the government ends the RCMP action.

Further, a CN railway line has been blocked near New Hazelton, B.C., since Saturday afternoon, affecting all rail traffic in and out of Prince Rupert and Kitimat, according to CN Rail.

Two ports in the Vancouver area — Port of Vancouver and Port of Delta — were also blocked by Wet'suwet'en supporters. They were served with a court order to clear out on Sunday, and early on Monday police arrested 34 demonstrators at the Port of Vancouver.

On Friday, almost 100 people went into the lobby of Canada Place in Edmonton calling for the Alberta Investment Management Corporation (AIMCo) to divest its 65 per cent equity interest in the Coastal GasLink pipeline.

A group of some 75 Wet'suwet'en supporters were blocking the Albert Street bridge in Regina on Saturday when a car pushed its way through the crowd.

There were no injuries reported and the police are now investigating, but no charges have been laid. The blockade held up traffic for approximately 40 minutes. 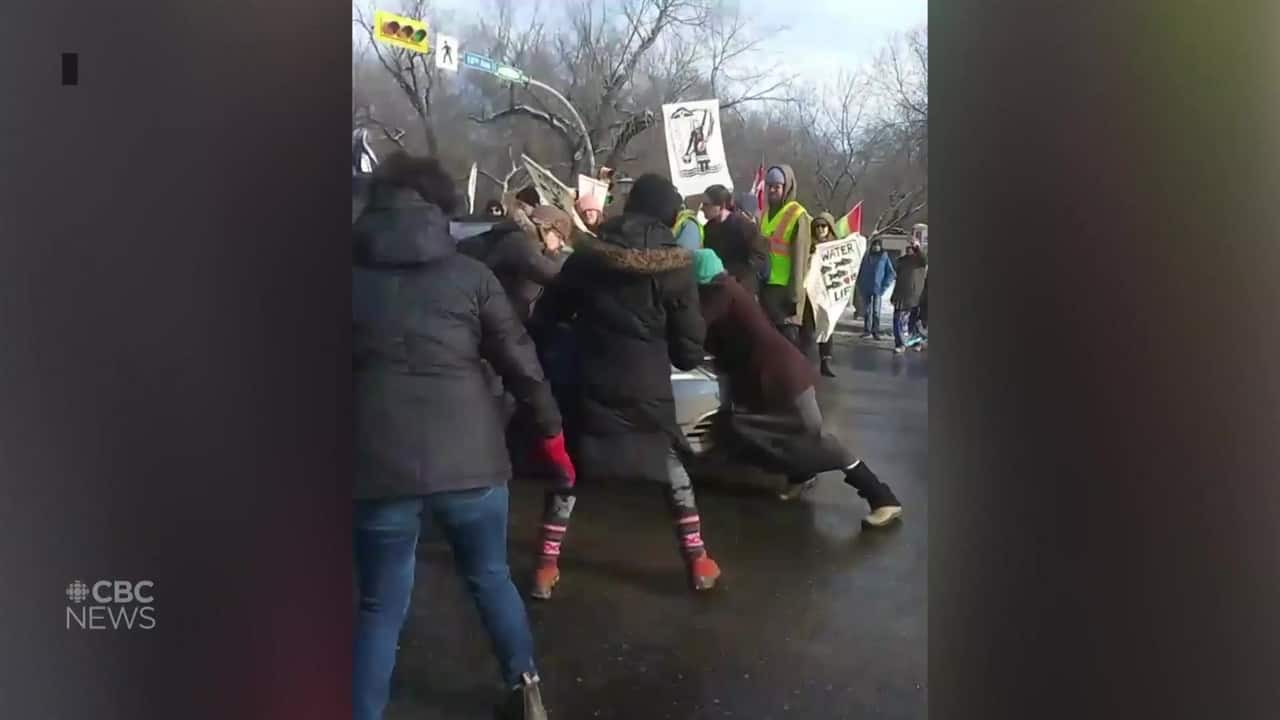 12 months agoVideo
0:50
Police in Regina are investigating after a car drove through a group of protesters in Regina over the weekend. 0:50

Youth from Winnipeg have been occupying the constituency office of Dan Vandal, the minister of northern affairs, since last Tuesday.

On Friday, dozens of people held a rally outside of an RCMP office and briefly shut down traffic on Portage Avenue.

In Tyendinaga Mohawk Territory, passenger and freight rail traffic have been stopped for five days along one of the busiest rail corridors in Canada.

The blockade near Belleville, Ont., is still affecting passenger train service between Toronto and Montreal, and Toronto and Ottawa.

On Friday, CN Rail obtained an injunction from the Ontario Superior Court of Justice in Toronto, which was served to demonstrators by CN police on Saturday afternoon.

Twenty Indigenous youth and allies have occupied the Ministry of Justice building in Ottawa.

About 20 youth are occupying the lobby of Justice Canada in solidarity with Wet’suwet’en. They say they won’t leave until they meet with Justice Minister Lametti. <a href="https://t.co/s4YJgxCn7i">pic.twitter.com/s4YJgxCn7i</a>

A news release issued Monday said the youth and allies will continue their occupation "until RCMP stand down, the demands of the hereditary leadership of the Wet'suwet'en peoples is respected, and all land defenders are released and cleared of all charges."